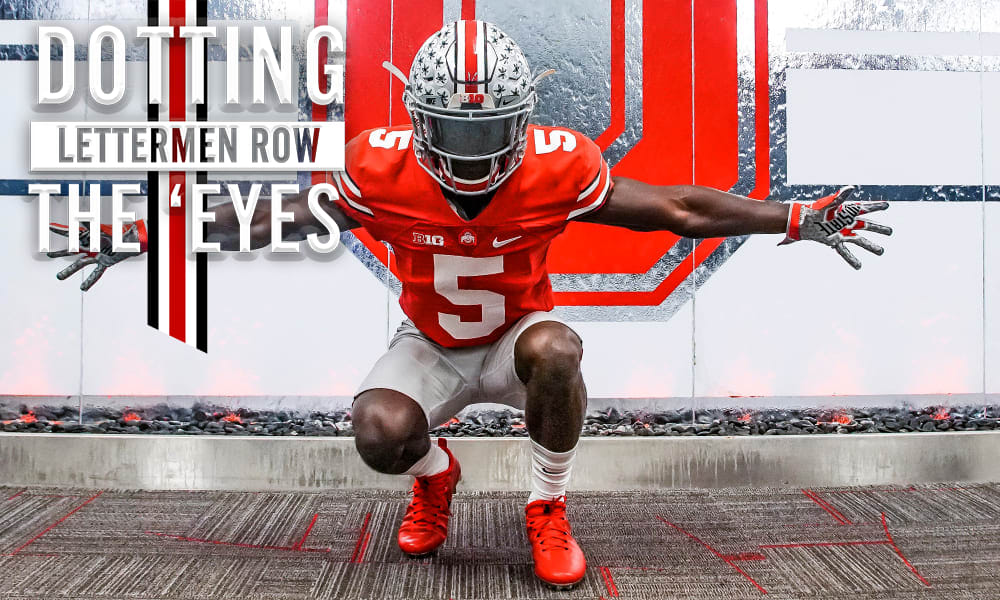 Stay in touch or be left out because Ohio State recruiting is a 24-hour, seven-day-per-week obsession. What’s the latest news as the Buckeyes build for the future? Get that and more Sunday through Thursday on Lettermen Row. Today’s update talks Rakim Jarrett and the latest on Ohio State’s tight end recruiting in 2020.

Is Rakim Jarrett close to a commitment? Does it matter?

A commitment is coming for Rakim Jarrett.

At least, that’s what you’re forced to infer if you’re a Twitter user after the country’s second-ranked receiver has been throwing social media into a tizzy with some recent posts.

Soon, of course, is subjective. Jarrett has stated multiple times that he would’ve committed to Ohio State during one of his previous visits to the school if his mother had accompanied him to campus.

“Mom couldn’t make it,” he said in November. “It might’ve been a done deal if she would’ve came, but she didn’t so I’ll play the waiting game and go out and see some colleges. I’ll bring her up with me next time for sure.”

But there’s been no next time yet. That’s expected to change in mid-April, but there’s been no confirmation that Jarrett will attend the Buckeyes spring game on April 13. Jarrett has, though, been to Tennessee and Georgia — with a second visit coming up — and is set to be at Alabama this weekend. Those visits could be why the 6-foot-tall, 182-pound Jarrett said he’s approaching “crunch time” in his recruitment.

It could be reasoned that key stretch is coming because those schools he’s recently visited are the most logical threats to Ohio State landing Jarrett as he heads into mid-April. It could also be reasoned that no matter what happens anytime soon — if a commitment does indeed happen — the end of this recruitment isn’t anywhere near in sight. It has all the feels of a winding road until signing day.

We’ve heard it from a number of recruits over the last two or three months that Ohio State wants to land two tight ends in the Class of 2020.

But it’s been increasingly difficult to see where the two guys come from, especially if it’s expected to be one national-name and one in-state prospect filling these spots.

The Buckeyes hosted Cam Large last week, and Mark Redman was in town on the first of March. Redman looks to be the top target at the position, and that makes his spring visit an important one because it’s never easy to pull anyone out of California. Still, the 6-foot-6, 250-pound target from Corona Del Mar (Newport Beach) 4-star has become a priority for Ohio State.

There are still others, like New Jersey’s Lukas Ungar and Las Vegas 5-star Darnell Washington, who are planning to visit, but it’s hard to consider either a real target at this time until that happens.

It’s a particularly strong year in the state of Ohio for tight ends, so the Buckeyes will likely end up making a tough choice between Grandview Heights 3-star Luke Lachey, Manfield’s Clay Caudill, St. Ignatius prospect Sam Daugstrup and Cincinnati Elder’s Joe Royer, who is emerging as a player to watch this spring.

Which of that group ends up in Columbus? The safe bet is Lachey because he’s a program legacy, but there could be an intriguing camp competition at Ohio State this summer.

One of the NFL’s all-time great receivers was in Columbus on Tuesday — without his 5-star son.

Former Indianapolis Colts great Marvin Harrison was at Ohio State on Tuesday visiting the program, much to the excitement of Terry McLaurin.

Growing up in Indianapolis I watched this mans every move, wanted to be just like him when I played. I still got his fathead on my wall in Indy. Told him thanks for inspiring me to be the best. Never flashy, just always do your job.💪🏾 #OGMarvin pic.twitter.com/gRKB7ruJHZ

“There are two people in my life I’ve been ‘starstruck’ meeting,” McLaurin joked with Lettermen Row on Tuesday afternoon. “President Barack Obama and this man.

Harrison was on campus, according to sources at Ohio State, to check out the Buckeyes up close and personal and to get introduced to receivers coach Brian Hartline. Hartline is recruiting his son, Marvin Harrison Jr., who is a top target in the Class of 2021 for Ohio State.

The younger Harrison was not on the visit.

One of the country’s most athletic 2020 interior lineman will visit Ohio State at the end of April.

“My little brothers are doing the Rivals.com camp in Cincinnati [on April 27],” Morris said. “So I’ll visit there that weekend.”

The Buckeyes have four offensive linemen committed in 2020, and Morris is one of a dozen or more options to still be added to the class. A 6-foot-4, 290-pound prospect who prefers to play left tackle, Morris is the country’s sixth-ranked guard in the 247Sports composite rankings. He’s been in regular contact with the Ohio State coaches regularly.

“I talk to them all the time,” he said. “[Offensive line coach Greg] Studrawa and [assistant line coach Eric] Miscuda. They feel like I can play any position on the line. They are in the thick of things [in his recruitment].”