Have a question about Ohio State recruiting? This is the place for you, five days a week. Submit your questions on Twitter or on the Lettermen Row forums. Check in daily to see what’s on the mind of Buckeyes fans all over the country. Today we’re talking about how Ohio State’s offensive adaptation could change the way it recruits.

I’m absolutely fine with taking today’s question and turning it into two parts, because I think there are two very different things at play here.

I’ll start with the two players mentioned who have an offer from Ohio State. Paris Johnson has been committed to Ohio State since last June, he’s the top target along the offensive line for the program and will continue to be the top target all the way to signing day.

How firm is his commitment? That’s open for interpretation. Johnson has made a handful of visits to Ohio State and other schools since the retirement of Urban Meyer but has stayed committed throughout that time. To some skeptics, the visits he’s taking are proof positive that he’s not locked in with Ohio State, but I just don’t see it that way. He’s a kid making the biggest decision of his young life and should make darn sure of it — but there’s no doubt in my mind that Johnson loves Ohio State and wants to be part of the program. I believe it will take something major happening again to get him out of the commitment column.

NOTE: He talked about his recruitment in a recent episode of Birminology.

Darrion Henry also joined us on Birminology to discuss his recruitment, and I remain confident that he will ultimately pick Ohio State over Michigan, Notre Dame and a host of other schools primarily because of his desire to be coached up by Larry Johnson and Greg Mattison. He has a great relationship with those two men, and he trusts them with his development. When? I believe that could be today, tomorrow or six months from now, I just think the fit for Henry and the Buckeyes need at the position is the right fit.

Henry and Johnson have each talked about the desire to have Cincinnati Princeton linebacker Jaheim Thomas play alongside them in college. And to this point, that’s a holdup for Ohio State because it is one of the only programs recruiting the trio that haven’t offered the 4-star linebacker.

So we’re forced to ask ourselves which is most likely: Are the Buckeyes — one of the country’s premier NFL-developing programs and top evaluators of talent — just missing the boat by holding off from offering Thomas? Or are other programs, awarer that an immediate commitment isn’t likely just trying to use the offer to Thomas as a leverage point for his higher-ranked teammate? The Buckeyes will not offer just to try to provide security to Johnson and Henry. Thomas is likely going to need to come to Columbus, camp for Ohio State and show exactly why he’s the right fit — and may need to be willing to listen to the idea of playing a different position, because he may very well grow into a defensive lineman. 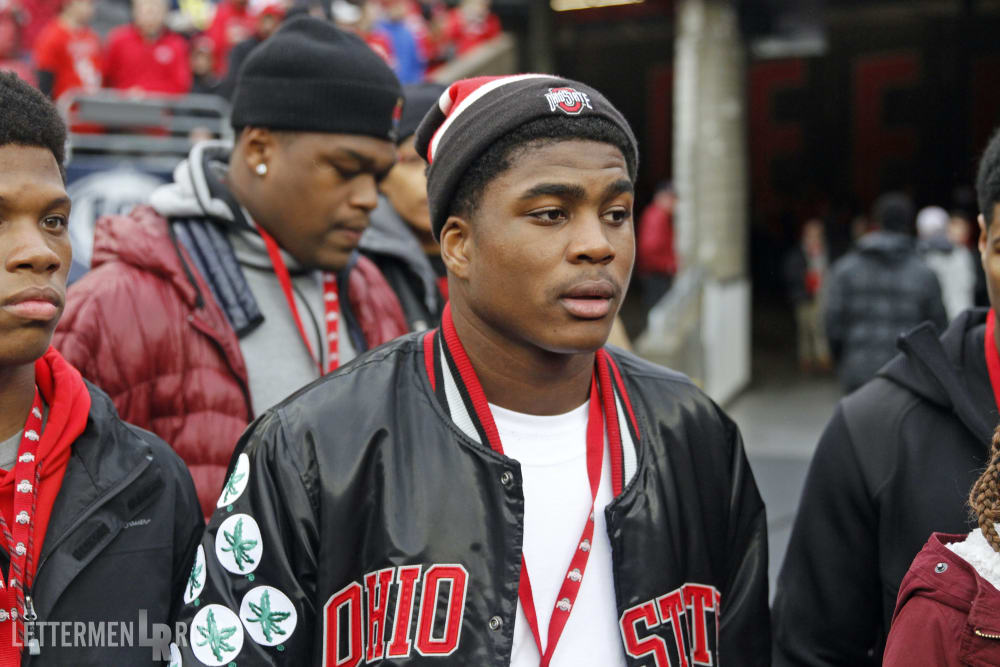 AJ Kirk is a top 30 talent nationally and doesn’t have an Ohio State offer yet. (Birm/Lettermen Row)

It’s not a matter of whether or not Thomas is good enough to play at Ohio State or a matter of being uncertain about his future position, it’s probably a little bit of both. He’s going to need to give a definitive answer to both questions. I believe the same can be said about 2021 5-star talent A.J. Kirk, and I know that sounds crazy to say about a young guy that’s ranked as a top-30 player already in his class.

Kirk is a 6-foot, 200-pound safety and the younger brother of former Buckeyes All-American Mike Doss, lives just minutes away from Ohio State in Dublin and didn’t camp with the Buckeyes last summer before his sophomore season, passing up a prime opportunity for the program to get their eyes on him. Why didn’t he? Who knows, but this approaching summer is another chance for him to do that and to answer any questions about if he’s a linebacker or a defensive back at the next level.

What makes Kirk so intriguing is that the Buckeyes are fiddling around with the idea of dropping players like Brendon White and Jahsen Wint into a combination linebacker/safety role, and that would seem to be a better fit for Kirk and could help find a spot for him in the defense. Either way, I think the talented young athlete would be best served by putting his talents on display directly for Ohio State so that an in-person evaluation can be done rather than relying on what can be an inconsistent game film.