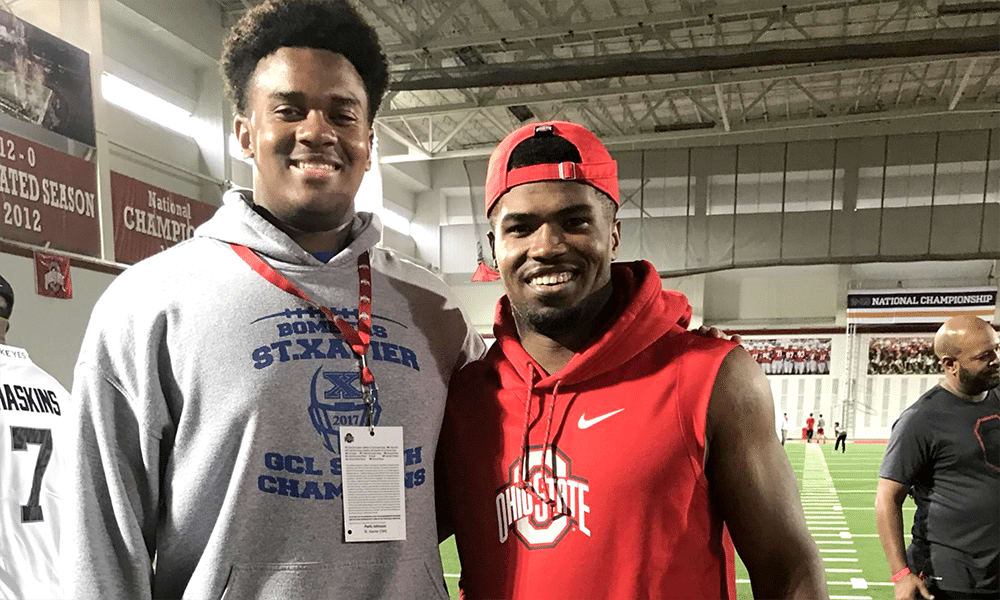 There was a bit of a surprise on Thursday night when 5-star 2020 offensive line prospect Paris Johnson decided to announce his college choice — on Twitter, at 10:45 p.m..

The fact that he picked the Buckeyes was not a shock. Ohio State had been the leader in the clubhouse for the 6-foot-7, 285-pound Johnson for a while now. A handful of visits to the country’s premier college football programs only helped strengthen his point-of-view that he belonged with the Buckeyes.

“[The visits to other programs] did help,” Johnson told Lettermen Row. “But I felt like I always knew in the back of my mind that the Ohio State University was the best program for me.”

On Friday, he expounded a little bit on his choice and what comes next now that he’s locked in to a Scarlet-and-Gray future. He finalized his choice in his mind two days before the decision.

“The moment came through prayer and God’s timing,” he said. “I talked with my family and coaching staff as confirmation.”

What were the steps taken to get to that point? It was really pretty simple.

“Just re-analyzing all of the benefits that Ohio State offered for my family and me,” Johnson said. “It’s close to home. They have an elite football program with great education, and the opportunity to compete for national championships while representing my home state on the uniform is special.”

Now Johnson is planning to flip roles and become a recruiter for Ohio State. He doesn’t have any specific guy he’s chasing, but he knows that to make it at Ohio State, it takes a special person and talent.

“Our group will be the best class in the nation,” he said. “We have the opportunity to great build relationships within our class and build upon it.

“My top target is whoever best fits the culture of the program. People that will continue the standard and tradition of success for the program.”

“Ohio State is very high on my list,” Atteberry told Lettermen Row. “The pride of the city of Columbus. The pride they have for the university stood out to me a lot. It was very impressive.”

The Buckeyes offered Atteberry during his visit, and it’s an offer the 6-foot-5, 260-pound tackle – who is being recruited at guard by Ohio State – had been waiting for.

“It’s a dream,” he said. “Ever since I was young [they’ve been his dream school.] Because of urban Meyer and just being a fan.”

Is commitment No. 4 in the Buckeyes 2020 recruiting class coming soon?

The Empire Strikes Back

If you follow Ohio State recruiting, by now you’re well aware of the name Zach Harrison. The country’s fourth-ranked overall 2019 prospect and Ohio’s top-ranked player visited Michigan and Ohio State last week, and since then both schools have cranked up their graphics departments and attempted to use the power of suggestion on recruits everywhere.

But it’s absolutely clear that each was aimed pretty squarely on the 6-foot-5, 245-pound defensive end from Olentangy (Ohio) Orange High School.

First, it was Michigan, showcasing for Harrison that yes, good players from Ohio have actually gone to Michigan in the past and succeeded.

“To Be Yourself In A World That Is Constantly Trying To 〽️ake You Something Else Is The Greatest Accomplish〽️ent.” – Ralph Waldo Emerson #DoYou #GoBlue 🔵 pic.twitter.com/yPi69s3CUS

A nice graphic, no doubt, even if none of the players pictured from this century have ever beaten the Buckeyes. Plus, the ones from earlier than 2000 were playing college football long before – and in some cases very long before – Harrison and the rest of today’s current crop of recruits were alive.

Ohio State’s staff pays close attention to Twitter, so it wasn’t a huge shock when just a few hours later, the Buckeyes fired back across the bow at the Wolverines with some artwork of their own.

Apparently, there’s been some good players from Ohio that went to Ohio State as well. The catch? You don’t have to go back to Madden ’98 to use them on a video game.

All is fair in love and recruiting.

Speaking of Michigan, I was up in Detroit on Thursday at the Sound Mind/Sound Body 7-on-7 tournament and got a chance to catch up with Buckeyes commitment Dwan Mathis.

Mathis was not the only big-time talent on the field, though, and a host of players with Ohio State offers put their best foot forward in a very competitive 7-on-7 scene. There was also, of course, some recruiting talk.

Among the biggest news from Thursday night: