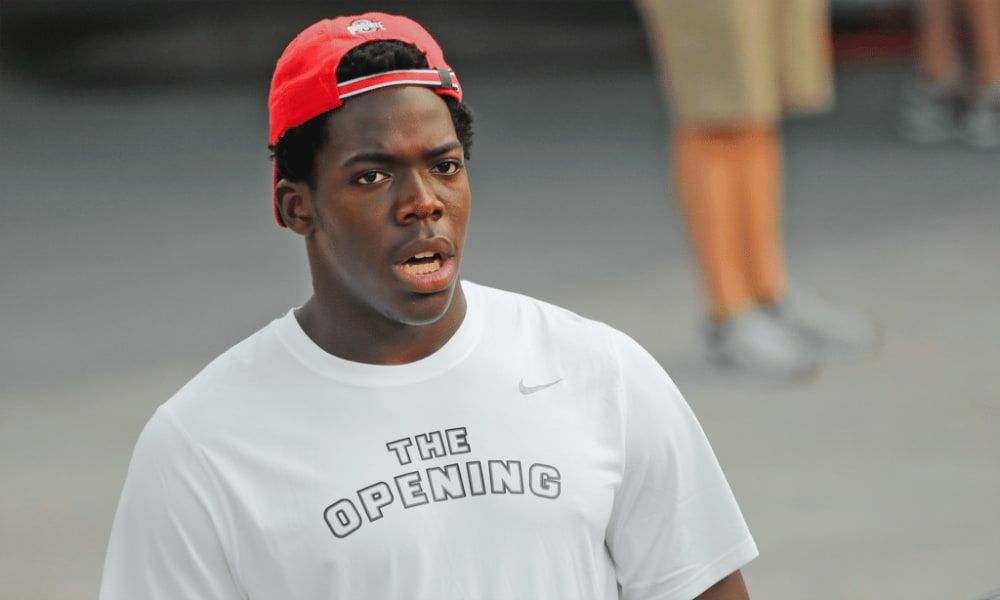 Ohio State had a big weekend on campus and the biggest visitor was 5-star defensive end Zach Harrison. (Zach Harrison/Courtesy)

How did it go with Zach Harrison?

First of all, know this about 5-star defensive end Zach Harrison: He’s as good a college football prospect as you’ll ever see, but he’s also as private as any player in recent memory. There will not be much public commenting from Harrison about his visits to Michigan and Ohio State over the last five days — if he makes any at all.

Lettermen Row reached out to him for an update on Monday morning after he stayed at Ohio State overnight in a hotel on Sunday as the recruiting period came to an end. Harrison was quick and respectful in his reply, but he was still guarded.

“I need some time to soak this all in,” Harrison said.

So that’s that. No generic comments or other platitudes being expressed by Harrison, but it pretty much goes without saying that he certainly had a good time. He and his mother arrived on campus with the Buckeyes on Saturday and spent time with Larry Johnson and the rest of the coaching staff again, as scheduled.

At the risk of sounding out of touch, everything is still going as planned with Ohio State and the 6-foot-5, 245-pound Harrison.

That doesn’t mean there’s not work to be done, though. Harrison talks to Ohio State commit Cade Stover now and then, but to this point he’s not yet built any real good relationships with other current verbals in the class. In fact, he may have better friendships right now with kids committed elsewhere — including at Michigan.

Using that as one of the reasons, those close to Michigan recruiting have pointed to their time with him as reason for increased optimism, though they’re hardly counting any chickens. Does that mean there’s concern in Columbus about Harrison? I’m reluctant to call it concern, but Ohio State certainly isn’t celebrating yet. The current crop of Buckeyes commitments can go a long way toward wrapping this recruitment up if they’re able to get to know the country’s No. 4-ranked player a bit better.

Comfort and relationships, right? Look for Garrett Wilson and Harry Miller to step up to the plate first in Dallas at The Opening next week.

Where do things stand with Ohio State and wide receivers?

Ohio State had three 4-star wide receivers on campus taking official visits over the weekend, and at present, there’s a lot of optimism that all three could be Buckeyes if Urban Meyer and the rest of his staff decide to open the door for each.

Lettermen Row spoke with Jameson Williams on Monday, but to this point we’ve been unable to get Marcus Washington and Elijah Higgins to comment directly on their visits. I have had a chance to talk with a few sources close to Ohio State about the weekend, though, and here’s a snapshot of where things stand.

Have the Buckeyes won the Battle? Has the war just begun?

Another player that everyone who follows Ohio State recruiting has been expecting a commitment from is Fort Lauderdale (Fla.) 4-star defensive back Jordan Battle. Battle, like every official visitor not named Dwan Mathis, left campus as a still-uncommitted prospect.

I don’t expect that to be the case for long, though. Battle went back home, but those in the know here believe that a commitment could come Ohio State’s way by midweek.

Battle, the country’s 12th-ranked safety, will still be a top target for the Miami Hurricanes and others, but for now, it looks likely he’ll commit to Ohio State.

Fortunately for the Buckeyes, they had two players they really like on campus this weekend and started the process of heavily recruiting each of them. The first, New York’s Jared Harrison-Hunte, made an unofficial visit for Friday Night Lights. The second, Missouri’s Etinosa Reuben, made his official visit to Ohio State and told Lettermen Row he has a plan for committing prior to the start of his senior season.

The Buckeyes are likely to take two defensive tackles in the Class of 2019. Because of their excellent recruiting at the position in 2017 and 2018, if there’s a year to take “projects” at the position, this may be it. Reuben has only played football for two years and is extremely raw, but the Buckeyes see the chance for him to turn into a big-time player.

With the recruiting dead period now here, Ohio State will have to reassess its recruiting board. Defensive tackle is one of the positions that is sure to see a shakeup. Reuben could be a name to watch closely moving forward.