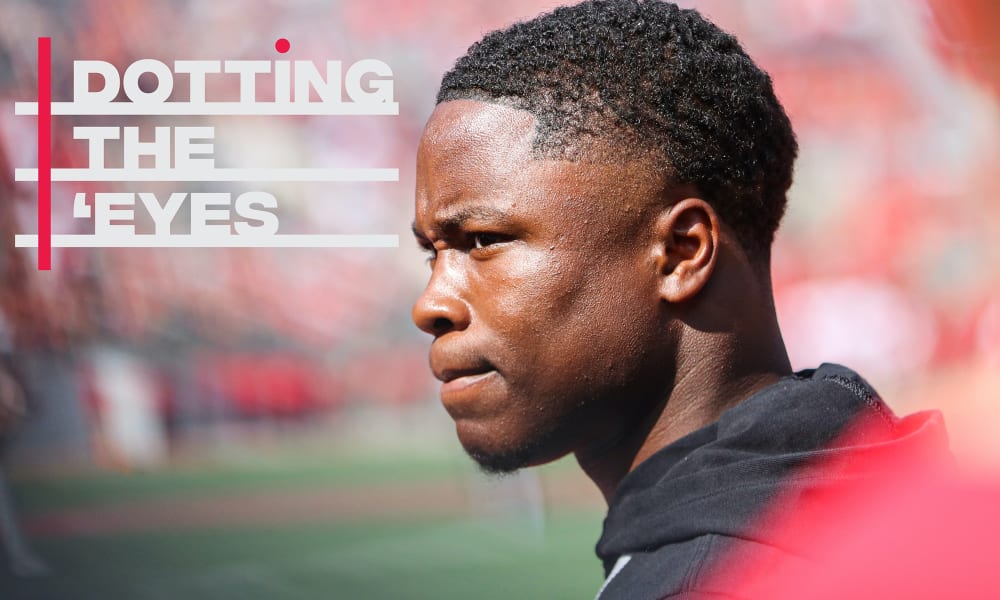 Mookie Cooper is still waiting for word on his senior season and plans to visit at Ohio State again. (Birm/Lettermen Row)

Stay in touch or be left out because Ohio State recruiting is a 24-hour, seven-day-per-week obsession. What’s the latest news as the Buckeyes build for the future? Get that and more Sunday through Thursday on Lettermen Row. Monday’s notebook touches on Mookie Cooper’s official visit, introduces another big-time 2021 tight end and more.

There’s no answer yet for Mookie Cooper about his senior season. Fortunately for Cooper, the country’s 14th-ranked wide receiver, there’s one question he doesn’t need to consider — and he is still thrilled with his decision to be an Ohio State commitment.

“I literally don’t think I could’ve picked a better place,” Cooper told Lettermen Row following his official visit in Columbus. “I’m just super relaxed there around everybody. The coaches, the rest of the staff. Everybody. Then the game topped it all off. It’s just a bunch of cool people to be around.

“I needed this trip.”

Cooper believed he would receive a response about his senior-season eligibility before heading to Columbus last week. He didn’t.

The hope for a resolution continues. But no matter what happens, he knows he’s got a home at Ohio State and began to see the role he’d play for the offense taking shape after watching Saturday’s 76-5 win over Miami (Ohio).

“I think it’d be kind of like K.J. Hill,” Cooper said. “With a little bit of how they use Demario McCall. I’m able to line up at receiver and run routes, but they can use me in motion sweeps and stuff like they did with Parris Campbell.”

The Buckeyes verbal spent most of his time with fellow commits like Paris Johnson and trying to help recruit Ryan Watts III, who was also on his official visit at Ohio State. Cooper believes the Buckeyes are in the mix for Watts and will put his recruiting hat back on in the near future, because he expects to return to Columbus at least one more time this season.

“I was working on [Watts] — he’s a good kid and I think he really likes us,” he said. “I’m coming back at least once for Penn State or Wisconsin, but maybe both games.”

Troy Stellato ready to return to Ohio State for next visit

Ohio State offered a scholarship to Fort Lauderdale (Fla.) Cardinal Gibbons 2021 wide receiver Troy Stellato just a little over a week ago. The fast-rising junior didn’t take long to get a return trip to Columbus scheduled, and it will be his third since April.

Stellato has added offers from Alabama, Georgia, Penn State, Florida and others since the one came from Buckeyes, and he will return to Ohio State for the matchup against Michigan State next week. For the 6-foot-1, 175-pound receiver, the visit is a chance to make sure the rest of his family gets to know the coaches he’s talking to almost daily.

“I talk to them almost every day,” Stellato told Lettermen Row. “I speak to [Ryan Day] a little, but mainly [assistant receivers coach] Keenan Bailey and Brian Hartline. All of the coaches want to meet the rest of my family, so my brother and mom will be up on this next visit with me.”

The Buckeyes are a program that Stellato has called a “dream school,” and he made trips to campus in April for the Ohio State spring game and returned in June for a one-day camp. He will visit Alabama this weekend before returning to Columbus.

Another top 2021 prospect is making a trip to Ohio State for the Buckeyes home contest against the Spartans on Oct. 5.

Hudson Wolfe, a tight end from Savannah (Tenn. ) Hardin High School, will make his first trip north to check out Ohio State, which offered him a scholarship just about a week ago.

“I’ve been in contact with their coaches only a couple of days,” Wolfe told Lettermen Row shortly after receiving the offer from the Buckeyes. “[Tight ends coach Kevin] Wilson was the one to offer.

“It was my first time talking to Coach Wilson when he offered. They like my big frame and also my skill set, with me being able to block and be a threat down the field in the passing game.”

The country’s sixth-ranked tight end is eager to visit Ohio State next weekend.

“It’s definitely important to get up and visit,” he said. “I’m excited about going to just see what they have to offer and am planning on making it to the Michigan State game. They’re a great program having a lot of success and doing it the right way.”