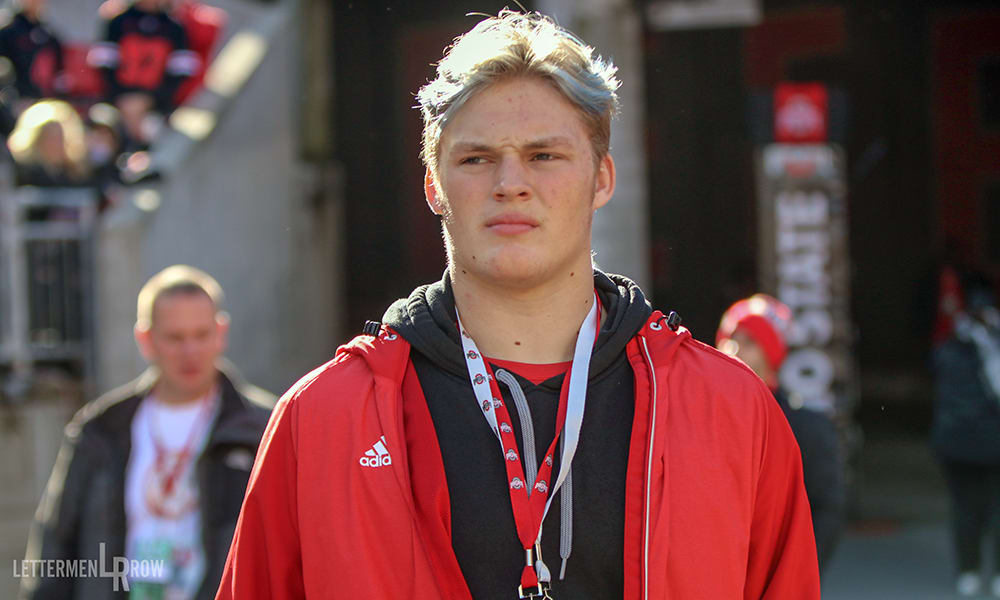 Braiden McGregor is a prospect Ohio State had serious interest in before he committed to Michigan. (Birm/Lettermen Row)

Have a question about Ohio State recruiting? This is the place for you, five days a week. Submit your questions on Twitter or on the Lettermen Row forums. Check-in daily to see what’s on the mind of Buckeyes fans all over the country. Thursday’s question asks if there are any Michigan commitments worth looking at if Jim Harbaugh were to somehow leave the Wolverines after this season.

With UM floundering, is there anyone OSU can poach from their class?

To be clear, the struggles happening in Ann Arbor have not done anything at this point to diminish Michigan’s success on the recruiting trail. The Wolverines have the Big Ten’s second-ranked recruiting class and have quietly put together a really strong group of 24 commitments from 13 different states.

The Michigan brand hasn’t suffered that much when it comes to recruiting because Jim Harbaugh is an excellent coach and a top-tier recruiter selling a historically great program at one of the nation’s best academic institutions. It’s easy to recruit good football players to Michigan, and that will continue to be the case no matter who is in charge in Ann Arbor.

That being the case, I don’t think there’s any chance that Ohio State could flip a current Wolverines commitment barring a coaching change. That’s probably not going to happen unless Michigan completely collapses upon itself, and I just don’t think that is going to happen, either.

As long as Harbaugh and his coaching staff are in place, the class will stay intact.

But in the event of that hypothetical collapse or Harbaugh moving back to the NFL, there are certainly prospects committed to the Wolverines that Ohio State would be interested in pursuing. The question is whether those young men and their families, who have certainly already begun to hate the Buckeyes as part of their Wolverines indoctrination, would return the interest.

One-time Ohio State target Makari Paige had a lot of interest in the Buckeyes. (Birm/Lettermen Row)

Ohio State’s recruiting class is mostly full already. But there are a couple of guys the Buckeyes would have to go after, and that list starts with Port Huron (Mich.) defensive end Braiden McGregor.

The country’s fourth-ranked strongside defensive end is a player the Buckeyes coaching staff is very high on, and he visited Columbus on multiple occasions early in his recruiting process. McGregor is first on this shortlist of recruits we’ll talk about, not only because of his upside and ceiling but because he plays a position that Ohio State is still looking to fill in 2020.

The same could also be said for St. Francis (Baltimore) running back Blake Corum. Corum took an official visit to Ohio State about two weeks before he verbally committed to Michigan, and Ryan Day is still looking for a tailback.

Another player who took an official visit to Columbus was West Bloomfield (Mich.) safety Makari Paige, and he was very close to committing to the Buckeyes. But confusion about how many spots were available for Ohio State helped push him to the Wolverines side of the aisle. For the Buckeyes, who are hoping to land Paige’s 2021 teammate Donovan Edwards, I’m sure they’d like to have another voice trying to persuade the young tailback.

The Buckeyes also were very involved with safety Jordan Morant, but the commitment of Lathan Ransom to Ohio State sort of removed the need for another safety, whether it be Morant or Paige. If there was a push to be made in the event of a hypothetical Harbaugh dismissal/departure, it’s my belief that Paige would be the more likely candidate for Ohio State.