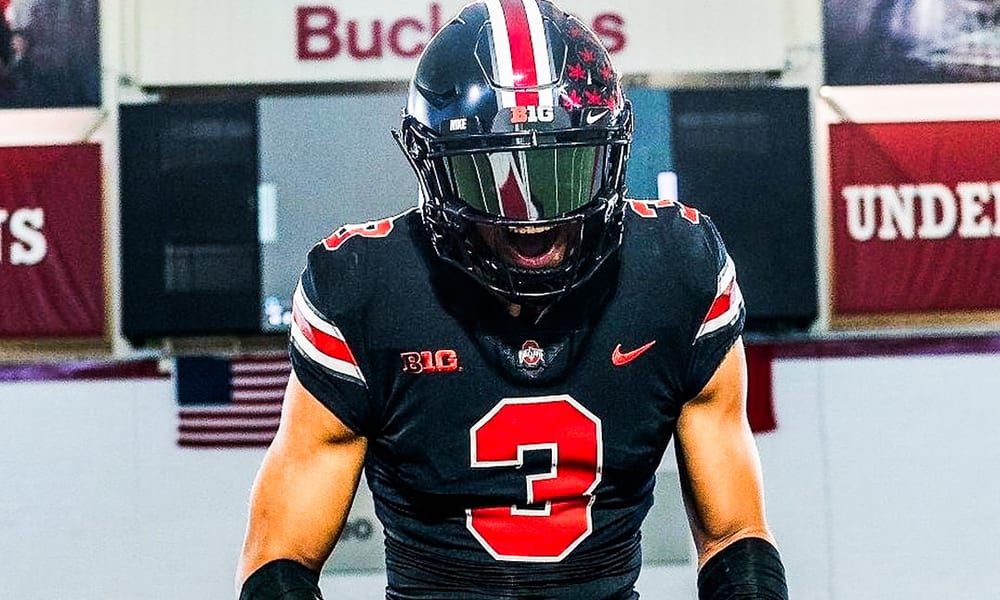 Jordan Morant has Ohio State and rival Michigan at the top of list. (Jordan Morant/Courtesy)

The country’s top-ranked safety made back-to-back visits to Ohio State and Michigan in the last week. As of Friday morning, the 6-foot-1, 195-pound safety says there’s no clear-cut leader between the pair of bitter enemies.

“I would say Michigan and Ohio State are leaders,” Morant told Lettermen Row. “It’s hard to say which one is leading. Hard. All I know is they’re both up there.”

Michigan and Penn State both have 247Sports.com crystal ball predictions for Morant, and Ohio State doesn’t. But his glowing review about his Buckeyes visit may change some minds.

“I honestly didn’t expect much until we got on campus,” he said. “You really don’t know what to expect in Ohio, you know? When I got to campus I was just blown away.

“The Ohio State visit was just spectacular. I really loved it, and I definitely want to come back again because of how special that place is. What really stood out was just how nice the campus actually was, and the atmosphere there was just amazing. I really loved the facilities they had there. I really enjoyed everything about it.”

Morant has ties to each program, but none stronger than with the Wolverines. His coach at New Jersey power Bergen Catholic, Vito Campanile, is the oldest brother of Michigan assistant coach Antony Campanile, hired by Michigan away from Boston College in January. That connection has helped Michigan surge into the fore of this recruitment, but the young safety hasn’t felt added pressure to head to Ann Arbor because of it.

“He’s not really pushing anything, and he knows it’s all on me,” Morant said. “Whichever school I feel is in my best interest, then that’s my decision. But my coach is a big help with dealing with this process and makes sure that I’m not stressed about anything.”

When it comes to the Buckeyes, there are strong connections as well. Ohio State co-defensive coordinator Jeff Hafley is from Bergen County, and Buckeyes redshirt freshman Javontae Jean-Baptiste is a Bergen Catholic alum. Those two, along with a pair of safeties from New Jersey, helped show Morant around during his Monday afternoon trip to Columbus.

“Me and Jordan Fuller just talked, you know? We got to talk about some football and New Jersey and all that,” Morant said. “I also talked with Javontae,  who went to my school and [early-enrollee] Ronnie Hickman, who is also from New Jersey. So it was good to talk to them and see how they were doing at Ohio State.”

For most players making a college visit to Ohio State right now, the highlight is getting to meet Ryan Day and talking with him about his plans for the future. The loss of Urban Meyer is lessened by the knowledge that Day was his choice to take over the program in Columbus.

“Coach Day was a coach for Coach Meyer, so he definitely knows how to win games,” he said. “And he knows how to help this program succeed with our without Coach Meyer. So it’ll be interesting to see what will happen this year, but I thought he was a really cool guy and I liked what he had to say.

“He answered all my questions, most without me even having to ask them, so it was a good first time meeting. He definitely will take Ohio State far, and I would love to have him as a coach.”

Ohio State would love to have Morant as one of its future safeties. To reach that end, the Buckeyes will have to keep competing with the Wolverines and the relationships formed in Ann Arbor. This is a recruitment that may be a two-team race today, but it’s not anywhere near its end.

“I’m going to be taking my officials [to Ohio State and Michigan],” he said. “But it’ll be a hard decision, so I’ve just got to see where I would fit the most, and where I feel that it would be the best for me.

“I’ve decided I will be committing in December, so I can take it slow and get all of it down without rushing.”