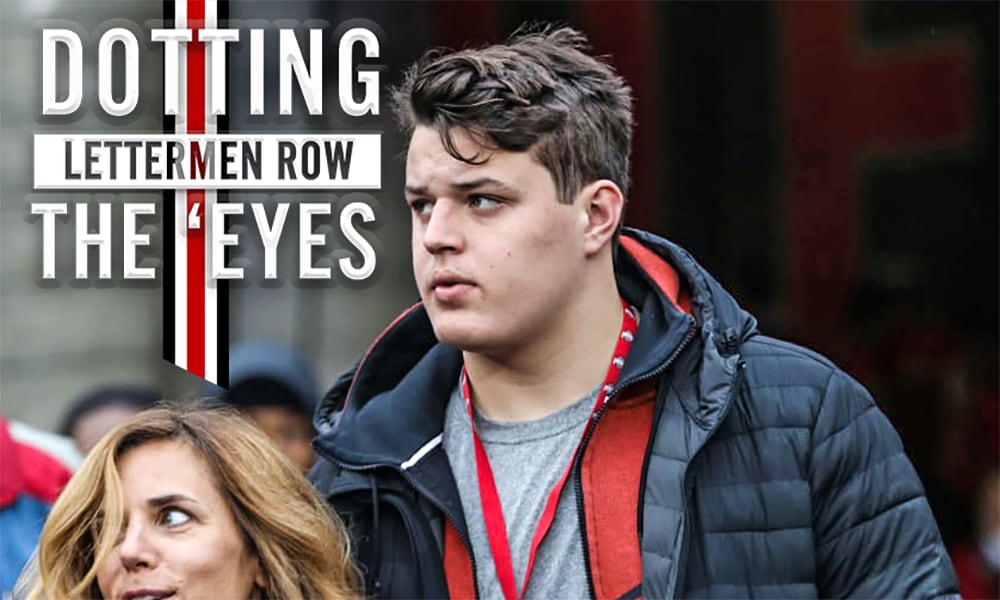 Michael Carmody has a tough decision ahead of him as Ohio State pursues him as a recruiting target. (Birm/Lettermen Row)

Stay in touch or be left out because Ohio State recruiting is a 24-hour, seven-day-per-week obsession. What’s the latest news as the Buckeyes build for the future? Get that and more Sunday through Thursday on Lettermen Row. Sunday afternoon’s update focuses on Paris Johnson and Marcus Rosemy, two key targets in Class of 2020 for the Buckeyes.

One of Ohio State’s top remaining 2020 targets added what could be a recruitment-altering scholarship offer over the weekend.

Extremely blessed to receive an offer from the University of Notre Dame! #GoIrish 🍀 pic.twitter.com/z8fXdCL68B

That is Mars (Pa.) 4-star tackle Michael Carmody, the country’s 12th-ranked offensive tackle. Way back in February when the Buckeyes offered the 6-foot-6, 280-pound lineman, it was mentioned here on Lettermen Row that the Irish could quickly work themselves into the mix whenever an offered was extended.

“He has 17 offers and his brother, Robby, is a Notre Dame basketball player. So expect the Irish to become a major player in his recruitment as well if they decide to offer.”

They have offered now, and though nothing is likely to happen overnight, it’s very reasonable to expect that this three-team race between Ohio State, Penn State and Virginia Tech has added another contestant.

Carmody recently visited Penn State again after taking a second spring-time trip to Columbus for the spring game. He’s one of the Midwest’s most athletic offensive line prospects and a major priority for Ryan Day and the Buckeyes. The questions from here are: What happens with the Irish, how hard do they push for him after extending an offer and did they wait too long to try and make a move?

Speaking of Notre Dame, the Irish are likely going to be winning the battle for Lake Forest (Ill.) 4-star prospect Rylie Mills, who will make his college choice on Monday night.

Mills, 6-foot-5 and 270-pounds, is the country’s eighth-ranked strongside defensive end. He recently made an official visit to Ohio State at the end of April, which came after an unofficial trip to Columbus last October. And though the Buckeyes have maintained regular contact with Mills since, there’s never been an overwhelming sense of confidence from that side of things — and that may be a result of the program never reaching a consensus on what position Mills would be playing at the next level.

Some close to the Buckeyes believe that Mills’ best future is on the offensive line, and that may have slowed the efforts by Ohio State to recruit him. But either way it’s not likely to have mattered. Notre Dame has been in a commanding position for his commitment for months, and that will likely be the choice ahead of the Buckeyes and Wisconsin.

A recent scholarship offer to Coziah Izzard could impact the recruitment of the 4-star defensive tackle.

“I wasn’t really surprised,” the 6-foot-3, 280-pound tackle told Lettermen Row. “But it’s a big offer for me. Ohio State will be in my top schools.”

The ninth-ranked prospect in Maryland, Izzard is the country’s 19th-ranked defensive tackle according to the 247Sports.com composite rankings. He plays at Dematha Catholic, the school that produced future Buckeyes first-round draft pick Chase Young. Right now it’s Maryland and Penn State who are the expected favorites, and the Terrapins recently hired former Dematha head coach Elijah Brooks. But it would unwise to count Ohio State out in Maryland, especially for a defensive lineman. Izzard has been in contact with the Buckeyes for just a few weeks now.

“I’ve not visited yet,” he said. “But we’ve only been talking for a few weeks.”

Let’s stay in Maryland for this final segment and touch base on another young player offered by the Buckeyes in that region.

Blessed to receive an offer from THE Ohio State University. pic.twitter.com/3A6Bo2C7a0

Malcolm Johnson is a 2021 prospect from St. Stephen’s & St. Agnes in Fort Washington (Md.), which sits just south of Washington D.C. The young receiver prospect has seen his recruitment pick up quite a bit in recent weeks, adding offers from Penn State and Michigan among his now nine early offers.

6-foot-1 and 180-pounds, Johnson is a two-sport star who also excels on the track for the Saints. He was offered by Larry Johnson, who recruits that area for the Buckeyes.

Ohio State has a number of early options at receiver in 2021, but Johnson sure looks like a player who could be worth watching in the future.