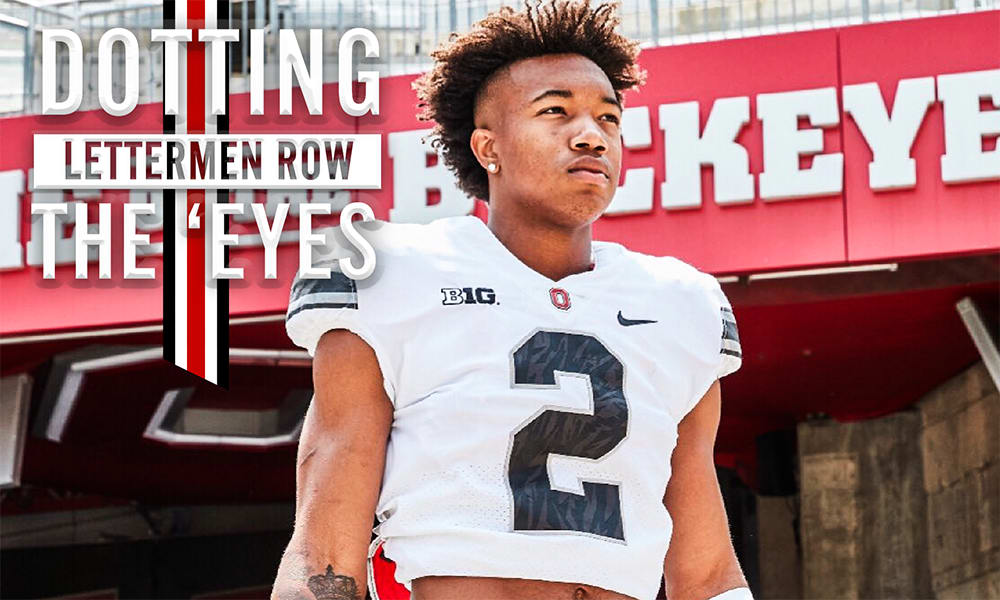 Kendall Milton made his first official visit and Ohio State appears to have set a high bar. (Kendall Milton/Twitter)

Stay in touch or be left out because Ohio State recruiting is a 24-hour, seven-day-per-week obsession. What’s the latest news as the Buckeyes build for the future? Get that and more Sunday through Thursday on Lettermen Row. Today we discuss the official visit of Kendall Milton, why Ohio State isn’t on the shortlist for Jaheim Thomas and more.

5-star running back Kendall Milton made his first official visit of what’s going to be a busy, important June. His first stop was to Ohio State, and now back home, the 6-foot-2, 220-pound tailback from Buchanan High School outside of Fresno, Calif., will rest for just a few days before making his second visit with a trip to LSU.

Georgia and Alabama will receive official visits in the weeks following that trip to Baton Rouge, though the order of those visits is apparently up in the air.

So, yes, it’s a busy few weeks for the country’s third-ranked running back and the player that is unequivocally the top target for Ohio State at the running back position in 2020.

Right now, after talking to a handful of different folks that were around Milton and his family during the weekend visit to Columbus, I think the Buckeyes are the team to beat in this recruitment. Milton was hosted by Garrett Wilson, and he had a chance to spend quality time with 5-star offensive tackle Paris Johnson, who made the trip up I-71 to visit Ohio State and help show Milton around.

I feel lucky, I should play the lottery #GoBucks ❤️ pic.twitter.com/n4ncZy2tWk

But there’s a long way to go and a very difficult SEC minefield to navigate. Every single person I spoke with about the trip returned an extremely positive message, albeit usually with an asterisk.

“It went great,” one of the sources told Lettermen Row. “It went really great. But you never know what happens from here.”

That uncertainty rests in the upcoming official visits to SEC Country. Though LSU gets the next shot at Milton, it’s the June 14 weekend visit to Georgia that I personally am watching closely. I believe it’s the Bulldogs that have the best chance right now to overtake the Buckeyes, but I don’t mean at all to rule out LSU or Alabama. That’d be silly to do so.

Bottom line as of now? It feels really good for Ohio State in the recruitment of Kendall Milton. But it’s not over by a longshot.

The Buckeyes hitting a home run during Kendall Milton’s visit was not really the news of the weekend or a surprise.

The top-seven schools announcement from Cincinnati Princeton linebacker/defensive end prospect Jaheim Thomas, however, may have been both.

Doing what’s best for me not a package deal… pic.twitter.com/EWQlM0kM83

Ohio State, which offered Thomas in April, isn’t on the list. Reading between the lines here, it’s not too difficult to figure out why. Thomas wants to be recruited for himself, not as a part of any kind of package deal. Not as a throw-in with teammate Darrion Henry or future teammate Paris Johnson.

Jaheim Thomas is a really good football prospect and one of the best players in Ohio. But there had been questions for months about how he would best fit into the Buckeyes defense, and the offer he received in April didn’t eradicate those concerns. There was always a hope that Thomas would pop up on campus in June and camp for the Buckeyes staff so that they would be able to more accurately assess whether or not he has the quickness to play along the defensive line, though he’s been resistant to that notion at this point.

Recruiting is about comfort and relationships, and that’s something written here over and over. Right now, the relationship between Ohio State and Jaheim Thomas is just not there, and it’s understandable because no one knows what position they want him to play. Thomas wants to go where he’s wanted and needed, and right now he’s likely not feeling that from the Buckeyes, hence his decision to exclude them from his list.

The Buckeyes have offered Desmet (St. Louis) 2021 defensive back Jakailin Johnson, a 4-star cornerback ranked as the country’s fifth-best player at the position in his cycle.

Johnson was offered by Buckeyes receivers coach Brian Hartline, who saw the 6-foot, 160-pound cornerback at a satellite camp outside of St. Louis on Friday evening. Hartline had actually begun his recruitment of Missouri’s second-ranked rising-junior prospect a few weeks back when he stopped by Desmet, the home of the 2020 Notre Dame wide receiver commitment Jordan Johnson.

“It feels great,” the cornerback prospect told Lettermen Row. “Ohio State is one of my dream schools. Coach Hartline said they want me to come over and visit and I’m going there on June 21.”

After months of being recruited by,Ohio State and taking an unofficial visit to the school in March, Southlake (Texas) tight end Blake Smith finally added the offer from the Buckeyes he had been hoping for in the middle of last week.

And then he committed to Texas A&M.

So, Smith, who had intended to return to Ohio State in the near future, will not be back. And the Buckeyes are going to continue their search for a tight end or two in the Class of 2020.

With both Luke Lachey and Joe Royer expected to camp in Columbus on Thursday of this week, an answer (or two) could be on the way soon.