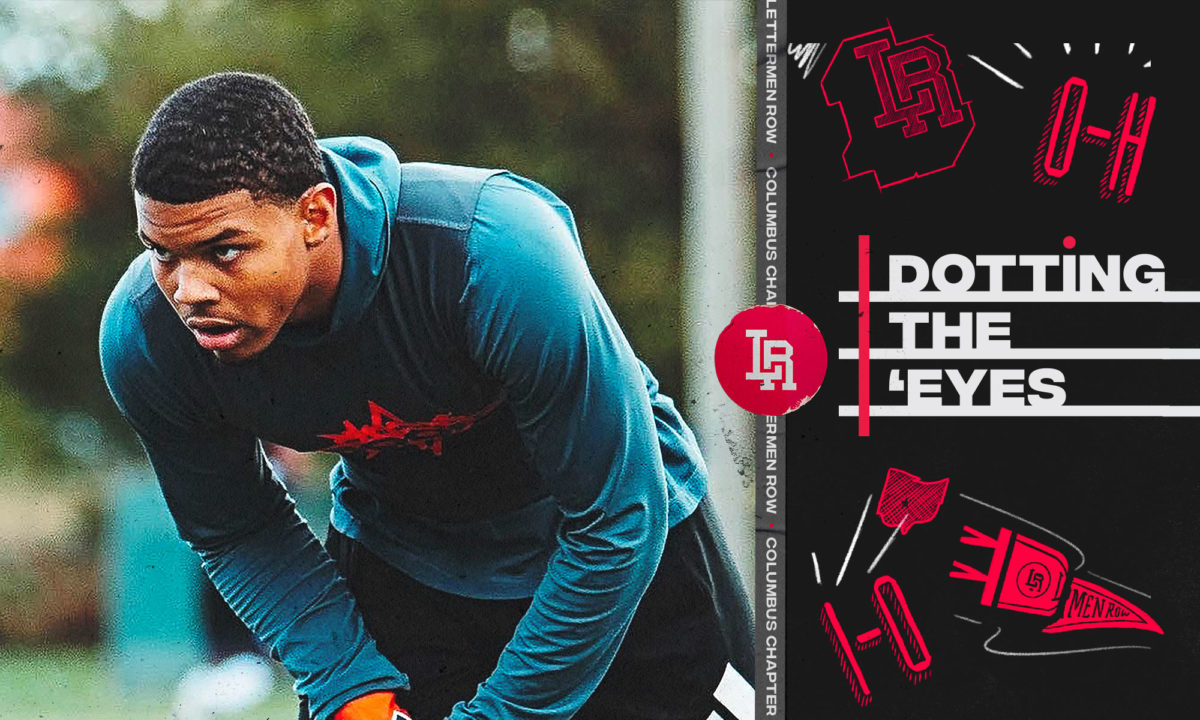 Kaleb Brown is ready to get to Ohio State for his first visit to Columbus. (Kaleb Brown/Twitter)

Stay in touch or be left out because Ohio State recruiting is a 24-hour, seven-day-per-week obsession. What’s the latest news as the Buckeyes build for the future? Get that and more Sunday through Thursday on Lettermen Row. Today’s notebook has the latest with a top receiver target and defensive line offer Curtis Neal.

The conversation around Kaleb Brown and Ohio State has been ramping up. The country’s No. 6-ranked receiver will make an official visit with the Buckeyes on June 7. Aside from spending time face-to-face — finally — with the Ohio State staff, the 5-foot-11, 180-pound Chicago-area standout is eager to see how he fits into Ryan Day’s offense.

“I want to learn about getting on the field there,” Brown told Lettermen Row. “How I could be used in their offense. That’s what I am looking forward to. They’ve told me that they see me playing the slot position but I am versatile and can play more than one position.”

Brian Hartline has been the coach talking to Brown on Ohio State’s behalf. That pair has been in contact for a long time but the lack of visit opportunities kept things relatively quiet. Brown isn’t a big talker and he’s used the extended dead period to sort out who was really interested in him.

“We check in every once in a while,” Brown said. “I click with [Brian Hartline] as a person. It’s always good conversations. My recruitment has been low-key since it started if you ask me. The dead period only showed who is serious about my future and well being.

“Coaches have been able to keep in contact and grow a relationship even if it isn’t in person and that’s been relatively the same since the star. Some schools are definitely trying more than others.”

Brown has no official visits planned yet and will see how June unfolds following his Buckeyes visit. There is no current plan for a commitment before January. The time between now and then will be spent sorting out his options.

“My plan is to commit at the All-American Game,” Brown said. “Education comes first, because there’s life after football and I always need a back up plan. I’m looking for comfortability, that is always a big factor. I want to be somewhere that I feel accepted and not just seen as an athlete, a place to call home away from home.”

That search for that begins in earnest in two weeks.

Ohio State is in a Big Ten battle for defensive tackle Curtis Neal.

The country’s No. 23-ranked interior lineman has just two official visits planned for June: Ohio State and Wisconsin. A pair of former teammates at William A. Hough (Cornelius, N.C.) are on the Badgers roster and he’s been a top target of Paul Chryst’s staff.

Of course, the Buckeyes also have a teammate of Neal’s in Evan Pryor, a 2021 running back signee. Larry Johnson leads the way for Ohio State in its recruiting efforts but Ryan Day and Kerry Coombs have been in contact as well. The 6-foot-1, 290-pound prospect suffered an ACL injury in late April and will have a procedure in late June that will prevent him from playing his senior season. He says that has not slowed down his recruitment or contact with the Buckeyes — or anyone else.

“I’m still being recruited as hard as I was before,” Neal told Lettermen Row. “It was hard pill to swallow at first, but I’m built to overcome obstacles. It’s in my blood. Coach LJ and Ryan Day didn’t have a problem with it. It’s another speed bump in the road.

“It doesn’t speed up my timeline or anything. I’m very comfortable right now.”

That timeline appears to be the end of June for a decision so there’s not much opportunity to happen faster anyway.

“Probably the end of June,” he said. “Somewhere close on that timetable. Sometime before [surgery.]”

“I’m ready to go and learn and compete,” Hicks told Lettermen Row. “They have a good defensive line coach he knows how to get players to the NFL and help them succeed at that level. I know Coach Johnson is a great coach.”

Hicks has 29 offers but Ohio State isn’t one of them yet.

“I know they go through a process with offering kids,” Hicks said. “I’m not really rushing it to happen.”

His date to visit is not yet decided but if he shows up in Columbus as planned, the offer will no doubt follow.