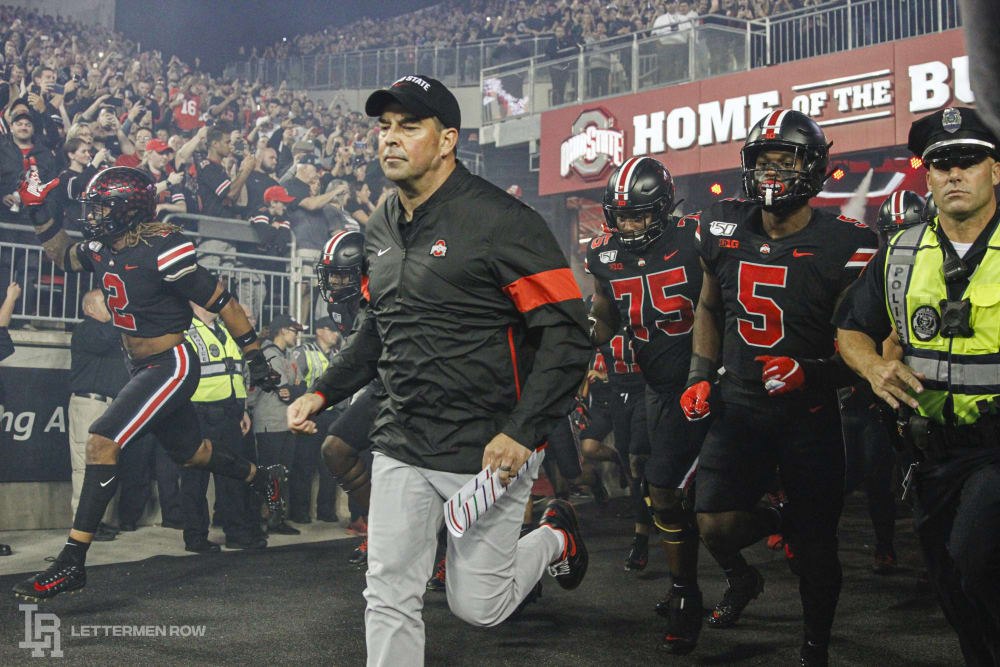 Ryan Day and Ohio State would absolutely be interested in a player like Justin Flowe. (Birm/Lettermen Row)

Have a question about Ohio State recruiting? This is the place for you, five days a week. Submit your questions on Twitter or on the Lettermen Row forums. Check-in daily to see what’s on the mind of Buckeyes fans all over the country. Tuesday’s question is about California 5-star linebacker Justin Flowe and whether or not his purported interest in an Ohio State visit could lead to something more substantial.

Is there any reason to think the Buckeyes legitimately have a shot at Justin Flowe?

The replies came fast and furious on Monday afternoon when I asked followers on Twitter what they wanted to talk about this week in this column’s space.

According to Adam Gorney of Rivals.com, the country’s top-ranked inside linebacker prospect and a top-five national prospect is considering taking a visit to Ohio State in the next month or so as he tries to finalize a college decision.

For months, most in the recruiting world have felt that Flowe was all but locked in on Clemson. And the Tigers are definitely very much in the mix for the 6-foot-2, 225-pound linebacker — but so is Georgia, Miami, USC and Oregon.

There had been some conversation with the Buckeyes months ago about a potential visit, but that never came to fruition. When Ohio State landed commitments from Cody Simon, Mitchell Melton and Kourt Williams, the need to recruit Flowe dissipated a bit, plus he opted against a summer visit to Columbus. So, things appeared dead in the water.

But make no mistake about it, if Justin Flowe is interested in bringing his talents to Ohio State, there’s no way the program would say no so if there’s a renewed interest from the 5-star prospect from Upland, Calif.

If Flowe truly wants to make a visit, there’s no doubt Ryan Day and Al Washington would be receptive to the idea.

The numbers are relatively tight for Ohio State in the Class of 2020. But the odds are still pretty good that this recruiting class could grow to 26 or 27 guys and with 23 current prospects set to sign in December — counting kicker Jake Seibert as a grayshirt since he won’t be on scholarship when next season starts. There is almost certainly going to be three or four more names added to the current crop of verbals.

One quarterback, one running back, one defensive lineman and then one wildcard. Is Flowe that wildcard? The odds of landing him are as good as the odds of flipping a player like Elias Ricks, so there’s nothing to lose by making a run at him.

There are a lot of things to consider here, and the odds are not in the Buckeyes favor to land Flowe even if he does make a visit to Columbus. But the fact that he’s discussing it is still newsworthy. But without a firm date for a visit set, it doesn’t make much sense for Ohio State to get too excited about the possibility.