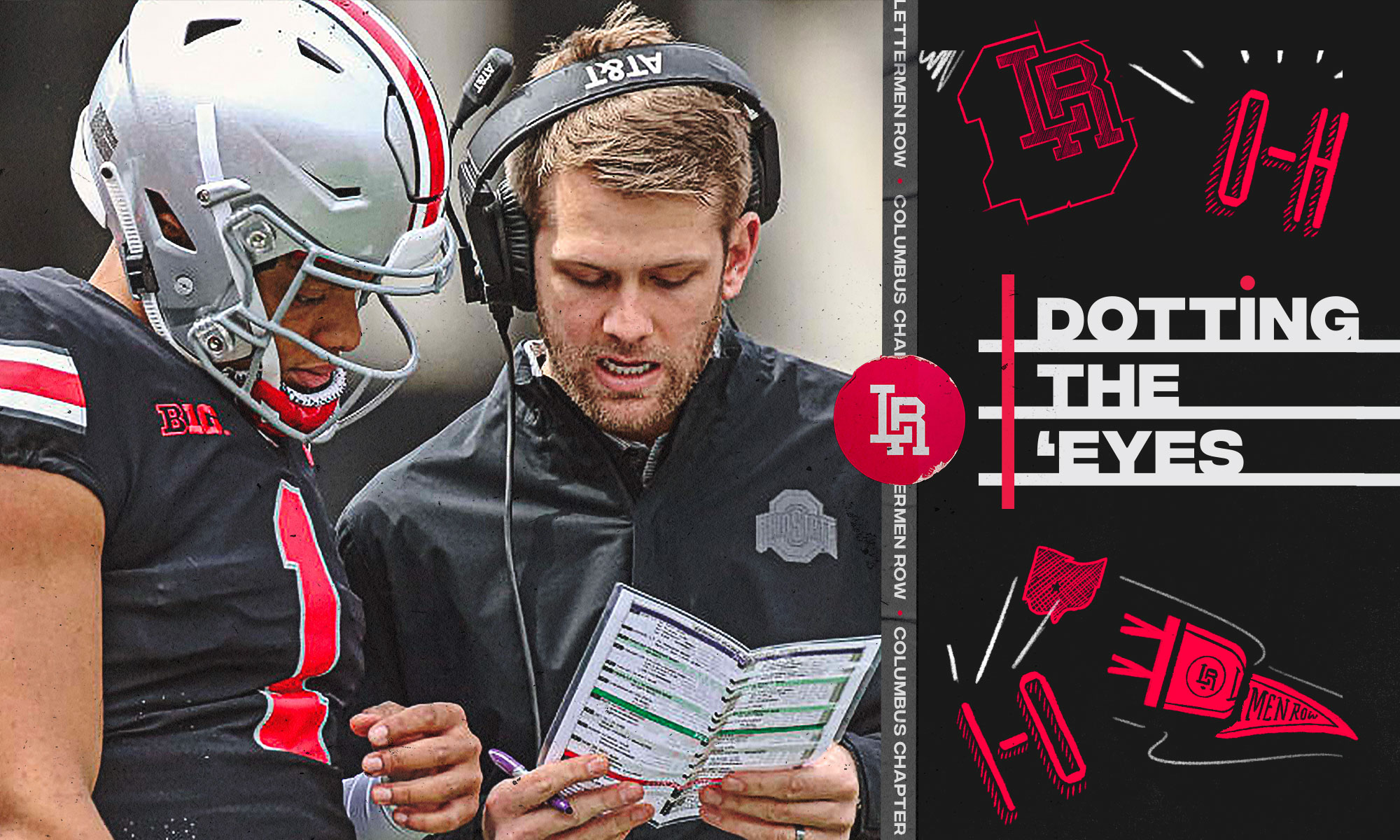 Corey Dennis has one less top quarterback prospect to chase in the Class of 2022. (Birm/Lettermen Row)

Stay in touch or be left out because Ohio State recruiting is a 24-hour, seven-day-per-week obsession. What’s the latest news as the Buckeyes build for the future? Get that and more Sunday through Thursday on Lettermen Row. The latest notebook has an update on a top quarterback prospect in the Class of 2022 and introduces another 2023 defensive lineman offered by Ohio State.

If there’s one position on the football field, recruiting wise, that has been affected the most by the Covid-19 pandemic, it’s probably quarterback. The Buckeyes and new quarterbacks coach Corey Dennis needed the summer for in-person evaluations in the Class of 2022. That was important not just so Ohio State could evaluate young quarterbacks, but also so young quarterbacks and their families would have a chance to evaluate Dennis.

The inability for that to happen has contributed to the Buckeyes being removed from consideration by Raburn (Ga.) 2022 quarterback Gunner Stockton, who narrowed his list to two schools on Thursday morning: Georgia and South Carolina.

Stockton, the country’s No. 2-ranked quarterback, was very high on the list for Ohio State. But without any real chance to grow the relationship with him, the effort from the Buckeyes never really had a chance to get off the ground.

For Dennis and Ohio State, the focus now tightens even more on top-ranked quarterback Quinn Ewers, California prospect Maalik Murphy and a handful of still-being-evaluated talents around the country as the Buckeyes wait for a chance to see updated film.

One young player the Buckeyes have seen enough of to know an offer was warranted is Derrick LeBlanc, a likely 5-star prospect in the Class of 2023 from Osceola (Kissimmee, Fla.) High School. Ohio State offered him on Wednesday night.

The offer, which is No. 38 for LeBlanc, came after a conversation with a handful of Buckeyes coaches.

“I was talking to Ryan Day,” LeBlanc told Lettermen Row. “He sent me over to Tony Alford, who recruits my area, and they told me they were talking about me with Coach [Larry] Johnson — me and my defensive tackle John Walker — and then they said they wanted to let me know I got offer there.

“It’s a big one to get, especially at my position. They produce some of the best defensive linemen in the country and have one of the country’s best coaches.”

Johnson has been in contact with the 6-foot-6, 255-pound 15-year-old since the end of his freshman season. Right now, he’s capable of playing with his hand in the dirt or lining up as an outside linebacker. There’s years of football ahead of him, but Leblanc is trying to piece things together as he looks at the future. There’s a desire to leave the state of Florida — if the opportunity is right.

“I like Florida and stuff,” he said. “But I want to see new places, so it doesn’t matter to me if I stay close to home. I want my parents to come to my games, but my parents will be happy if I’m succeeding and getting a good education. I’m taking classes so I can enroll early into whatever school I choose. Whenever I’m ready to make a decision, I’ll make the decision.”

It’s early, but Derrick LeBlanc — and likely his teammate John Walker — will be worth watching for Ohio State.

If the internet scuttlebutt is to believed — always a risky proposition — there could be good news coming for Ohio State on the recruiting trail in the near future. At least that’s the inference from Buckeyes 2022 verbal C.J. Hicks.

Who ready for another boom???#BIA🌰👀

To be fair, these sort of tweets often mean nothing at all. But as we’ve seen earlier this week, a lot of young players are making decisions as visits around the country remain an uncertainty. For players with an early Ohio State offer, choosing now and securing a spot in the Buckeyes recruiting class, seems like a prudent move.

Ohio State’s 2022 class currently has three commitments — all from Ohio — and if there’s an addition coming, odds are that it’s another in-state prospect.