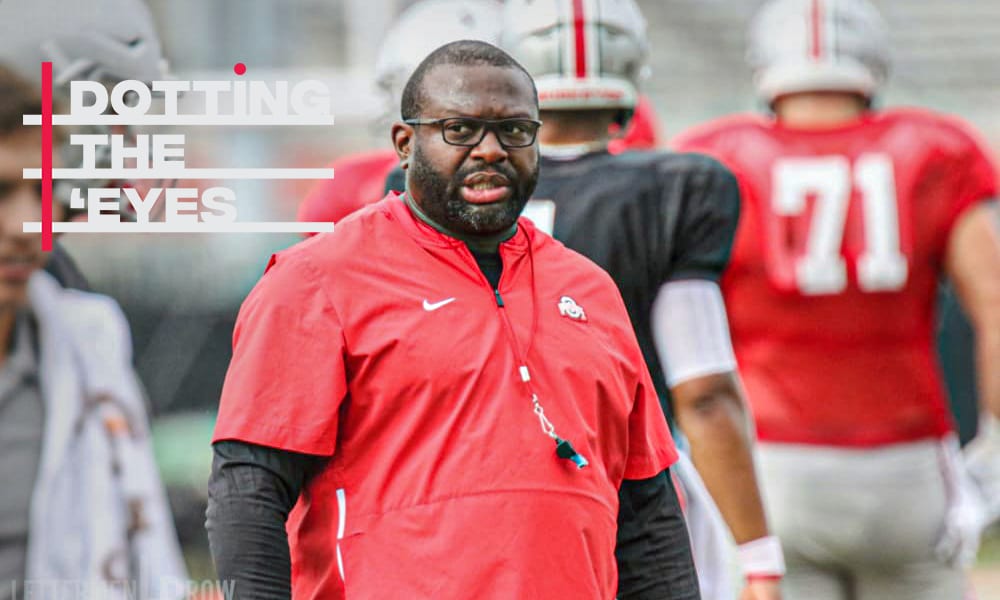 Ohio State assistant Tony Alford will play a big role in the recruitment of 5-star athlete Will Shipley. (Birm/Lettermen Row)

Stay in touch or be left out because Ohio State recruiting is a 24-hour, seven-day-per-week obsession. What’s the latest news as the Buckeyes build for the future? Get that and more Sunday through Thursday on Lettermen Row. Today’s notebook has an update on a big-time junior prospect visiting Ohio State and includes a new offer for a 2022 standout.

Will Shipley excited for first visit to Ohio State

Ohio State is set to host a number of big-time talents when it welcomes Wisconsin to the Horseshoe this weekend. One of the biggest names heading to town is Weddington (Matthews, N.C.) 5-star athlete Will Shipley, the No. 21-ranked prospect in the Class of 2021.

“I’ve been talking to [Buckeyes receivers coach Brian] Hartline weekly,” Shipley told Lettermen Row on Monday night. “I just got off the phone with him, actually. He’s excited that I am getting up there this weekend.”

Hartline isn’t the only Ohio State coach with a vested interest in the way Shipley’s recruitment turns out. He’s also been in regular contact with Tony Alford and Kevin Wilson, giving the Buckeyes a three-pronged approach as they try to capture the momentum in the 5-foot-11, 200-pound running back’s recruitment.

The tailback designation is key for Shipley. Because despite many programs viewing him as a threat in the passing game out of the slot, he wants to play out of the backfield in college. He’s been keying in on the Ohio State offense and how Ryan Day’s program uses the running back position and sees himself playing in a way similar to what Curtis Samuel used to do for the program.

“They use their running back in every way impossible,” he said. “And they are very successful in doing it.”

Shipley has been getting more active on the recruiting trail in recent weeks and has now taken visits to Clemson and Notre Dame after previous trips to Northwestern, Duke and North Carolina State. The utilization of the running back position is one thing he’s watching very closely on the trips he’s made.

“I watch how these schools use the running back,” Shipley said. “That, plus the relationship I have with the offensive coordinator and running backs coach, that means a lot to me.”

The Buckeyes offered a young defensive back from Texas on Monday night.

Wow! After a great talk with Ohio state coach I am beyond blessed and honored to receive my 3rd offer from Ohio State university #gobuckeyes pic.twitter.com/7vdCAQ4XDr

That is Denton sophomore Austin Jordan, a 5-foot-11, 185-pound star at Ryan High School. The offer from the Buckeyes is just the third for Jordan, who also holds scholarship opportunities from Baylor and Washington State.

Ohio State has done very well recruiting inside of Texas in recent years — and especially well evaluating and recruiting big-time cornerback prospects. So the early offer is a big one for Jordan, and it’s sure to kickstart his national recruiting attention.

There aren’t many spots left for the Buckeyes in the 2020 recruiting cycle. But one of the few remaining positions of need is the defensive line, specifically the defensive end position.

Larry Johnson is still searching for a rush end, and after hosting Tyler Baron for an official visit at the beginning of October, it seems clear that he remains the top priority at that spot. The talented 4-star prospect, though, doesn’t appear any closer to a decision now than he did following his trip to Columbus two weeks ago.

The good news for the Buckeyes is that the 6-foot-4, 255-pound Baron’s delay allows Johnson and the rest of the Ohio State staff to continue searching from other options without risk of losing out on Baron because of it. While the Knoxville (Tenn.) Catholic standout is the top target, other players remain in the mix — like Utah’s Xavier Carlton, who is expected to make an official visit to Ohio State in November.

Other than Baron and Carlton, the list of potential additions along the defensive line appears quite scarce. Johnson usually has something up his sleeve, though, so don’t be too surprised if new names pop up if Baron’s decision extends into December.