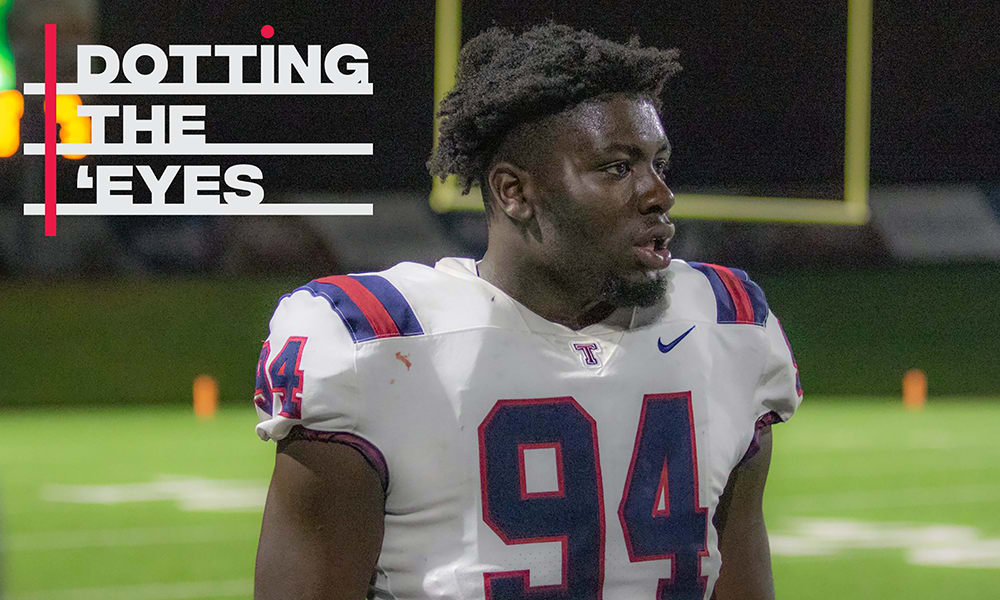 Stay in touch or be left out because Ohio State recruiting is a 24-hour, seven-day-per-week obsession. What’s the latest news as the Buckeyes build for the future? Get that and more Sunday through Thursday on Lettermen Row. On Monday, the notebook reviews the plans for Tunmise Adeleye and looks at the latest series of crystal ball predictions for receiver Troy Stellato.

The plan has been simple for Katy (Texas) Tompkins 2021 defensive lineman Tunmise Adeleye.

Commit on Jan. 8 and then ride off into the recruiting sunset focused only on his senior season and preparing for life as a college student-athlete.

But as things usually do in recruiting, a change in plans is in the works for the 5-star junior prospect.

Is a commitment coming early for Adeleye? That remains to be seen, and it’s more likely that the country’s No. 3-ranked strongside defensive end is going to slow down his recruitment instead of speeding it up. He’s been eager to return to Columbus for a second visit with Ohio State after being forced to cancel a planned trip in November, and he’s been unable to do that so far. Adeleye also wants to make a trip back to Oklahoma as well.

We will wait for the news from Adeleye on Tuesday, but don’t be surprised if his announcement is a delay in his decision. There’s no point in committing in January if a desire remains to take official visits elsewhere, and Adeleye isn’t a game-player just looking for attention.

Prepare for a narrowed down list that includes Alabama, Ohio State, Oklahoma and a few other programs who are still in the mix as the 6-foot-3, 260-pound defensive lineman with a look ahead toward a late spring or summertime decision.

There’s not a lot of things happening in the recruiting world right now because of the holiday season and the recruiting dead period that runs until the middle of January.

There will be a number of kids dropping lists of their top schools, though, and that includes Florida 4-star standout Charles Montgomery, who put the Buckeyes on his Monday.

Montgomery visited Columbus in November and said then that Ohio State would be a “top pick” for him. He followed through on that with his list, which is very Big Ten heavy.

“Ohio State is in my top five because they showed a lot amount of love,” Montgomery said.

The 5-foot-11, 175-pound athlete is being recruited primarily by Ohio State’s Tony Alford, but he hasn’t heard much from the Buckeyes in the last few weeks — although he he understands why.

“With the season they’re having,” he said. “I can’t complain.”

The relationship with Alford has played a vital role in Montgomery’s interest in the Buckeyes. He’s hoping to get back to campus for an official visit before making a college decision.

“Ohio State was actually my first unofficial visit, and I really like it up in Ohio,” he said. “We just have to keep up communication. I’m deciding on May 24. I’m hoping to take officials to all the schools in my top five.”

Troy Stellato, one of the top 2021 targets for Ohio State, is also from Florida. That’s why it’s noteworthy that on Sunday a pair of recruiting analysts who cover the Gators added “crystal ball” predictions on 247Sports.com in favor of Ohio State.

All four current predictions attached to Stellato are in the Buckeyes direction. But it’s notable that the most recent come from Florida analysts because the most recent visit made by Stellato was to Gainesville when the Gators hosted Florida State on Dec. 1.

For months, the belief has been that Stellato could end his recruitment at any time, but matters have been complicated a bit following his mid-November visit to Clemson. The Tigers have made a major push, and though there’s been a little upheaval there because wide receivers coach Jeff Scott has decided to take the top job at South Florida, the impact there appears to be minimal.

There’s also another group of Tigers looming, and Stellato has regularly suggested he’d prefer to make a visit to LSU before any decision is made.