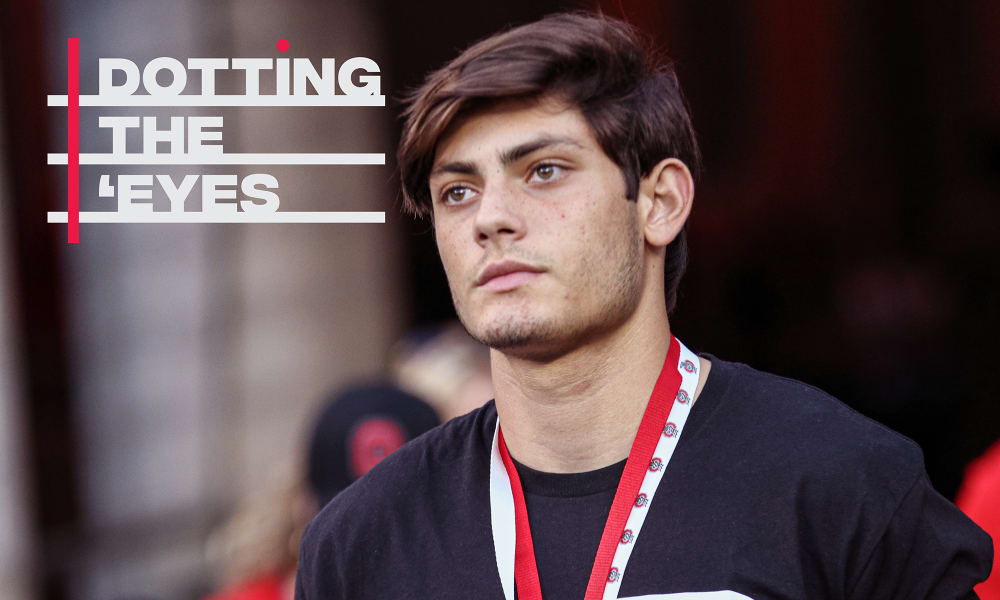 Stay in touch or be left out because Ohio State recruiting is a 24-hour, seven-day-per-week obsession. What’s the latest news as the Buckeyes build for the future? Get that and more Sunday through Thursday on Lettermen Row. Monday’s notebook has an update on Florida receiver Troy Stellato and top 2021 offensive line priority J.C. Latham.

One of the much-anticipated remaining visits for Cardinal Gibbon (Fort Lauderdale) 2021 wide receiver Troy Stellato has come and gone.

Stellato, still ranked as a 3-star prospect despite being a top priority target for Ohio State, Clemson, LSU, Alabama and others, was in Clemson for the game against Wake Forest. He and watched as Dabo Swinney’s program dismantled the Demon Deacons as 11 different pass-catchers reeled in tosses from Trevor Lawrence and backup quarterback Chase Brice.

“It was a good time,” Stellato told Lettermen Row. “I liked it.”

Don’t confuse the understated nature of his comment for a lukewarm vibe or anything between Stellato and the Tigers. He’s a savvy young man and knows what school Lettermen Row writes about, so it’s feasible that comment is intentionally muted a bit. Clemson analysts who cover the recruiting beat have reported very positive things about the Stellato visit from their point of view, including one writer who suggested that Clemson may now be the “team to beat” for the 6-foot, 175-pound wideout.

After speaking to people around the Ohio State program in the last 24 hours, I will concede that there’s been an underlying concern about how Clemson could play spoiler in the recruitment of Stellato. LSU also has been mentioned as another program making a real push, but there’s been no seismic shift in the confidence level following the visit to Clemson to this point — and there’ve been no crystal ball predictions in its direction either.

Stellato has hinted that a decision is possible in the near future, and the momentum coming out of this most recent trip to Clemson was one of the key markers about what to expect moving forward. As of now, I still believe Ohio State is the team to beat.

In Sunday’s edition of Dotting the ‘Eyes we talked a little bit about IMG Academy (Bradenton, Fla.) 4-star offensive line prospect J.C. Latham, who recently released his top-10 schools and included Ohio State in that list.

On Monday, the 6-foot-6, 285-pound lineman — who began playing along up front just this season — announced his next college visit. He’ll be heading to Columbus for the big game against Penn State this weekend.

Latham, who is originally from Wisconsin, last visited Ohio State in April. That trip saw him spend most of his time with 5-star defensive end prospect and Buckeyes commitment Jack Sawyer. Look for Sawyer to be close to Latham again this weekend despite the knee surgery he underwent last Wednesday.

The Fresh Prince 👑 of St. Joes.

McCord is the first player in PCL history to win back-to-back MVP awards prior to his senior season. pic.twitter.com/GS3PVIsUOV

McCord was named league MVP for the second time and certainly has good odds to make it a trifecta next season. That’s not his focus right now, though he’s appreciative of the recognition.

“I don’t really care about personal awards right now,” McCord told Lettermen Row. “I’m trying to win a state title. But it’s a huge honor to be named MVP in back-to-back years, especially in the Philadelphia Catholic League. There’s a lot of other players that are deserving of the award, and to be named MVP by the other coaches, it does mean a lot.”

Stephens was offered by Ohio State back in May. But to this point, he hasn’t made his way to Columbus for a visit. The country’s No. 11-ranked athlete has the potential to play either side of the ball and was offered by Buckeyes assistant Kevin Wilson, who remains in contact with him. It’s Wilson who handles the majority of the recruiting in the North Carolina area for Ohio State.