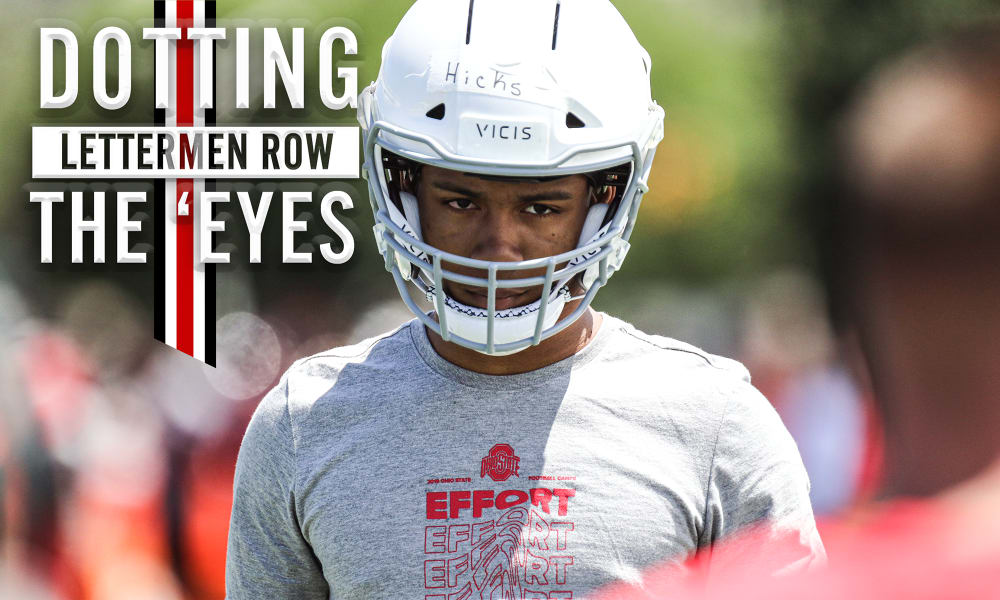 Dayton standout CJ Hicks is one of the country's top-ranked 2022 prospects in the initial rankings. (Birm/Lettermen Row)

Stay in touch or be left out because Ohio State recruiting is a 24-hour, seven-day-per-week obsession. What’s the latest news as the Buckeyes build for the future? Get that and more Sunday through Thursday on Lettermen Row. Today’s notebook focuses on a handful of 2022 prospects who are hoping to start building a relationship with the Buckeyes.

Dayton standout C.J. Hicks was a buzz-worthy performer at a pair of Ohio State one-day camps in June, instantly making himself a name to know in 2022.

Those performances have opened the door for the Archbishop Alter prospect, Ohio’s top-ranked player in the just-released top-100 list in that class, to remain in contact with the Ohio State football staff.

“I heard from them a week after camp and a couple of days ago,” Hicks, 6-foot-4 and 210-pounds, told Lettermen Row. “Their message has been simple. They liked what they saw at the camp, they liked my 7-on-7 stuff and they said they need more film. But I’m the type of guy they want on their roster playing on Saturdays.

“I’m just going into my sophomore year, so hearing that is amazing.”

Hicks has early offers from 15 schools and an offer from Ohio State would be a bit of a game-changer for him. He plans to visit the Buckeyes this fall for a game or two.

“I think I am going to be at the Michigan State game,” he said. “I’m going to visit Cincinnati, West Virginia, Ohio State and Purdue sometime this fall.”

That busy schedule is what life as a top national prospect is all about, and Hicks is grateful to see his name on the early list of top players. The first release of 2022 rankings has him as the No. 24-ranked sophomore-t0-be in America.

While C.J. Hicks is trying to prove he’s the best player in the Class of 2022, Shemar Stewart, a 6-foot-6, 235-pound defensive end at Monsignor Pace (Opa Locka, Fla.) is readying for his first chance to prove he deserves the top spot. That’s where the folks at 247Sports.com have him in their first rankings.

“It’s just the grace of God,” Stewart told Lettermen Row. “It’s an honor that I could be in this position.”

Florida, Georgia, Nebraska, Oregon, Penn State and a dozen others have already offered Stewart, but he has not yet heard at all from Ohio State. He’s hoping that changes.

“I actually like the program that they have over there,” Stewart said. “I would like to hear from them. I love the tradition, and from the games that I have watched, the fan base is incredible. Plus, the reputation of the Buckeyes is that whenever they are down here it’s always going to be a competition and I love competing.”

Though he’s just a sophomore, Stewart is beginning to think about his future. He’s not hellbent on staying in the south for college and will go where the fit is best.

“I know that I want what is best for me,” he said. “The idea of leaving Florida appeals to me. I don’t really have a particular reason, but I know I want to be where I am able to win.”

The fifth-ranked prospect in Texas and the No. 10-ranked receiver in the Class of 2022 is Lewisville star Armani Winfield.

A 6-foot-2, 180-pound receiver, Winfield has 20 offers including Alabama, Oklahoma, Texas and Florida, making him one of the country’s most-offered rising-sophomores.

“It all happened so fast, all I can say is that I’m blessed,” Winfield told Lettermen Row. “I feel like it’s kind of like school when one popular guy likes a pretty girl then all the other guys do, too.”

There’s been no Buckeyes offer or contact yet. But Winfield called Ohio State a place that qualifies as one of his “dream schools” — and no, he’s not related to Buckeyes legend Antoine.

“Growing up, Ohio State was always my dream school,” he said. “It was because of Braxton Miller. Now that I’m a recruit though, I think they run a great offense and put all their athletes in a good position to be successful on the field.”

What does Winfield says will decide his college future?

“It really is just about how I vibe with the coaches,” he said. “Going away from home is a real consideration.”

Completing our Sunday run through some of the country’s best soon-to-be sophomores, we turn back to the defensive line and Chesire (Conn.) Academy where Wilfredo Aybar, the country’s fourth-ranked prospect in 2022 and top-ranked weakside defensive end prospect suits up.

At 6-foot-4 and 220-pounds, Aybar has added scholarships from six schools early and none are recruiting him harder than the Michigan Wolverines at the moment.

“I currently have six offers and multiple other schools such as Duke, Pitt, Virginia Tech and Ohio State have come down and told my coach they wanted me to visit,” Aybar told Lettermen Row. “But I haven’t had the chance. Michigan seems to have shown the most interest so far.

“Ohio State is definitely a school I’d like to visit.”

Like most sophomore prospects in the country, Aybar has not yet had much contact with Ohio State directly. But he’s aware of what makes the Buckeyes famous, especially Larry Johnson.

“I like how they are always a top school in the country,” Aybar said. “They have produced great defensive linemen recently, guys like Nick and Joey Bosa. I like that.”

Who should Buckeyes recruit to fill void at running back?
Jakob James driven by family legacy, underdog status