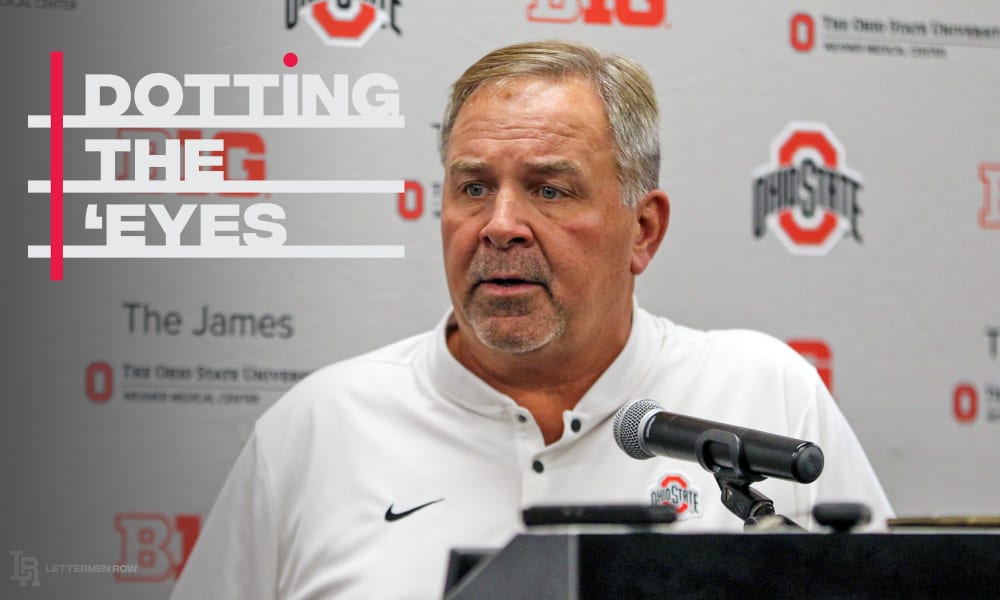 Stay in touch or be left out because Ohio State recruiting is a 24-hour, seven-day-per-week obsession. What’s the latest news as the Buckeyes build for the future? Get that and more Sunday through Thursday on Lettermen Row. The midweek notebook addresses the possibility of adding another tight end in the Class of 2020 and explains why missing the cut for the country’s top-ranked 2021 center isn’t a big deal.

Cam Large off the board, Ohio State looks done at tight end

On Tuesday, we broke down the positions of need that remain in the Class of 2020 for Ohio State. That list did not include the tight end position, but that doesn’t mean the Buckeyes wouldn’t still consider an addition there if the right guy came along.

That said, the list of options is getting shorter by the day. Tuesday evening, Massachusetts 3-star prospect Cam Large, who took an official visit to Ohio State in June, became the latest guy to drop off that limited list when he committed to Wisconsin.

To be perfectly frank, I don’t believe that Large has been a real target for Ohio State since the commitment of Cincinnati Elder tight end Joe Royer in early July. For months the Buckeyes been keen on the idea of taking two tight ends in this class, but numbers tightened and the emergence of tight ends on the current roster mitigated that need a bit.

So, are there still players worth considering at the position? Sure, if 5-star talents like Darnell Washington or Arik Gilbert felt like giving Ohio State a real look, but that doesn’t seem to be happening either.

I wrote about it in June and I’ll leave this here again, despite his commitment to Iowa: The best second option for Ohio State at tight end in 2020 lives right down the street and his name is Luke Lachey. There have been continuing conversations with the Buckeyes and Lachey, but at this point, there’s no reason to expect anything will change in his recruitment. However, recruiting often changes in the blink of an eye, and if there becomes an increased need for another tight end in 2020, Lachey is the guy that makes the most sense.

If not, expect the Buckeyes to recruit two at the position in the 2021 cycle.

The Buckeyes did not make the cut for the country’s top center in the Class of 2021 when Damascus (Md.) 4-star prospect Ryan Linthicum released a top-three schools list that included Clemson, Michigan and Virginia Tech.

A teammate of Clemson 2020 commit Bryan Bresee, Linthicum visited the Buckeyes this summer and had a lot of good things to say about the program. He left that trip saying that the Buckeyes were “definitely in his top group,” but as he narrowed it down even further, Ohio State is on the outside looking in.

It’s never good to miss on a top prospect. But if there’s one offensive line position that the Buckeyes seem to be set, it’s at center — where the 6-foot-4, 290-pound Linthicum lines up. Josh Myers looks ready to be the man in the middle for Ohio State over the next two seasons, and former top-ranked centers Matt Jones (2018) and Harry Miller (2019) are both on the roster right now with current 2020 top-ranked center Luke Wypler committed and set to show up next summer.

The Buckeyes have recruited the Nashville area hard over the last few years, and on Tuesday night they offered another top target from Music City.

Blessed to receive an offer from The Ohio State University 🅾️🌰#GoBucks 🤙🏽 pic.twitter.com/hLHiI7PKKC

That is Ensworth (Nashville) High School cornerback Andre Turrentine, a 4-star prospect with early offers from the likes of Alabama, Georgia and others. Turrentine is a 6-foot, 175-pound player who checks in as the country’s 14th-ranked cornerback prospect and the No. 5-overall player in Tennessee in the junior class. He was offered by Ohio State running backs coach Tony Alford, who recruits the area for the program.

“It was my first time talking to him,” Turrentine said. “It’s very big for me knowing I have them as an option. I definitely need to get up there.”