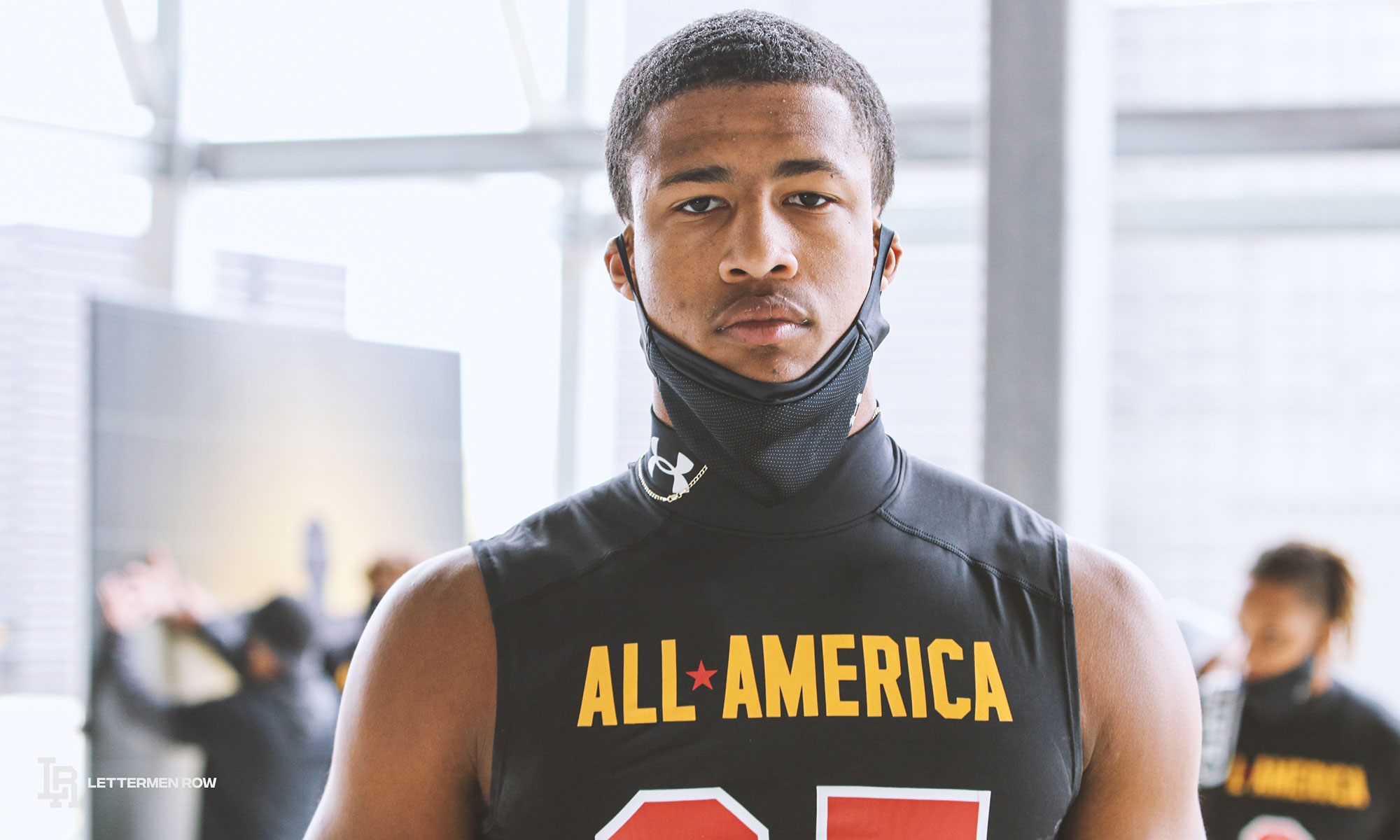 Sonny Styles worked with the defensive backs and was physical, fast and eager to learn. (Birm/Lettermen Row)

COLUMBUS — The weather wasn’t great, but that didn’t stop a loaded field of Ohio State targets, commits and other recruits from showing up at the Under Armour Camp Series on Sunday morning.

Coming into the day, Lettermen Row had a number of questions it was trying to answer. Some got addressed, but new ones popped up too. Others simply couldn’t be tackled yet.

Key prospects Aamil Wagner and Luke Montgomery didn’t make the camp after planning to appear. Dasan McCullough and Kaden Saunders didn’t work out because of injuries.

These camp settings rarely provide all the answers, but it’s a great place to get the pulse of recruiting now — and to learn about players who could be catching the attention of the Buckeyes in the future.

Here’s what we learned from the Under Armour Camp Series in Columbus.

As mentioned, the hard work put in by C.J. Hicks and Gabe Powers over the last year was obvious. These two Ohio State commits have changed their bodies considerably over the last year, and Hicks was once again as smooth and explosive as any player in attendance. Powers was limited with a minor leg injury and only did drills, no competition. He really has the look of a Buckeyes linebacker at 230 pounds now.

One thing that was interesting to watch was how comfortable the trio was together. For a couple of kids who just met each other in person for the first time, there was a real camaraderie that was obvious to see. There’s always talk about how close they’ve become in group messages, and that wasn’t just fluff. Powers and Tegra Tshabola are two of the more reserved kids in the entire country, but being around their peers had them opening up and enjoying themselves.

Coaches in the crowd who brought other campers to town were asking about Hicks: Who is that? He just looks like an Ohio State type of athlete. He could be very, very special if he keeps working the way he has been. 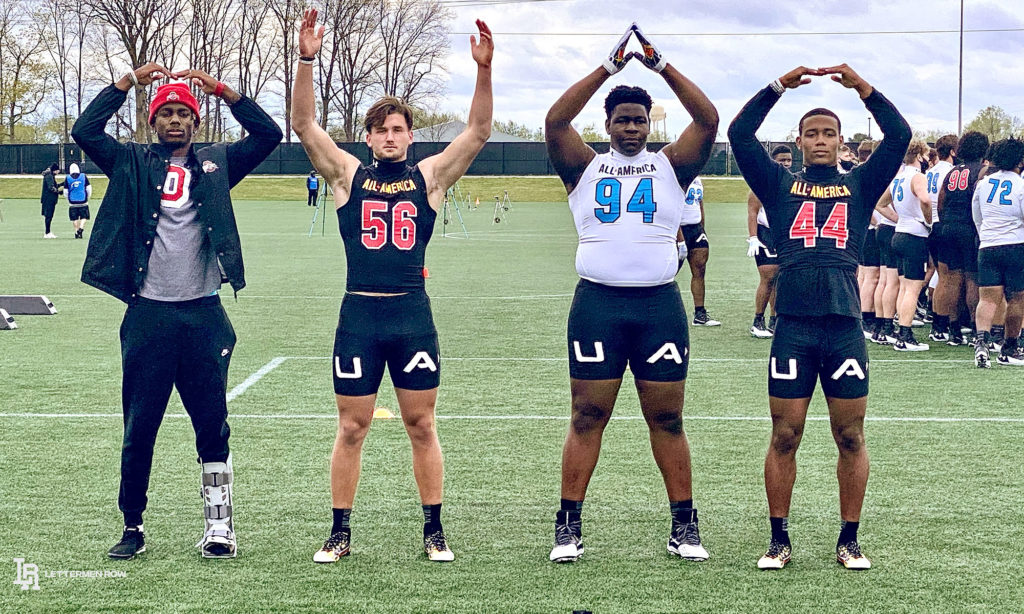 The bonds being formed in this class are very real, and it was on display all afternoon — especially when Jyaire Brown arrived. The first Ohio State 2022 commitment lost his father this past week and came to camp to work out. His future teammates being there played a big role in his decision.

Can Class of 2023 establish chemistry in person before key visits?

The chemistry of the 2022 class is clear, and it is building in the Class of 2023 as well even without potential Pied Piper Luke Montgomery not in attendance. Sonny Styles, Brenan Vernon and Josh Padilla were all on hand and earned invitations to the Under Armour Future 50, the brand’s big event for rising prospects.

The real boost for the group there was the chance to get familiar with guys like Iowa’s Kadyn Proctor and Massachusetts star Samsun Okunlola, who may have won the eye test more than any player in attendance. 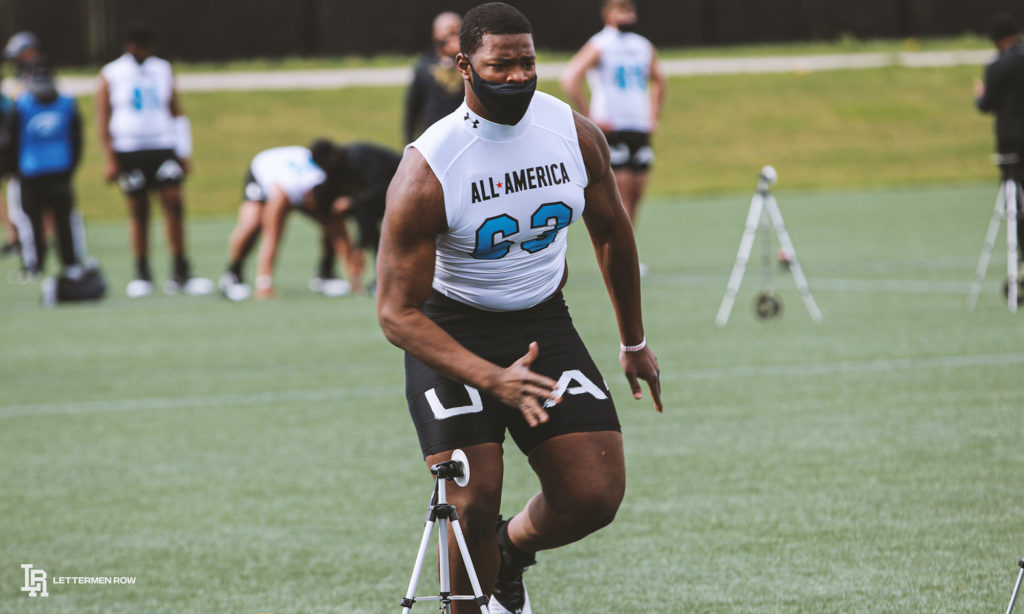 Samsun Okunlola caught the attention of everyone at the Under Armour Camp Series in Columbus. (BIrm/Lettermen Row)

Styles told Lettermen Row that he and Montgomery have been making plans to sync up some college visits this June, and there’s a lot of contact amongst this group already. That’s a good thing for Ohio State as it hopes to build the base of its 2023 class inside of Ohio’s borders.

This is one area where things didn’t really get any clarity.

Delian Bradley was his normal, solid self. He is a steady, consistent player who has remained in conversation with the Buckeyes. There’s a chance for him to earn a spot in Columbus, and he’s hoping to work in a private work out in front of Kerry Coombs and Matt Barnes some time this summer. Alex Afari rolled an ankle early and missed 1-on-1 drills. He looks great, though, and I hope to see him compete in another event down the line.

Michigan standout Jaden Mangham worked out at wide receiver rather than defensive back, so the chance to see what he could do was lost as well.

A different Michigan prospect popped up on my personal radar, however. That was Kentucky commitment Jeremiah Caldwell from Belleville High School. He played smart and physical at 6-foot-3 and almost 180 pounds. The Buckeyes could do worse than to try and take a good look at him when things open up. There’s a lot of potential there, and his position coach loved his game.

Though 2023 quarterback Dante Moore was probably the standard-bearer at the event, it was pretty impressive — and almost unbelievable — that an eighth-grade prospect was able to stand his own at this event. But Bryce Underwood did that. It’s easy to see why folks in Southeast Michigan are excited about his future. I don’t know how big he’s going to get, but he’s just under 6-foot-2 now and wasn’t awkward or skinny. His delivery will get better, his technique will get better — but he’s starting from one heck of a good place. File the name away for the future. 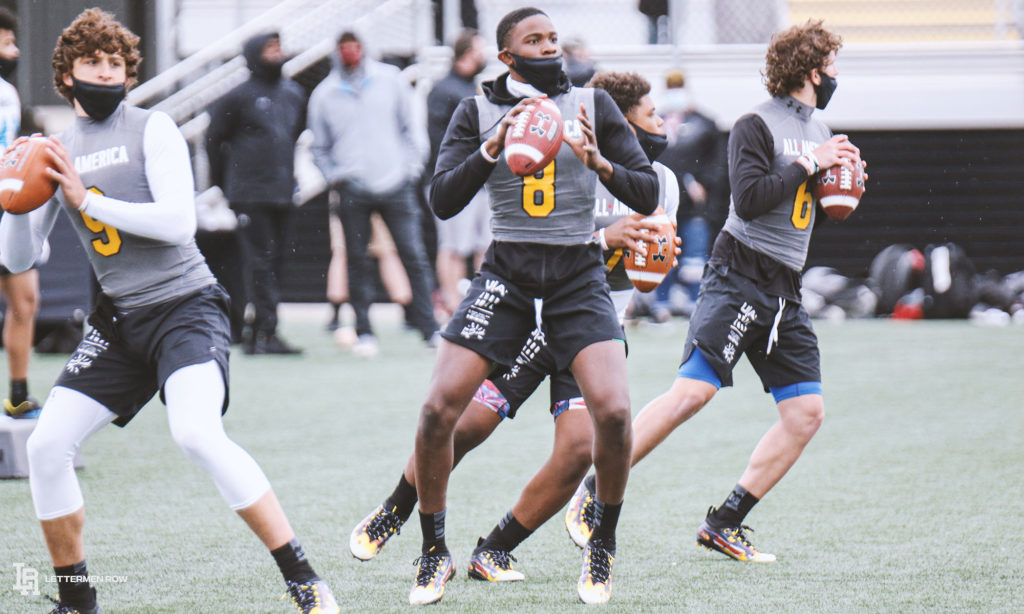 Bryce Underwood doesn’t look like a 2025 prospect at this point. (Birm/Lettermen Row)

As for Moore, it was two years ago I saw him last and he has fixed what used to be a somewhat wonky release. He threw the ball well and without much effort. Physically he doesn’t quite look like what most folks think a 5-star quarterback looks like — yet — but he’s also just a high school sophomore.

Here are just a couple quick-hitter thoughts to wrap this up:

Five Buckeyes recruiting questions at Under Armour Columbus
Sonny Styles is future star, no matter what position he plays