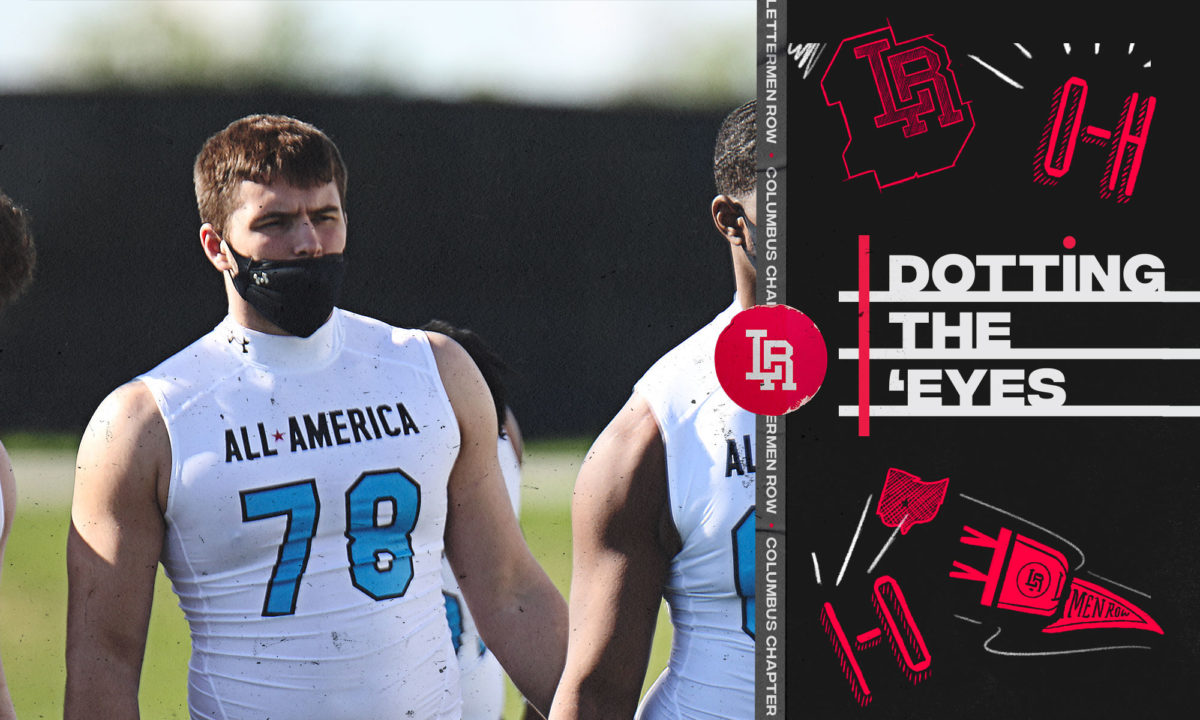 Carson Hinzman is one of three offensive linemen from Wisconsin set to visit Ohio State this summer. (Birm/Lettermen Row)

Stay in touch or be left out because Ohio State recruiting is a 24-hour, seven-day-per-week obsession. What’s the latest news as the Buckeyes build for the future? Get that and more Sunday through Thursday on Lettermen Row. Today’s notebook talks about a couple of interesting 2022 offensive linemen plus a pair of 2023 quarterbacks set to visit Ohio State next month.

The Buckeyes will host a number of talented prospects next month, and June will be especially important for Greg Studrawa. The Ohio State offensive line coach has only commitment to this point in the 2022 recruiting class. The four-week stretch of open recruiting will allow the first real opportunity to evaluate players that the Buckeyes have spent the last year-plus building relationships with.

One of those players is Carson Hinzman from St. Croix Central (Hammond, Wisc.) High School. He’ll make an official visit to Ohio State on June 11. His contact with the Buckeyes has been ongoing since last summer.

The 6-foot-4, 280-pound Hinzman doesn’t have an offer from Ohio State yet. That could change when his visit occurs.

“He said there is definitely a possibility,” Hinzman said. “He’d like to meet in person first, which I completely understand.”

With 20 offers and visits set to Ohio State, Notre Dame, Iowa and Wisconsin, June is going to be about learning more about the places he’s visiting. The in-person contact will provide a look at the things virtual meetings can’t show.

“To me personally, culture is the most important,” Hinzman said. “I think a great outlet for learning that will be the players there.”

“He’s phenomenal,” Edge told Lettermen Row. “He’s a person who cares about more than just football. He’s a family man, and I have a tremendous amount of respect for him. If he was older, we’d still have the same relationship, I feel, so I don’t think age has much to do with it.”

It’s that respect for Dennis which has made a trip to Ohio State a top priority for the country’s No. 6-ranked pro-style 2023 quarterback.

“I’ll be there on June 8,” Edge said. “Coach Dennis said he liked the film and wanted to see me in person. He just said they want to see me live, that’s all. He didn’t put any pressure on me about it.”

The 6-foot-2, 190-pound sophomore will also visit Clemson and potentially LSU next June. The Buckeyes and Tigers — the Clemson-flavored ones — are two programs he’s built a solid connection with so far. Though neither have offered, that pair leads the way of the schools that haven’t offered yet, relationship-wise.

“I would say so for schools who haven’t offered,” he said. “I just look at it as a chance to get better. I’m beyond blessed to have these opportunities, but I still have to continue to put in the work.”

The next two weeks will likely determine the outcome of Ryan Baer’s recruitment.

The huge offensive tackle prospect from Eastlake North High School added his biggest offer to date on Tuesday night when Notre Dame offered. The chance to earn an offer from Ohio State is coming soon.

“I’ll be at Ohio State on June 7,” Baer told Lettermen Row. “Ohio State is like a visit and personal workout, it’s not an actual camp date. That’s the only camp-like thing I’m doing. I’m just ready to show people what’s up. I’ve been running every day because I want to be in good condition when I’m down there. I’ve been focusing on technique and footwork.

“After that I have five official visits scheduled: Virginia, Illinois, Kentucky, Tennessee and Michigan State.”

With the offer from the Irish now official, things may change for the 6-foot-7, 330-pound Baer.

“My whole recruiting process could change,” he said. “That would be a blessing, but I feel pretty stressful at the same time. At the end of the day I just have to do my job.”

Clock-in for Baer is June 7. The question now is whether it will lead to an Ohio State offer.

We mentioned in yesterday’s Recruiting Question of the Day that Snellsville (Ga.) High School 2023 quarterback Dylan Longeran will camp at Ohio State in June.

“I’ll be there on June 9,” Longeran told Lettermen Row. “I’ve been talking to Coach Dennis about once a week for the past month. He just wants me to get up there so he can see me throw live.”

Longeran, 6-foot-2 and 215 pounds, is the country’s No. 5-ranked pro-style quarterback. He, like Cameron Edge, will camp at Clemson as well as Ohio State this summer. Georgia, Alabama, North Carolina and LSU are among the other stops he has planned. Longeran has received a lot of attention — and playing a full season in Georgia may play a role as to why.

“A year ago I definitely didn’t think I’d be here,” he said. “I think the extra year of varsity film really helped, because I didn’t split time this year. I missed three games with an injury, but I think I had like 2,500 yards and 25 touchdowns and eight rushing touchdowns as well.”

Ohio State visit set for J.T. Tuimoloau, breaking down ideal 2023 quarterback, 2022 'In or Out'
Watch this video on YouTube.