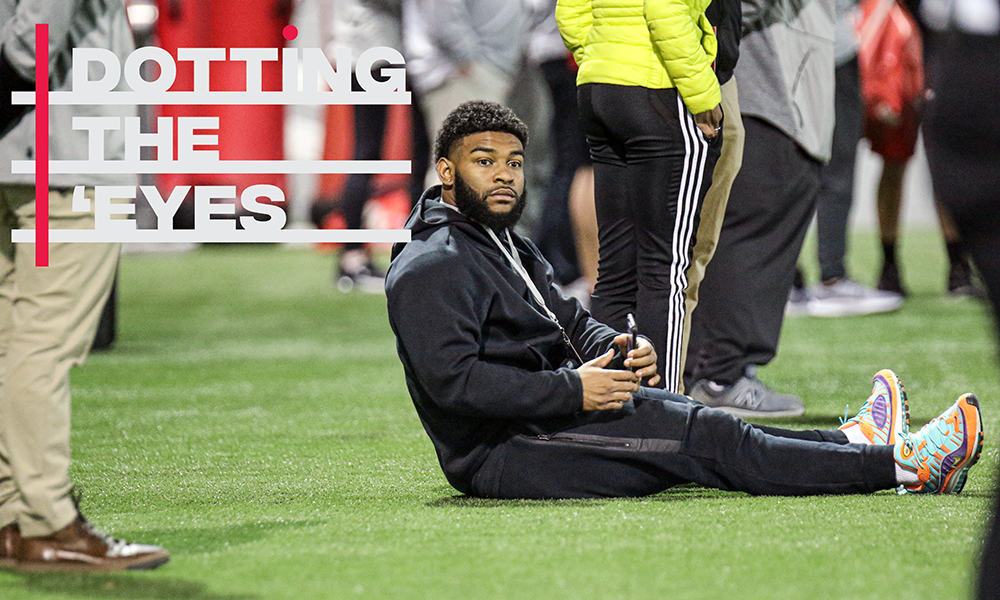 Stay in touch or be left out because Ohio State recruiting is a 24-hour, seven-day-per-week obsession. What’s the latest news as the Buckeyes build for the future? Get that and more Sunday through Thursday on Lettermen Row. Monday’s notebook looks at the loaded Top 10 list of a top offensive line target, introduces a young defensive back to watch and has the latest on a few key visitors at Ohio State for the Buckeyes first spring practice of 2020.

Spring football is in full effect at Ohio State thanks to Monday morning’s first practice. And with the return of Buckeyes football means the return of recruiting visitors. There were not many players in attendance for the morning practice in Columbus, but three 2020 Ohio State signees were in attendance as running back Miyan Williams and offensive linemen Jakob James and Grant Toutant made their way to the Woody Hayes Athletic Center to watch their future teammates.

Toutant, fully recovered and cleared for action following a procedure on his shoulder last November, was back in town for the second time in three days, so he’s clearly diving into the opportunity to learn the Buckeyes offense and terminology despite not being an early enrollee.

As for non-committed players, Avondale (Mich.) 3-star running back David Holloman was in attendance for the Buckeyes first practice, being escorted around by Ohio State director of player personnel Mark Pantoni. Holloman is a 5-foot-11, 195-pound tailback who has 16 offers from around the country, including Nebraska, Maryland, Indiana, Iowa State and others. He last visited the Buckeyes in November for the Penn State game and then was at Michigan a week later as Ohio State toppled the Wolverines.

“I love going there to visit and feel really good about Ohio State,” Holloman told Lettermen Row following the visit for the Penn State game. “[Ohio State running backs] Coach [Tony Alford] really likes me so every time I come me, my family really appreciates the hospitality.”

Keep an eye on Holloman as the Buckeyes continue to look for a pair of running backs in the Class of 2021.

Another Michigan star, Clarkston 4-star offensive lineman Rocco Spindler, is set to visit Ohio State sometime this spring. He’s hoping for an early May official visit with the Buckeyes, and on Monday morning he released a narrowed down list of schools.

The country’s No. 2-ranked interior lineman, Spindler has been to Ohio State twice and has a consistent relationship with Ryan Day and Greg Studrawa. It’s those bonds that have him still seriously considering the Buckeyes.

“I love their coaching staff,” Spindler told Lettermen Row on Monday. “I have a strong bond with Coach Day and Coach Stud.

Michigan and Notre Dame are considered the favorites to land the 6-foot-5, 300-pound Spindler, but Ohio State remains a darkhorse contender to pull off the upset. The key will be getting him on campus for his official visit. Despite the fact that the Buckeyes have the final planned visit in his mind, there’s no chance he’ll commit anywhere before he returns.

“There’s a zero-percent chance,” he said, before clarifying that his visit date to Ohio State isn’t set, though he’s aiming for the first of May. “The coaches are still talking it over and see if they can make the date work.”

Ohio State has gone to the St. Thomas Aquinas (Fort Lauderdale) well a number of times in the last decade-plus, and the Buckeyes are once again recruiting the prestigious program aggressively. One of the Raiders top young prospects is 2021 cornerback Ja’Den McBurrows, a currently unranked defensive back who has recently reported a number of big-time offers, including Alabama, Florida State, Miami, Georgia and Michigan.

The Buckeyes have not offered McBurrows, 5-foot-10 and 170-pounds. But he’ll be heading north to check out the Ohio State program at the end of March.

“I’m getting to know the coaches at Ohio State very well,” McBurrows told Lettermen Row. “When I heard about the prospects that came from Saint Thomas that went to Ohio State, I started to look into [the Buckeyes]. Then when I found out the defensive backs they put into the NFL, I was loving them from the jump. I’m visiting on March 27.”

McBurrows will be heading to Ohio with his family and has just a few things in mind for his visit to Columbus.