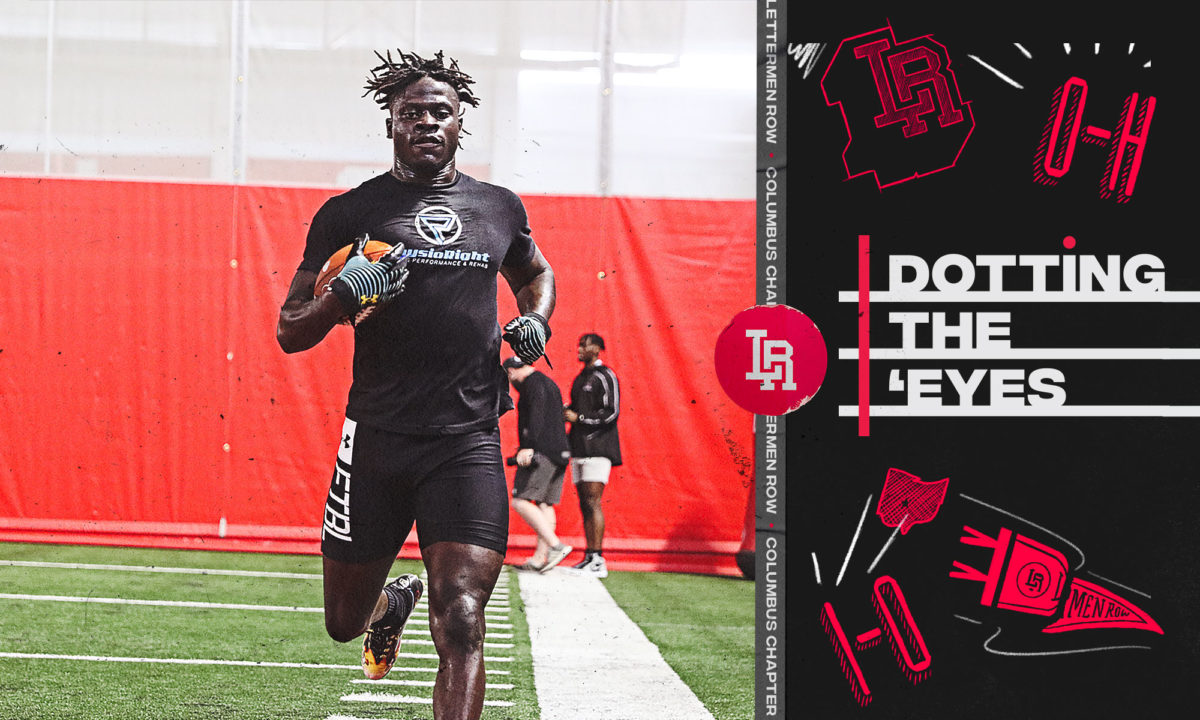 Richard Young is the country's best 2023 running back and looks like a can't miss type prospect. (Birm/Lettermen Row)

Stay in touch or be left out because Ohio State recruiting is a 24-hour, seven-day-per-week obsession. What’s the latest news as the Buckeyes build for the future? Get that and more Sunday through Thursday on Lettermen Row. Today’s notebook has key updates from Wednesday’s one-day recruiting camp at Ohio State.

To be very clear: the country’s top-ranked running back didn’t have to work out at Ohio State on Wednesday. He wanted to work out.

And that’s one of the reasons why Richard Young, an absolute can’t-miss-prospect in the Class of 2023, is so special. The 6-foot-1, 210-pound Lehigh Senior (Lehigh Acres, Fla.) 5-star tailback was put through the paces by Buckeyes running backs coach Tony Alford and showed the strength, speed and agility that backs up his lofty national ranking.

When the workout was done, Young strolled around the Ohio State camp, checking out other young players as they did their drillwork and spending time with coaches from Alford to Greg Studrawa to Ryan Day. Young arrived late Tuesday night and spent some time with fellow 5-star Treyaun Webb and isn’t slated to leave Columbus until late Thursday afternoon.

It’s very early in this battle but make no mistake: Ohio State is very, very in it for Richard Young.

Dylan Lonergan, a 2023 prospect out of Brookwood (Snellville, Ga.) High School, went on an unofficial visit after throwing for Corey Dennis and Ryan Day. He walked out with an offer in hand. A 6-foot-1, 195-pound quarterback, he holds offers from the likes of Alabama, Auburn, Oregon and Georgia. Also a big-time baseball prospect, he’s a 4-star recruit and ranked as the fourth-best quarterback in his class.

“I liked the way Coach Dennis and Ryan Day coached,” Lonergan told Lettermen Row. “They were really active and doing a lot of the stuff, not just saying what to do.”

The baseball component is going to be a key for Lonergan, and he intends to play both sports in college and wants to return to Ohio State for a game in the fall.

“It’s a great program,” he said. “And my plan is to definitely play both in college no matter where I end up.”

The Buckeyes offered two 2023 quarterbacks after their camps last week in Eli Holstein and Nico Iamaleava. With Quinn Ewers coming in as the No. 1 in the 2022 class, Ohio State might not land the highest-rated prospect in the class after. The son of former Penn State quarterback Dan Lonergan impressed Wednesday with a strong arm and looked solid during a scrambling drill.

Ohio State also extended its first offer to a quarterback in the 2024 class. Adrian Posse looked like the best quarterback in the group and it resulted in his seventh offer. Already at 6-foot-4 and 205-pounds, he led his Monsignor Pace team to an appearance in the 4A Florida state playoffs in his freshman year. With plenty of room to still grow into his frame, Posse has a lot to like. Georgia, LSU and Miami are already involved in his recruitment and have offered. 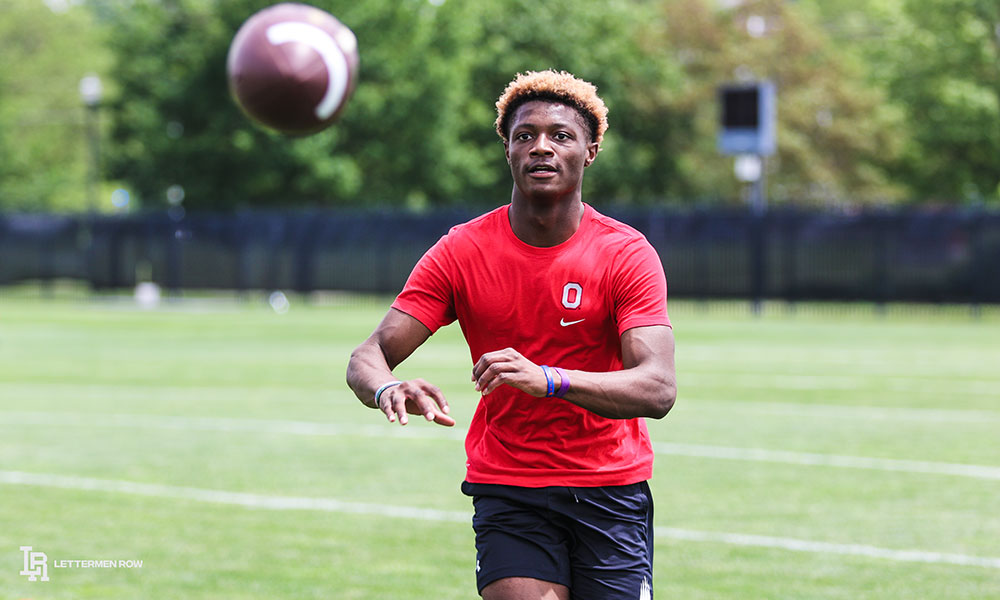 Carnell Tate likely to return to Ohio State for a second June visit?

Though he wasn’t seen around Ohio State on Wednesday, Chicago native and IMG Academy star Carnell Tate spent a little more time with the Buckeyes after working out on Tuesday. The 4-star 2023 prospect was very impressive in his short time working with Brian Hartline, soaking up the lessons being taught and quickly applying them to his game.

“Working out with Coach Hartline was a blessing,” Tate told Lettermen Row. “Being able to improve on my game with the best coach out there is a blessing. Not too many get the chance to be recruited by Hartline and coached by him.”

“The staff stood out to me, all of them,” he said. “They’re family and amazing people. I could ask anyone a question without being uncomfortable, even the current receivers. I was able to talk to them and watch them run routes and get on the jug machine.

The first impression for Carnell Tate and Ohio State was a good one. So good, in fact, he wants to get back very soon with his mother.

The great thing about one-day camps is that it’s a constant learning process. Coaches see the recruiting profiles of highly-ranked players just like everyone else, but until a kid shows up on campus and stands next a staff member, it’s hard to gauge exactly how big someone is. Frames matter as much as current heights and weights, especially when projecting young players.

So when the country’s No. 1-ranked 2023 linebacker Tausili Akana showed up on Tuesday, no one really knew what to expect. At 6-foot-4 and 225-pounds, he’s a big kid obviously. But his frame looked like he could easily carry 25-30 more pounds without losing any athleticism and that’s why he worked out not just with Al Washington but also with Larry Johnson on Tuesday.

On Wednesday morning, after some consideration, that versatility earned the potential 5-star talent an Ohio State offer.

Football is changing and positions are changing. Versatility is the name of the game. Welcome to the future.