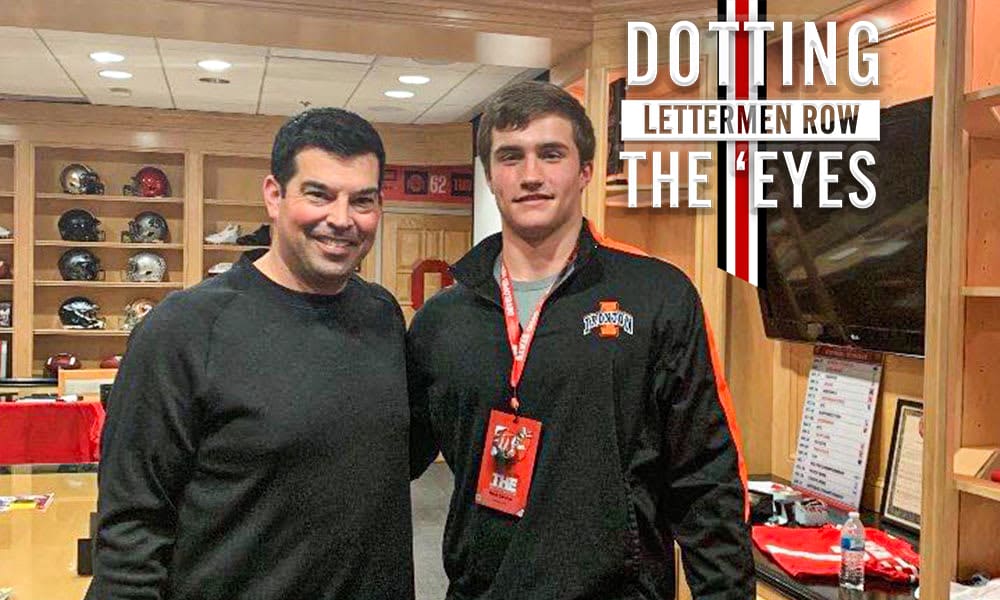 Ohio State target Reid Carrico intended to make a decision before his junior season, but that is no longer the case. (Reid Carrico/Twitter)

Stay in touch or be left out because Ohio State recruiting is a 24-hour, seven-day-per-week obsession. What’s the latest news as the Buckeyes build for the future? Get that and more Sunday through Thursday on Lettermen Row. Today’s notebook has more on linebacker Reid Carrico and the top options at running back for the Buckeyes moving forward.

There was supposed to be a decision coming soon from Ohio’s top-ranked 2021 linebacker, but that is no longer the case.

Reid Carrico, the country’s No. 1-ranked inside linebacker prospect according to 247Sports, has decided to delay his decision rather than announcing a commitment prior to the start of his junior season.

“The season has snuck up on me pretty freaking quick,” Carrico told Lettermen Row. “So, no. But my plan is to decide some time during my junior year.”

Whether or not that’s good news or bad news for Ohio State is open for interpretation. The Buckeyes would certainly like to wrap up Carrico’s recruitment, but the program also knows he’s just beginning his third year of high school. To this point, no school has really had a chance to develop a real relationship with the 6-foot-3, 218-pound linebacker.

That changes on Sept. 1, a date the linebacker is ready for.

“I know things are going to get crazy,” Carrico said. “But you can make it as crazy or as calm as you want, I think. I’m just going to just focus mainly on winning a state title, and I’m pretty confident that I will keep my priorities straight.”

Carrico spent last weekend at Clemson and Tennessee and said he “enjoyed his time” with the two programs. There were “different vibes” there, though, not surprising given the differences in those locales compared to Columbus. He does not have any plan to return to Ohio State at this time, and he’s still deciding which other schools are likely to get game-day visits this fall.

For much of the last month, it seemed a foregone conclusion that Deerfield Beach (Fla.) running back Jaylan Knighton was going to commit to Ohio State when he announced his decision, which is scheduled to be revealed on Tuesday night. But as mentioned on Monday, that is no longer the case.

After a weekend visit to Florida State, expect the country’s third-ranked all-purpose running back to pick the Seminoles, much to the chagrin of Tony Alford and the Buckeyes.

But as with many players from Florida, don’t be surprised if Knighton’s name pops back up on the recruiting board at some point down the road. Whether or not that means anything for Ohio State is undecided. But the Buckeyes and the Miami Hurricanes are likely to stay involved here as the season unfolds.

Is E.J. Smith the next Ohio State option at running back?

If everything goes as it seems like it will, Ohio State will enter its fall football camp without a 2020 running back committed after feeling for the last month like it would have two.

So where do the Buckeyes turn from here? That’s the biggest question on the recruiting trail for the program right now, and I don’t think that there’s an absolute answer. I’m also not sure there can be until it’s decided whether or not the recent course of events has derailed the plan to sign a pair in 2020 or if the focus now becomes landing just one and counting on a two-for-one in 2021.

Whether it’s one or two guys who end up in the class, there’s going to be some serious shifting of the Buckeyes recruiting board in the near future. And they’re likely to turn to a handful of young players they’ve already been recruiting for a while. The first of those players is E.J. Smith, the son of the NFL’s all-time leading rusher Emmitt Smith.

The contact between the Ohio State staff and Smith has never waned, and he’s not expected to make a decision until after his senior season. So, there’s plenty of time for the Buckeyes to sort out their plans and to show Smith that he’s now the guy for them. He’s more similar to Knighton than Bijan Robinson, though, so that’s where the real question comes in: Is there a bell-cow running back out there for Ohio State in 2020?

If there is, the Buckeyes may have to hope he falls into their lap in a way similar to how Marcus Crowley did a year ago. If I was in charge of the recruiting efforts, I’d personally kick the tires on another Florida standout, Clearwater’s Keyvone Lee.

Lee has the feet and quick-cut ability teams want in a big, powerful, every-down back. Right now it appears he may be leaning towards Florida State, while Penn State hopes the Seminoles will keep turning their attention elsewhere. Lee has been to Tallahassee four times in the last three months, and Penn State is in a very good position to land fellow Floridian Caziah Holmes and is also a top choice for New Jersey’s Jalen Berger. There’s some room for the Buckeyes to highlight their need over others.

There are going to be other names that pop up, but much of what happens from here at running back is going to rely on whether or not Ohio State is still committed to signing two in 2020. I tend to think they will stick with that plan.

There have been a handful of Ohio State recruits who have recently decided to commit elsewhere. Here’s a brief sampling of those names:

The Buckeyes will see another player that had been a top target until recently commit elsewhere on Tuesday night: West Bloomfield (Mich.) 4-star defensive back Makari Paige.

Michigan has become the favorite here, and there are some folks unhappy that this one has gotten away from Ohio State primarily because it was in a very favorable position until some concerns about the supposed 25-man hard cap on the signing class deterred them from continuing to recruit him aggressively.

There is a potential for some collateral damage to that decision as well. Paige is the teammate of Ohio State’s top running back target in the Class of 2021, Donovan Edwards, and that’s a battle that may come down to the Buckeyes and Wolverines whenever the third-ranked 2021 running back makes his college decision.