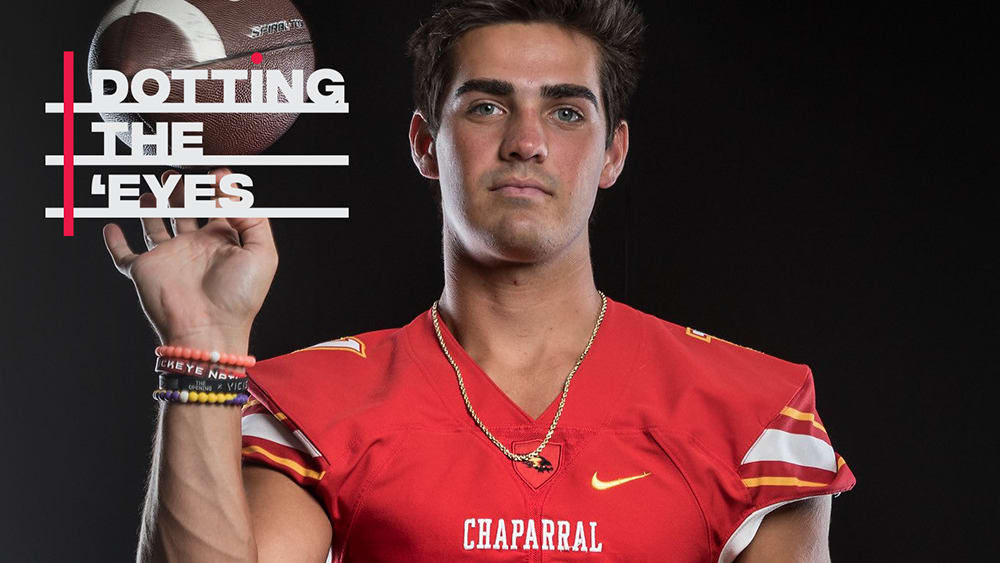 Stay in touch or be left out because Ohio State recruiting is a 24-hour, seven-day-per-week obsession. What’s the latest news as the Buckeyes build for the future? Get that and more Sunday through Thursday on Lettermen Row. Sunday’s notebook is all about the quarterback position and what is going on for the Buckeyes.

Jack Miller eager to get back on field, draws attention off of it

For the third straight week, Ohio State quarterback commitment Jack Miller was sidelined as his Chaparral (Scottsdale, Ariz.) team played on. Miller has played just two of five games this season for the Firebirds after missing half of his junior season following a knee injury suffered last October.

Injuries have been a part of the Miller story for the last few years, and it’s one of the reasons for increased speculation about if and when Ohio State will commit to pursuing another quarterback in the Class of 2020.

Miller isn’t immune to the conversation. For months, he has acknowledged the likely outcome involves a second quarterback being added to complement him in this class. It’s not a matter of it being a knock on Miller’s talent or even his ability to stay healthy — it’s simply about numbers.

The Buckeyes do not have enough quarterbacks on scholarship on their roster. His father, also named Jack, addressed that in a series of tweets on Thursday afternoon.

Lastly, all the talk about another 2020, it was inevitable with transfers, and situation. Jack will compete with all comers, and we are kept informed of prospects, doesn’t change anything…the trust in the process and his coaches. He is ready to compete.

That comment is, to use the elder Miller’s term, aligned with what his son has told Lettermen Row privately and publicly for much of the last year.

“I don’t really care who they bring in,” Miller said in April. “I will compete with anybody.”

That’s what Miller has been telling the people in Columbus, too, according to sources. So the message has been consistent across the board. There’s no legitimate reason for the Buckeyes to worry that he’s considering reneging on his commitment or looking elsewhere, though other schools are certainly trying to expose any potential crack in his commitment.

But Miller talks to Ohio State multiple times a week and is on track to enroll in January. Would he prefer to be the only quarterback in his class? Probably, but I think that could be said of any prospect at the position at any school.

The latest round of Miller rumors was precipitated by a 247Sports.com crystal ball prediction that was entered in Ohio State’s favor for California quarterback C.J. Stroud.

The prediction, the only one attached to Stroud’s profile, caused a little rush of attention which culminated in a report from Bill Kurelic of 247Sports that suggested the 4-star quarterback prospect from Rancho Cucamonga High School was hoping to visit the Buckeyes next week for the Michigan State game.

A source on the Ohio State side of things shared a few interesting things with Lettermen Row last week. First, while things can change in just a matter of hours, the Buckeyes have been getting closer to a consensus on a potential offer for Stroud. Whether it be this week or next, some movement could occur soon.

Soon is, of course, subjective.

Beyond that, Lettermen Row was told there’s been no pressure from the Stroud camp at all. There’s no pushing for the offer to happen from that side at all. The impetus for an enhanced timeline actually comes from the Buckeyes side of the aisle as they’re apparently paying attention to quarterback recruiting dominos nationally.

Lastly, the question about a potential visit was broached. There was nothing planned as of last Wednesday, but there’s some hope from both sides that it works out in a way that the 6-foot-3, 195-pound Stroud will be in Columbus this weekend. Stay tuned to that.

The Buckeyes are not willing to put all their eggs into one quarterback basket at this point and have been talking to another 2020 prospect who is worth monitoring.

Jayden de Laura is a 3-star prospect leading the charge at St. Louis (Honolulu) High School, the program that produced quarterbacks Marcus Mariota and Tua Tagovailoa. A 6-foot-1, 200-pounder, de Laura has only four offers right now — but recently has heard from top programs like Ohio State, Georgia and others.

“I would say after our last game and the Bishop Gorman game [interest surged],” de Laura told Lettermen Row. “I showed that I can manage a game and be really accurate and take care of the ball.”

There’s nothing Ohio State asks more from its quarterbacks than to protect the football. Right behind that is the ability to make plays, and de Laura can do that with his feet or with his arm.

This recruitment of de Laura is still in its infancy. But the country’s 31st-ranked pro-style quarterback is excited by the prospect of where it could lead.

“Never in a million years would I have thought I would get contacted by Ohio State,” de Laura said. “I honestly know that I can compete with anyone at any level, but I never knew the attention I’m getting now would happen. I woke up and grabbed my phone and saw that [quarterbacks coach Mike] Yurcich reached out to me and I like freaked out. I replied as fast as I could.

“They said that they’re going to be coming down to come watch me, and hopefully they can get me up there on a visit after.”