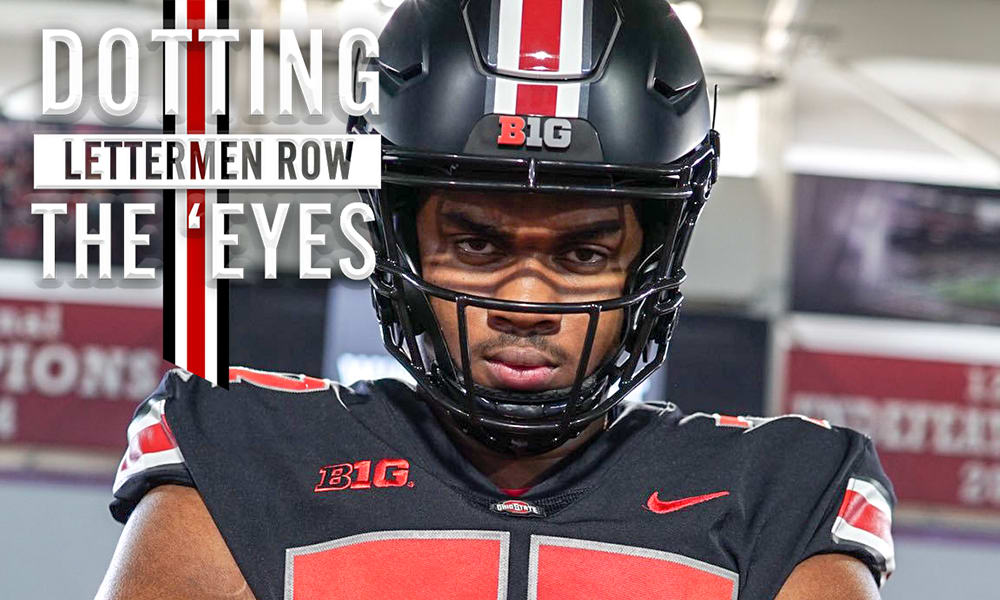 Paris Johnson has closed down his recruitment and will sign with Ohio State. (Paris Johnson/Twitter)

Stay in touch or be left out because Ohio State recruiting is a 24-hour, seven-day-per-week obsession. What’s the latest news as the Buckeyes build for the future? Get that and more Sunday through Thursday on Lettermen Row. Wednesday’s notebook has final thoughts on the expected announcement from Josh Fryar and shares an opinion on Buckeyes commitment Paris Johnson.

Paris Johnson opens up in Texas, what he said isn’t a surprise

When his official visit to Ohio State ended on June 23, Lettermen Row updated the recruitment of 5-star offensive lineman Paris Johnson and what was going to happen in his recruitment moving forward.

After doing a little digging on this trip…I think the Buckeyes should be breathing easy moving forward when it comes to the country’s top-ranked tackle prospect…Ohio State had nothing to gain by trying to put restrictions on Johnson’s commitment and his travel plans. Instead, it focused on what it could control: Showing why things with the Buckeyes are still on the right track.

I’m hearing that’s paid off and things should be effectively settled from here and moving forward.

That’s why reports from Tuesday afternoon out of Frisco, Texas, where Johnson is for The Opening Finals, aren’t a surprise: He’s fully committed to Ohio State and will sign in December before enrolling early in January. These last few months were a whirlwind for Johnson and his family. And, yes, there were moments of real doubt — primarily with LSU.

But again, we told you that months ago.

“Despite the multitude of trips to Georgia,” Lettermen Row wrote in April. “There are some sources who believe if there’s a program that the Buckeyes ought to be concerned about, it’s LSU.”

But right now and moving forward, there is no concern. Johnson is back to recruiting aggressively on the Buckeyes behalf and is feeling even better about the program right now than he ever has, according to his mother, Monica.

“It felt like it did when PJ committed a year ago,” Monica Johnson told Lettermen Row following his official visit. “It was a comfort. We were searching for that peace.”

That peace came from the manner that both sides handled a difficult few months between the Buckeyes and Johnson. It’s led him right back to where he was all along: Ohio State.

Let’s start here by addressing one thing: We don’t know for sure that Josh Fryar is announcing his commitment on Thursday, but we believe that he will based on his tweet from Monday afternoon.

If in fact Fryar, the country’s eighth-ranked center prospect who is being recruited by Ohio State because of his ability to play multiple positions along the line, is committing then the Buckeyes could have a final answer on their offensive line class with more than five months until signing day in December.

Fyrar has been recruited by Ohio State for a long time, even though he’s not been really discussed until recently. He’s made a half-dozen visits to Columbus, including his official visit two weeks ago. He’s rarely said much about Ohio State or any program because he’s just not into the world of recruiting.

He did, however, talk to Lettermen Row ahead of his official visit and said he’s hearing often from Ohio State and its coaching staff.

Over the course of the last month or so, different sources have indicated to Lettermen Row that at various times Penn State, Indiana and Ohio State have all been in the driver’s seat for a commitment from Fryar. But the timing of this big announcement, if it’s a commitment, is certainly very good for the Buckeyes.

The plans for Fryar had been to carry his recruitment into the fall. If he’s cutting it short this early, it’s likely to end up as another win for Ryan Day.

On Tuesday night, 3-star tight end Joe Royer committed to Ohio State. Wednesday morning saw the addition of 3-star linebacker Mitchell Melton. On Thursday, it’s believed that Josh Fryar, a 3-star lineman will follow up and do the same. Ohio State is also hot on the trail of Michigan 3-star athlete Cameron Martinez, and it already has commitments from 3-star linemen Jakob James and Trey Leroux and 3-star defensive lineman Ty Hamilton.

For star-chasers out there, that is concerning. For those inside of the Ohio State program, those players are valuable pieces of a group that is currently ranked as the country’s fourth-best 2020 recruiting class.

Personally, I’d recommend sharing the opinion of the people who make a living inside of the Woody Hayes Athletic Center over anyone else in this matter.

I know that stars matter and that rankings do make something of a difference. But when it comes to recruiting, it’s just one piece of the puzzle. If Larry Johnson believes Ty Hamilton is deserving and worthy of an offer at this point in the recruiting cycle, trusting his judgment seems reasonable after all he’s accomplished in his career. If Ryan Day is willing to stake his first recruiting class on the success of a quartet of 3-star linemen who have been vetted and evaluated by him and his coaching staff, trusting that he’s not making that decision lightly makes sense.

In some cases, like Mitchell Melton and Cameron Martinez (if he ultimately commits to the Buckeyes), these are players that have been recruited and treated as a priority by the Buckeyes for months. They are prospects that Ohio State values much higher than those who are ranking recruits arbitrarily.

The goal is always to win for Ohio State, and that means winning recruiting titles as well as on-the-field titles. Every player selected by the Buckeyes is a piece that the coaching staff believes can help reach that goal — and make no mistake, at this point these players are being selected by Ohio State.

These are not concessions or last resorts, and the coaching staff isn’t sweating the rankings about them one bit.

Enjoy the Fourth of July and be safe

With Independence Day approaching, just wanted to let you all know that there will be no Dotting the ‘Eyes on Thursday, Friday or Saturday. The Buckeyes recruiting notebook will return on Sunday.

Obviously, if there’s breaking news — and there probably will be — I’ll be here with the story.

Until then, enjoy the time with your families, celebrate our great country in a fun, safe way! And remember: no Stranger Things spoilers on Twitter, OK?