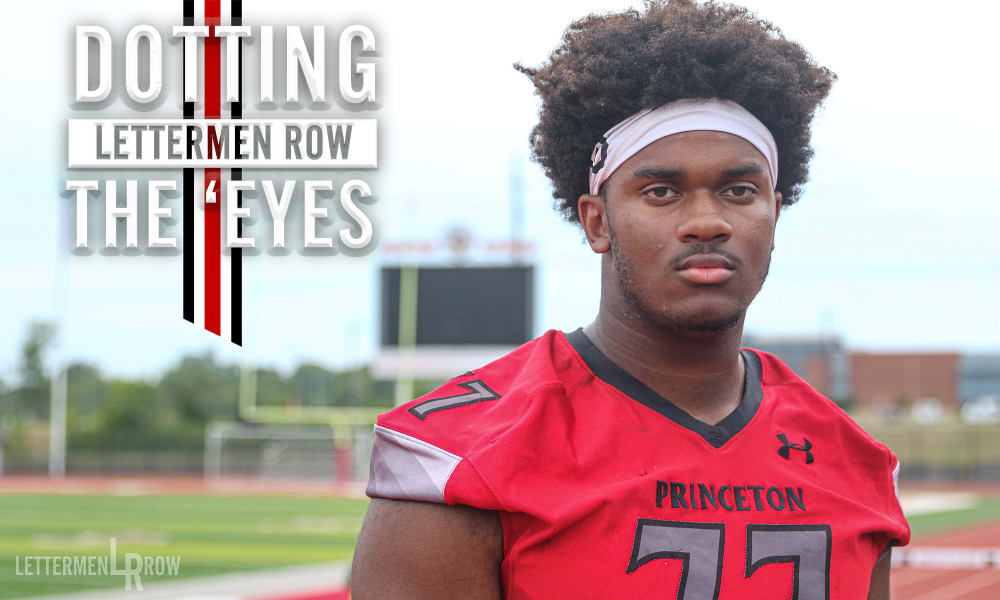 Ohio State commit Paris Johnson is in a new uniform and has happily put his recruiting behind him. (Birm/Lettermen Row)

Stay in touch or be left out because Ohio State recruiting is a 24-hour, seven-day-per-week obsession. What’s the latest news as the Buckeyes build for the future? Get that and more Sunday through Thursday on Lettermen Row. Today’s edition touches base with Paris Johnson and Jacolbe Cowan while introducing a top Georgia talent.

We’ve written here a number of times over the last few months about Buckeyes commitment Paris Johnson and the difficult decision he was faced with following the surprising retirement of Urban Meyer last December.

Johnson and his family were faced with tough circumstances and chose to remain committed to Ohio State while revisiting the schools he’d been previously interested in — with the blessings of Ryan Day and his staff. Those trips were designed to give the 6-foot-7, 290-pound, 5-star prospect another look at some top programs in the event that his feelings never came back around with the Buckeyes.

Those concerns faded early in the summer.

Johnson, following official visits to Georgia and LSU, always went right back to Ohio State. And each time he’d leave with any of his concerns squashed. Why? What was Ryan Day doing?

Simply put, the Buckeyes didn’t freak out. The coaches never stopped treating him the same. Day never stopped talking to him like his future was 100-percent, absolutely certain to be at Ohio State. It was that confidence, that calmness from Day and offensive line coach Greg Studrawa, that always made Johnson feel like the Buckeyes were home, even when other schools made a dent in the home-field advantage.

“Now that I think about, each time I’d come back, [Day] would always talk as if I was already reaffirming that I was coming to Ohio State,” Johnson told Lettermen Row during Cincinnati Princeton’s media day on Monday. “It was complete confidence. There wasn’t hesitation and it wasn’t awkward…as if I’d not taken any other visits.

“I’d talk to Coach Stud, and he’d be like, ‘Paris, this is your school. This is your thing.’ It was talking like I was already reaffirmed. I tried to keep it kind of open. I was still considering LSU and still considering Georgia. But eventually the conversation, it’d be me saying, ‘I can’t wait to get here.'”

That confident approach was drilled home with Studrawa as well. The Ohio State assistant spent a handful of years coaching at LSU, and never once tried to diminish the Tigers in any way, shape or form. For Johnson, that helped him illustrate that the Ohio State staff was genuine as ever.

“[Studrawa] would talk about how much he loved the experience [at LSU],” Johnson said. “There was no type of negative talk. I liked that he did that, because by saying that it made me feel like it wasn’t fake talk. He was being honest, talking about the LSU traditions, the game day and how it was great.”

There is a lot more that was discussed with Johnson, so keep an eye on Lettermen Row for another special episode of Birminology in the coming days.

It’s clear that Ohio State wants to add at least one more defensive lineman in its Class of 2020. And for a while now it’s seemed clear that Charlotte (N.C.) Providence Day lineman Jacolbe Cowan fit the bill as a top target.

After making an official visit to Columbus in June, Cowan has continued growing his relationship with the Buckeyes as he works toward an eventual college decision.

“Communication [with Larry Johnson] has been going well,” Cowan said. “Of course, with camp season here, the staff has been busy. But they have still reached out each week to check up on me.

“Coach Johnson’s message has really been just to continue to grind and take care of myself. We’ve definitely communicated about the remaining spots and what they have left along the defensive line. They want guys who can come in and make an instant impact, so that’s the main reason for them being picky.”

What Cowan means by picky is that the Buckeyes have begun to parse their options along the defensive line, even moving on from players that they’ve brought in for an official visit already. The need for numbers is not greater than the need for the right fit for the Buckeyes, and the fit obviously has to be right for Cowan as well.

He is still considering what to do with his remaining official visits, but he does know he’ll head to North Carolina and Georgia at some point. The 6-foot-5, 275-pound defensive tackle prospect also is considering getting back to Ohio State for a game this fall.

“I definitely feel like getting back up would help me get a better sense of the new program,” Cowan said. “I’ve enjoyed each of my three visits, so a fourth one could definitely be in the near future.

“What I’ve learned so far is that with Coach Day, the program hasn’t changed much and the guys love him. It would be nice to see how things actually are with him during the season.”

The country’s second-ranked 2021 athlete is succeeding on his mission to make a name for himself.

“Three years ago, we moved from South Florida” David Daniel, who now stars at Woodstock (Ga.) High School told Lettermen Row. “It was in the middle of my eighth-grade year, just after I won a super bowl in my youth league. My dad’s job moved us here. When my parents were searching for homes, I believed they reached out to some people that watched my youth film and they wanted him to move to McEachern or the Marietta area.

“But they settled in Woodstock and I love it here. Now I’ve got to make a name for myself and bring that attention to Woodstock.”

Had he ended up at Marietta or McEachern, two of Georgia’s powerhouse programs, the attention would’ve come much easier. But playing at Woodstock hasn’t stopped big-time colleges like Ohio State from finding the 6-foot-2, 185-pound athlete.

“I spoke to [linebackers coach Al] Washington several times before and during spring,” Daniel said. “I believe he also reached out and spoke to my coach to see how I been doing in the summer. He’s easy to talk to and has been genuine in the recruiting process. I haven’t had any discussions with Coach Day yet, but I’ve also spoken to [co-defensive coordinator Jeff] Hafley once.”

Daniel stayed local this past summer, visiting Georgia, Georgia Tech and Clemson. But he knows this upcoming season is one that will shape his recruitment moving forward. He is hoping to make his way to Columbus, but distance makes it hard to plan a game-day trip during the fall.

“My family and I spoke about the possibility of visiting Ohio State,” he said. “I want to visit, but it’s all on my family if we can take a trip. It might be hard during game days, but maybe for a junior day if they invite me.

“Ohio State has always been a top football program and have produced some of the best athletes in the country. I want to learn more about the academics and the support they provide their athletes and get a chance to see the campus and dorms.”

The Buckeyes are one of Daniel’s 26 scholarship offers, a list that includes the cream of the crop of college football. Alabama, Georgia, LSU, Oklahoma, Florida, Florida State and many more have made an early pitch for the top-40 national prospect.