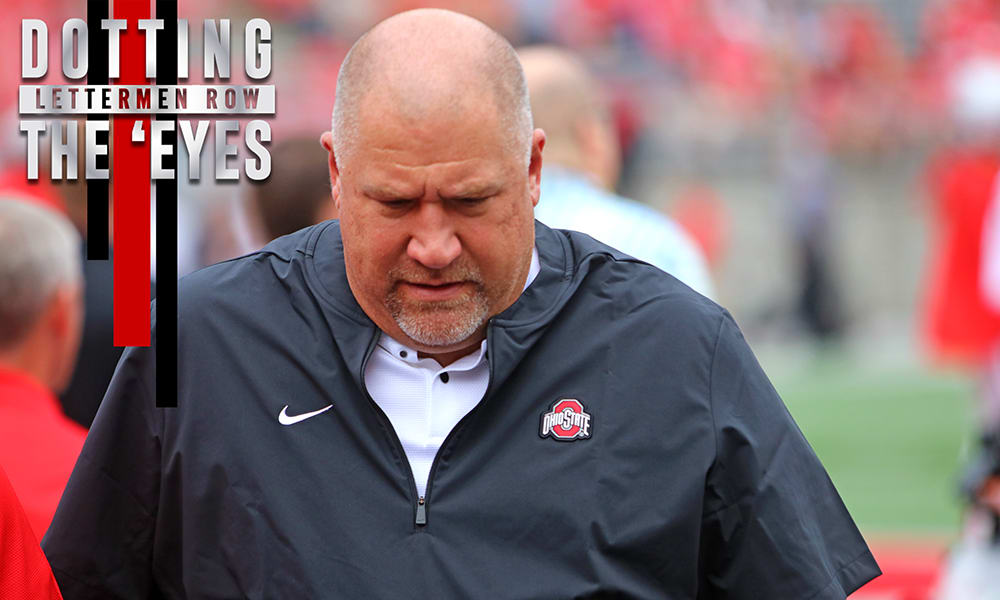 Stay in touch or be left out because Ohio State recruiting is a 24-hour, seven-day-per-week obsession. What’s the latest news as the Buckeyes build for the future? Get that and more Sunday through Thursday on Lettermen Row. Today we look at the buzz around Paris Johnson and his recent trip to Georgia and other Buckeyes recruiting stuff.

Getting a handle on Paris Johnson, Georgia

We mentioned it on Thursday, but in case you missed it: Ohio State commitment Paris Johnson made an official visit to Georgia over the weekend.

We’ve been cautioning for months that Johnson would be taking a handful of visits while remaining committed to the Buckeyes. But this trip to Athens was his third in two months, and it certainly feels a little bit more worrisome for Ohio State. Johnson was one of a handful of the country’s top-ranked players visiting Georgia for its G-Day — a star-studded event that rivals any school’s biggest recruiting weekend.

The Buckeyes hosted Johnson the weekend before, and he at least left the Georgia campus without making any sweeping changes to the status of his commitment to Ohio State. He’s committed and looking while he continues to try and grow his relationship with Ryan Day and the coaching staff after the retirement of Urban Meyer.

There’s little doubt that Johnson will return to Ohio State at some point in the near future, but there’s also the expectation that he’ll visit LSU in the upcoming weeks for an official visit. Despite the multitude of trips to Georgia, there are some sources who believe if there’s a program that the Buckeyes ought to be concerned about, it’s LSU.

Either way, it’s not giving the Buckeyes the warm-and-fuzzy feeling they would hope for from the the top-ranked player in the recruiting class — especially with a the player who essentially lived in Columbus last football season, which is basically what Johnson did last year. The Buckeyes need him to be the lead recruiter for their program, not being recruited elsewhere.

Ohio State hosted Pinnacle (Phoenix) High School 4-star offensive tackle Tosh Baker a few months back, and last weekend it extended a scholarship offer to another offensive lineman in the Valley of the Sun.

Very great full to receive an offer from Ohio State University‼️ Thank you @Coach_Yurcich for this opportunity. pic.twitter.com/Itus0t8WMl

That is Williams Field (Gilbert, Ariz.) 3-star tackle Noah Nelson, a 6-foot-8, 295-pound tackle ranked as the country’s 47th-best player at his position and the 13th-ranked player in Arizona for 2020. Nelson is a player who has been slowly moving up the recruiting rankings and has offers from Michigan and Oklahoma among his 17 total scholarships.

Michigan is the favorite to land him right now. But it’s not too late for any school to get involved with Nelson at this point.

“I don’t plan to commit until the beginning of my senior year,” Nelson told Lettermen Row. “So yes, they can [still get involved]. The offer was out of the blue.”

The Arizona standout has not been to Ohio State, but he and his family will try to arrange a June visit.

“We’ve kind of talked about going there in the middle of June,” Nelson said. “Ohio State is a powerhouse team and has been very strong for years. I am interested and will be checking them out.”

Had a great visit at The Ohio State University!! #GoBucks 🌰 pic.twitter.com/Ipm3eGrt4s

Nixon, the country’s 22nd-ranked receiver according to 247Sports, was in Columbus for the second time.

“Every time I go up there it just gets better,” Nixon told Lettermen Row. “The feeling I get when on campus there is indescribable.”

Ohio State is one 12 schools, including Florida State, Georgia, Florida and Auburn, that has offered Nixon. The trips to see the Buckeyes have provided him a chance to see things he doesn’t see elsewhere.

“What stood out to me was what they can help you in life after football,” he said. “Real Life Wednesdays, that really is different. I haven’t seen that from other schools.”

Though he’s listed at 6-foot-4 and 205-pounds on his 247Sports profile, Nixon is closer to 230 pounds and is a player who could grow into a tight end at the next level. He’s not opposed to that idea if a school wants him to play tight end.

“That’s not a problem with me,” he said. “Linebackers would not be able to move with me if that did happen.”

A couple of recent Buckeyes offers and one target that was close to committing last winter have pledged elsewhere.

Georgia 4-star safety Brian Branch committed to Alabama a week after taking an official visit to Oklahoma. The Sooners were very much in the mix because of Alex Grinch, who recruited Branch while he was the co-defensive coordinator for the Buckeyes last season. Branch visited Ohio State for the late-November tilt against Michigan and was very close to committing during that visit, but the timing was just not right. A month later Grinch was gone and his recruitment slowed a bit and Ohio State never really recovered from it.

Texas defensive back Ryan Watts, the country’s 15th-ranked cornerback, chose to commit to Grinch and the Sooners. Ohio State offered on Feb. 15, but he never visited the school.

Former Texas A&M commitment Akinola Ogunbiyi, who reportedly had Ohio State as his dream school despite never visiting and having very little in the way of an actual relationship with the coaching staff to this point, committed to Georgia on his weekend visit to Athens.

Recently offered 4-star linebacker Jordan Botelho, a Hawaii native who is the country’s third-ranked inside linebacker, committed to Notre Dame.