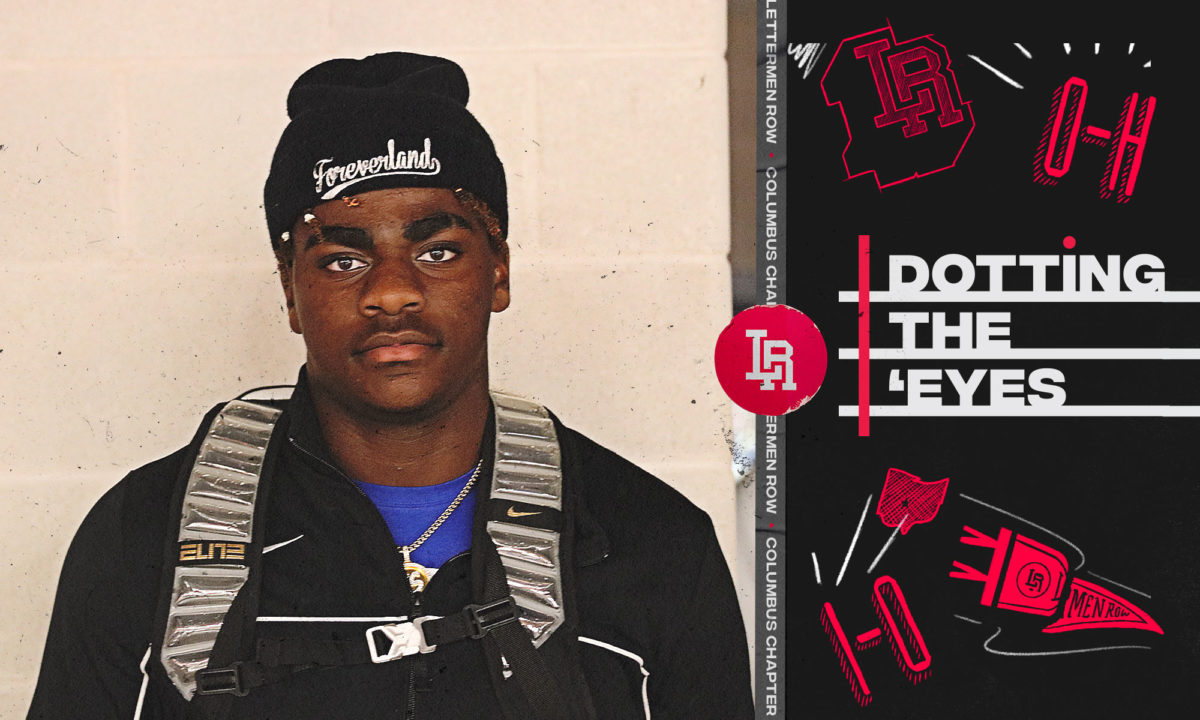 Omari Abor grew up an Oklahoma fan but is taking a hard look at Ohio State, Alabama and others. (Birm/Lettermen Row)

Stay in touch or be left out because Ohio State recruiting is a 24-hour, seven-day-per-week obsession. What’s the latest news as the Buckeyes build for the future? Get that and more Sunday through Thursday on Lettermen Row. Today’s notebook has the news and notes from Tuesday’s stops as we travel around the Lone Star State.

Due to inclement weather and injury, Lettermen Row didn’t get a chance to talk with 5-star defensive end Omari Abor during a stop at Duncanville High School on Tuesday. There was, however, still some conversation about the major Ohio State target and where things could be going in his recruitment.

First and foremost: There’s no denying that Abor — the No. 2-ranked defensive end in America — has a long-held affinity for Oklahoma. The Sooners are a major player not only in his recruitment, but in the fight for every top prospect in the Dallas area. That said, Lettermen Row was told that his recruitment is pretty wide open right now, and that the 6-foot-5, 250-pound lineman is very seriously considering the offer he has from the Buckeyes.

That’s not a surprise, of course, because Abor has told us that. But the buzz on Tuesday was significant enough to mention it again. Abor has done some real, serious research into who Johnson and how rich the tradition of his work is as well. Duncanville recruiting coordinator Gabe Samuels actually joked that some schools believed Johnson being involved in recruiting the Panthers star would be enough to eliminate other schools sight unseen.

But there’s work to be done for Ohio State. And while the battle here may ultimately come down to Ohio State and Oklahoma, Texas A&M, LSU and Alabama were each mentioned as well. There’s official visits set with the Tigers and the Crimson Tide for the end of June. The Buckeyes coaches are in a prime position when they host Omari Abor over the June 4 weekend, and there’s been some discussion from Abor about the desire to visit Columbus twice this summer if possible.

This recruitment is going in a good direction for the Buckeyes. Now it’s about taking the next step to win it.

Buckeyes are all in on linebacker Anthony Hill

Another 5-star defender from the Dallas area is 2023 linebacker Anthony Hill from Denton Ryan High School. He’s listed as a defensive end in his national recruiting profiles, but the Buckeyes 100-percent view the 6-foot-2, 225-pound sophomore as a linebacker.

The relationship between Hill and Al Washington is growing. From talking to sources around the Ohio State program, he’s viewed right alongside Pickerington Central 5-star Sonny Styles as a sure-thing player in 2023.

What Tuesday’s visit didn’t reveal was how close Hill is to arranging a visit with the Buckeyes this summer. If he doesn’t get that set up, there’s no doubt the odds of pulling him out of Texas go way down. No matter how many brief conversations he has with Al Washington, without the chance to see Ohio State this summer or this upcoming season, it’s hard to see him in Columbus for college.

This is a player who will have offers from every major program in the country. In-person relationship building is going to be a must. Hill mentioned Buckeyes great Ryan Shazier as one of the players he grew up watching closely, so he’s familiar with Ohio State, for sure.

For his recruitment to get where the Buckeyes want it to be though, it’s all about the visit. Plain and simple.

First of all, Cook is a really engaging kid with a great energy about him. It’s easy to see why Brian Hartline has grown fond of him since starting conversation with him a little more than a month ago. As a player, Cook is very explosive and athletic and his confidence is evident in talking to him.

Oklahoma, again, may be the early school to beat. But Cook also grew up idolizing Buckeyes junior Garrett Wilson, so that could help level the playing field. The Sooners caught his attention over the years because of their wide-open offense and their success with receivers like him, guys like CeeDee Lamb and Hollywood Brown.

Brian Hartline doesn’t offer kids unless he believes they’re the right person on and off the football field. It’s clear Cook fits that mold. Like most young players from outside of the Buckeyes traditional recruiting footprint, an early offer and an early visit are key. That visit could happen in June, and Cook is working on it.

Austin Jordan not phased by recent defensive back commits

With a top-three list of Ohio State, Oklahoma and Texas, Austin Jordan is looking to make a decision shortly after his June official visits. The Buckeyes will host him the weekend of June 11-13. Ohio State is the only school of the finalists he’s not visited in some capacity yet.

While that could be a disadvantage, Jordan indicated that the Buckeyes four defensive back commitments are not. He knows that competition is everywhere with three prestigious schools in his top three. So, despite two recent commits from defensive backs, the June visit is still on.

Finally, back at Duncanville and 4-star offensive guard Jaylen Early.

Ohio State continues to be in touch with the 6-foot-4, 290-pound lineman. The effort is led by Greg Studrawa, who was in contact on Monday. Early is making his first official visit to Ohio State, but not the first weekend of June. He’ll be in town over the June 11-13 weekend instead.

He is, however, trying to move it up to the pivotal June 4 date in Columbus. Early is one of a handful of linemen still being looked at closely by the Buckeyes. The chance to spend more personal time over the June 11 weekend likely explains the Ohio State preference. Whether or not that changes remains to be seen.