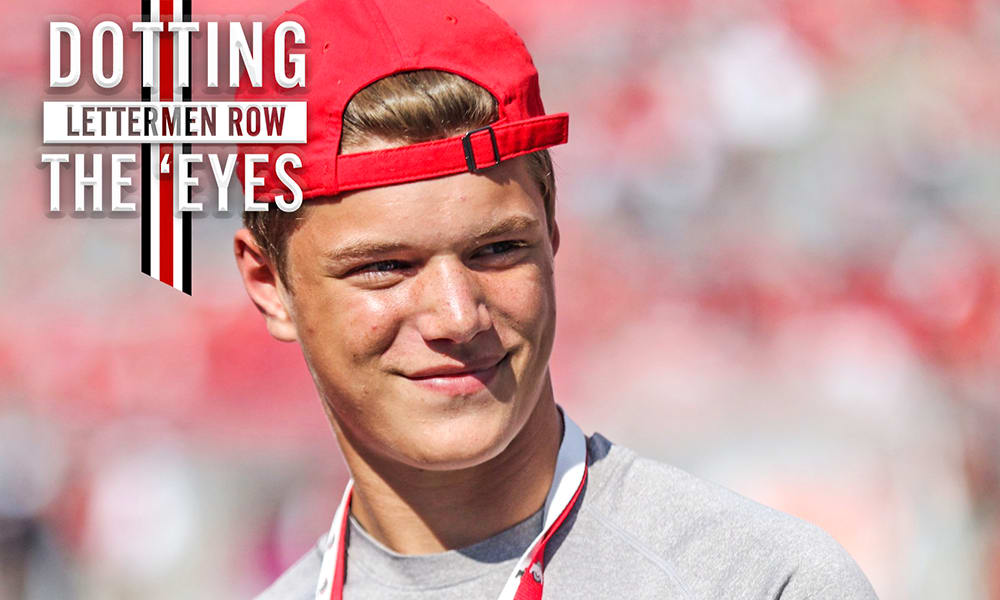 Ohio State made its 2021 quarterback decision, and that helped push J.J. McCarthy to Michigan. (Birm/Lettermen Row)

Stay in touch or be left out because Ohio State recruiting is a 24-hour, seven-day-per-week obsession. What’s the latest news as the Buckeyes build for the future? Get that and more Sunday through Thursday on Lettermen Row. Today we talk about a rash of new Ohio State football offers and discuss how Ryan Day’s decision in the 2021 quarterback derby could set the tone for the future of the Buckeyes biggest rivalry.

J.J. McCarthy commits to Michigan as 2021 battle shapes up

In case you missed it over the Mother’s Day weekend, Michigan landed a 2021 quarterback commitment.

I know Michigan recruiting isn’t the main topic here, but in this case, I think it’s worth discussing. I believe the commitment of J.J. McCarthy, who was one of a handful of signal-callers being seriously considered by Ryan Day and the Buckeyes, will ultimately define his tenure as the coach of the program.

Yes, I know that sounds hyperbolic, but the decision to bring in Kyle McCord, knowing full well it would likely send McCarthy in the direction of the Wolverines, could shape the future of the greatest rivalry in sports for the foreseeable future. Day and the Buckeyes had the first pick and first shot for McCarthy and went in a different direction.

How that turns out on the field in 2021 and beyond will be a story worth watching for years to come.

We mentioned here it months ago and again last week, but things are heating up when it comes to the recruiting efforts for Ohio State against Notre Dame, specifically on the offensive line.

Michael Carmody is the top remaining tackle target in 2020 for Ohio State, but a recent Notre Dame offer has the 247Sports crystal ball predictions all flowing in the direction of the Fighting Irish in the last week. That doesn’t mean Ohio State is backing off, of course, and it is hoping Carmody’s planned June official visit happens. The only way it doesn’t is if he commits to Notre Dame in early June when he makes what will be a pivotal trip to South Bend.

Another offensive lineman who is getting set to begin his official visits, Colorado’s Reece Atteberry, appears to be heading toward a Notre Dame-Ohio State finish — but he will also take a June official visit to Duke. The Buckeyes visited Atteberry last week, but so did the Irish. Those two schools will get official visits on consecutive June weekends with a planned decision coming in July.

He has no major scholarship offers yet, but Ohio State is one of a number of schools taking the time to get to know Pennsylvania 2020 defensive lineman Fatorma Mulbah. Toledo, Bowling Green, Temple, Army and Buffalo have recently extended a scholarship offer to this diamond-in-the-rough prospect in recent weeks.

A native of Liberia, Mulbah moved to the United States in 2014 and began playing football two years later. A talented athlete who wrestles and has also played soccer and basketball, the 6-foot-3, 257-pound lineman visited Ohio State in late March and checked out a spring practice.

“Penn State, Michigan State, Iowa, Rutgers, North Carolina, and Syracuse, all want me to go camp before they can pull the trigger on an offer,” he said. “Larry Johnson just wants to see how coachable I am and get to work with me 1-on-1. I’m going back June 15 for camp at Ohio State.”

Mulbah is from Harrisburg (Pa.) Susquehanna Township and reflected on his previous visit to Ohio State fondly.

“For my first time at Ohio State, it’s a great place to be,” he said. “I loved their practice and what stood out to me was how competitive their practice was. It was a great experience. Ohio State is just different. It means a lot to me to even talk to Larry Johnson, because he’s one of the best defensive line coaches in the country, if not the best.

“He’s a great person and I believe he can help make me the player that I wish to be.”

Last week was a busy one for Ohio State coaches on the recruiting trail, and a number of new offers went out to young players all the country. While we certainly try to update every single offer that comes through for an Ohio State target, it’s not always that easy to do. So, here’s an abbreviated rundown of these newly extended scholarships.

A handful of the most recent offers came in the state of Texas. Argyle High School athlete Cristian Driver, the son of former NFL All-Pro receiver Donald Driver, picked up an Ohio State offer. He has 15 early offers and is one pace to be one of the country’s highest Class of 2022 prospects.

The Buckeyes offered Denton defensive lineman Ja’Tavion Sanders. The 2021 prospect has added offers from TCU, Purdue and Georgia Tech in the days since. He’s a 6-foot-4, 220-pound prospect and is currently ranked as the fifth-best player in Texas in the sophomore class. Grandview 2021 tight end Dametrious Crownover is the country’s second-ranked tight end and was also offered by the Buckeyes, with Kevin Wilson extending the scholarship offer. The Buckeyes also offered 2021 offensive lineman Cullen Montgomery, a 6-foot-5, 290-pound prospect from Bellaire Episcopal.

Finally, before we leave Texas, the Buckeyes offered defensive back Christian Gonzalez. Gonzalez is a 6-foot-1, 195-pound safety prospect and he’s blown up recently, adding offers from Alabama and Notre Dame as well.

A 2021 offensive lineman from Orem (Utah) High School, Kingsley Suamataia is already planning a visit to Columbus after being offered at the end of last week. Suamataia is the 10th-ranked offensive tackle in America in his class.

2022 defensive lineman KJ Miles, a 6-foot-4, 260-pound rising star at New Jersey’s St. Peter’s Prep, was offered by the Buckeyes. Alabama and Michigan have already offered, and it looks like Miles will end up being one of the country’s top overall players in the Class of 2022.

Finally, another 2020 defensive lineman was offered by Johnson. That is Xavier Carlton offer, a massive 6-foot-7, 265-pound lineman who just recently moved to Draper, Utah from Modesto (Calif.), where he’d been playing his high school football. A Utah legacy, Carlton is the country’s 14th-ranked strongside defensive end and a player who is likely to take his recruitment all the way to February, so there’s plenty of time for the Buckeyes to get familiar with him.