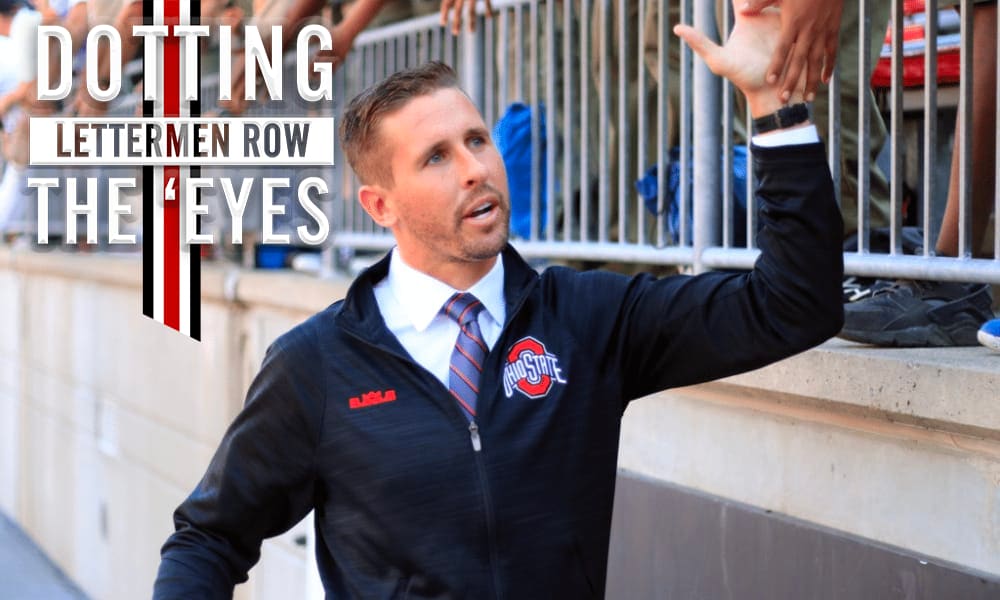 Brian Hartline has proven to be one of the country's elite recruiting coaches. (Birm/Lettermen Row)

Stay in touch or be left out because Ohio State recruiting is a 24-hour, seven-day-per-week obsession. What’s the latest news as the Buckeyes build for the future? Get that and more Sunday through Thursday on Lettermen Row. Today’s notebook addresses the Buckeyes latest commitment and takes a look at the biggest remaining questions for Ohio State on the recruiting trail in 2020.

Brian Hartline continues to be home run for Ohio State

Monday’s decision from Mookie Cooper, the 4-star receiver from St. Louis, is the latest bit of evidence in support of the rising coaching star. Ohio State was almost an afterthought in Cooper’s recruitment as recently as March, but the wide receivers coach continued to plug away at the former Texas verbal.

With just one visit to Columbus under his belt, the 5-foot-9, 185-pound receiver committed to Ohio State and put the wraps on Hartline’s receiver haul in the 2020 cycle.

Cooper is the country’s 11th-ranked receiver prospect. So, Hartline has helped secure since November the commitment of Julian Fleming (No. 1), Gee Scott (No. 13) and Jaxon Smith-Njigba (No. 18) and has also landed Jayden Ballard in the Class of 2021 in that stretch. Muskegon (Mich.) athlete Cameron Martinez could also play receiver for the Buckeyes and provide another explosive option as Ohio State proves once again that it doesn’t rebuild, it reloads.

After losing Terry McLaurin, Parris Campbell and Johnnie Dixon after last season, and knowing that K.J. Hill, Austin Mack, Binjimen Victor and C.J. Saunders will be moving on after this one, it was imperative for Hartline and Ryan Day to replace that talented group of leaders. They did that in spades and have raised the bar on expectations in Columbus.

The receivers room in the Class of 2020 is full for the Buckeyes. And though there will be some remaining discussion about Rakim Jarrett over the next few months, adding him to the Ohio State class would require some attrition from the class. I don’t think that’s likely to happen currently.

But there are a few other important questions left for Ohio State as it looks to effectively wrap up Ryan Day’s first full recruiting class by the end of July.

Here are a few of the items to consider as the Buckeyes move forward over the next few weeks. With the recruiting dead period happening, there’s not a lot of news to report. So this week, we’ll try and explore these big remaining questions for Ohio State in the Class of 2020.

How will Tony Alford’s running back recruiting play out?

Alford and Ohio State have been waiting patiently for some good news with running backs, and with an expected decision from the top two targets on the board right now in Bijan Robinson and Jaylan Knighton, there will be some resolution in the near future.

If the Buckeyes are able to land each of those prospects, then there are no more questions. If they fail to secure either, the next move will be crucial. But the truth is that there are no real options out there for the Buckeyes that would be able to replace Robinson on the big board.

If Ohio State fails to bring in Robinson or Kendall Milton — and it seems he’s absolutely headed to the SEC — the entire running back board will require an overhaul heading into the season.

Will Ohio State actively pursue another quarterback in 2020?

I’ve been on record suggesting that the Buckeyes should recruit another quarterback in 2020. That’s not because Jack Miller isn’t an elite quarterback, because he is.

Simply put, the numbers in the quarterback room for Ohio State show a serious need at the position, one that will be amplified following the 2020 season. When Justin Fields and Gunnar Hoak depart after the 2020 year, as of right now the Buckeyes will have only Jack Miller, one year into the program, on scholarship at quarterback.

That is less than ideal, obviously.

Ryan Day reportedly reached out to Elite 11 winner C.J. Stroud following his impressive display in Frisco. But Stroud has a number of big-time offers despite his current 3-star ranking and isn’t likely to set himself up as a second option in a class.

We’ve talked about North Texas commitment Kade Renfro here in the last month, and he’s a viable option — more than a guy like Stroud is right now. But with only five or six spots left in the recruiting class, the true options are limited. Will the Buckeyes explore the free-agent market again at quarterback next spring instead?