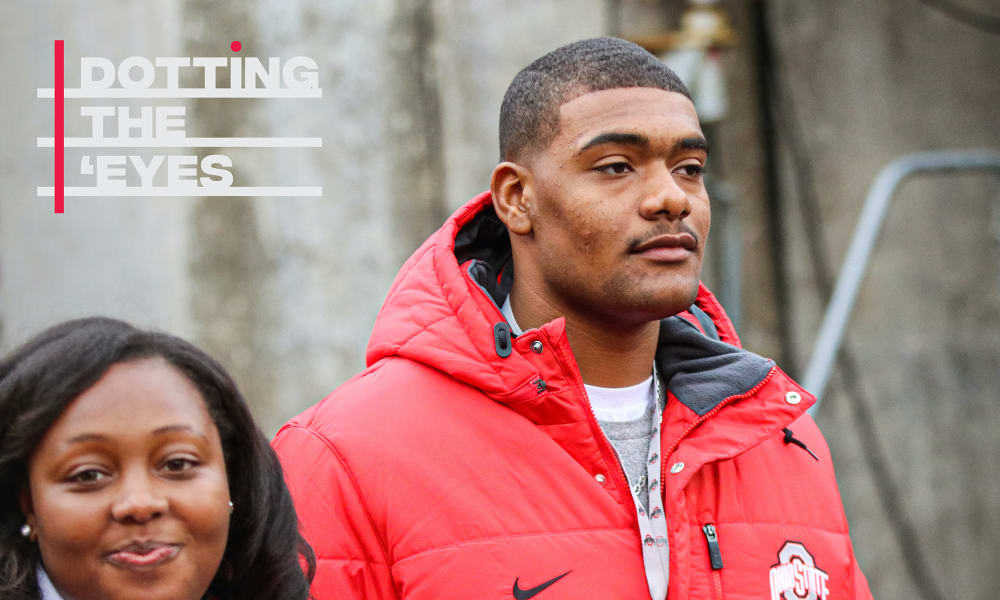 Stay in touch or be left out because Ohio State recruiting is a 24-hour, seven-day-per-week obsession. What’s the latest news as the Buckeyes build for the future? Get that and more Sunday through Thursday on Lettermen Row. Sunday’s notebook looks at the biggest storylines from a huge recruiting weekend at Ohio State.

Just hours after the Buckeyes finished off Penn State to improve to 11-0, Cincinnati Winton Woods running back Miyan Williams announced his flip from Iowa State to Ohio State, giving the Buckeyes their running back commitment in the Class of 2020 after months of scrambling to fill a need at the position.

One source in Columbus compared the 5-foot-9, 210-pound Williams to a former Buckeyes running back that is still making noise in the NFL.

“He’s a Carlos Hyde type, to some degree,” the source said. “He’s a physical, downhill, mauler. He’s a tough-ass runner.”

That’s what made Williams worth chasing for Ohio State, despite his recruiting ranking being a little lower than star-chasers might like to see. The addition of Williams should all but end the running back recruiting efforts in 2020 unless a running back like Bijan Robinson decides to reconsider his commitment to Texas as that program continues to struggle amid rumors of unrest in Austin.

Robinson is very private and has maintained publicly that he’s sticking with the Longhorns unless Tom Herman is relieved of his duties there, and despite the disappointing year by Texas it seems unlikely that the administration in Austin will go to that length in the attempt to fix things.

What could be interesting potentially is if Tim Beck or Stan Drayton — or both — are replaced. Beck has been vital in recruiting Arizona for Texas, and Drayton’s history of working with running backs like Ezekiel Elliott made him an attractive option as a position coach for Robinson.

Buckeyes make a move with Xavier Carlton, but will it last?

For the last few months, Ohio State has recruited Xavier Carlton, a 4-star defensive end from Utah, quietly and consistently. Larry Johnson has done what Larry Johnson does, building a relationship but not forcing it. Johnson lets the work of the defensive line that he’s built with the Buckeyes serve as an enticer of sorts, hoping that group and its performance and tightly-knit bond would shake up the recruitment of Carlton if he ever made the visit to Ohio State has been discussed for a while now.

He did make that visit, an official, this weekend as Ohio State took on Penn State. Carlton arrived late Friday night and left early Sunday morning, so there wasn’t a whole lot of time for the Buckeyes and the coaching staff to impress the 6-foot-7, 260-pound defensive end and his family. But nonetheless the overall buzz around the Buckeyes chances improved from unlikely to possible.

The challenge from here is to maintain the momentum coming out of this visit as Carlton, who took an official to Utah a week ago, checks out the other schools still on his list. Washington has been a big-time player in his recruitment for a while now, and Cal is also on the shortlist of schools that will receive an official visit in the near future.

When he visited Ohio State in April, J.C. Latham was a defensive line prospect who was getting familiar with the Buckeyes program.

As he returned to the school over the Penn State game weekend, he’s a top 100-ranked offensive tackle prospect who has become one of the priorities for Ohio State in the 2021 recruiting class. The 6-foot-6, 290-pound lineman made his way to town with his younger brother Langston, and he saw everything that the Buckeyes could offer him.

“It really opened my eyes about my future,” Latham told Lettermen Row. “They showed me what I could do on and off the field.” 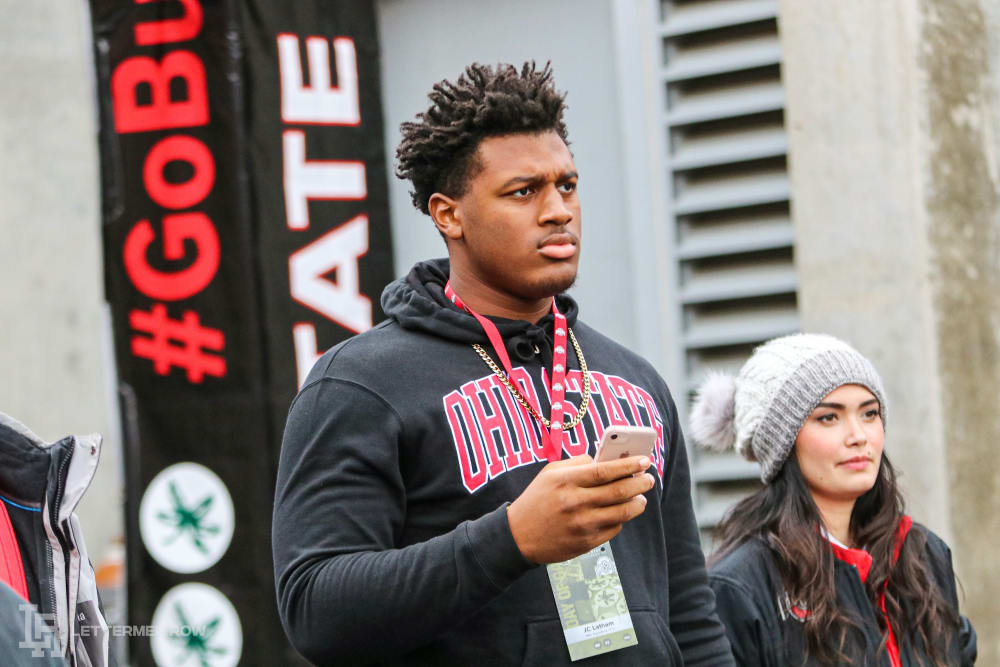 Latham, who plays at the IMG Academy and is originally from Wisconsin, spent the weekend visiting family in Akron. He’s comfortable in Ohio and at home with the Buckeyes. With offers from LSU, Wisconsin, Michigan, Oklahoma and more than 20 others, he’s a prospect with a number of options — but Ohio State has done well to position themselves from here.

“It’s the relationship they’ve built with me and my family — the coaches and the fans, coming up to me and my family, making sure we were OK,” he said. “[Ohio State] makes sure your future is secure even if — God forbid — I get injured. They make sure you get an education and a shot at the league.”

Right now, the Buckeyes are near the top of the list for Latham, and he’s not sure what is coming next in his recruitment.

“They are definitely up there,” he said. “I don’t know what my future holds, and I don’t know yet about other visits.”

He was offered by Ohio State in June, and since then the Buckeyes have made sure that Bryce Steele, a 3-star safety/linebacker from Alexandria (Va.) Episcopal High School, knows he’s a priority for them.

Ohio State is a priority for the 6-foot-1, 195-pound Steele as well, a feeling that was cemented during his visit to the school on Saturday. 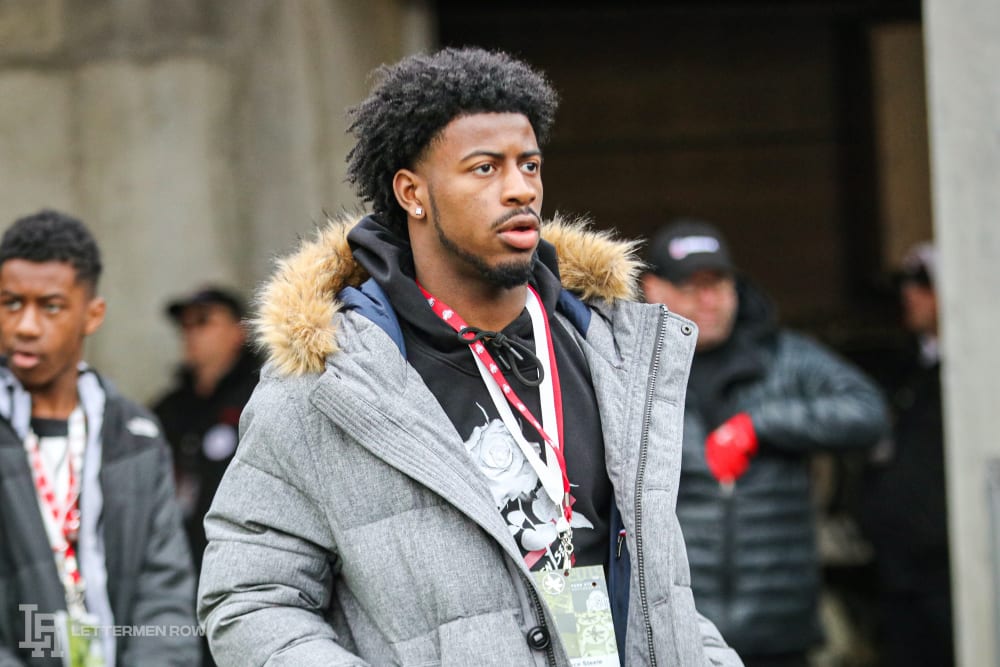 “Ohio State is a top priority for me right now,” Steele told Lettermen Row. “[The visit] was incredible. It was the experience of a lifetime. I think it was just the atmosphere that stood out the most to me. It was crazy.”

Steele, being recruited by the Buckeyes in their hybrid Bullet position, checked in with a handful of Ohio State coaches after the game.

“I talked to [linebackers coach] Al Washington, [defensive coordinator Jeff] Hafley and [Larry] Johnson,” Steele said. “They were happy that I was on campus and told me how much they want me in the program. They see me as a good fit in their defense.”

Next weekend, Steele will head to Michigan, and he’s excited to see how the two programs stack up. It could go a long way toward his final decision, which is going to come sometime in March, though the date isn’t set yet.

“It’ll be back to be back games seeing Ohio State,” he said. “I’m excited. I’m excited to see both sides of game-day for the two teams.”

I say kind of because the 6-foot-1, 180-pound Harmon has actually had an offer from Ohio State for more than a month now. He said it actually preceded his visit to the Buckeyes campus in early October.

“I’ve had the offer for about two months, but my high school team doesn’t allow us to post offers during the season,” Harmon told Lettermen Row. “I talk to them Ohio State almost every day.”

Harmon is the country’s No. 77-ranked cornerback prospect. but this early offer from the Buckeyes, along with offers from Michigan and Virginia Tech would imply he’s ranked a tad too low.