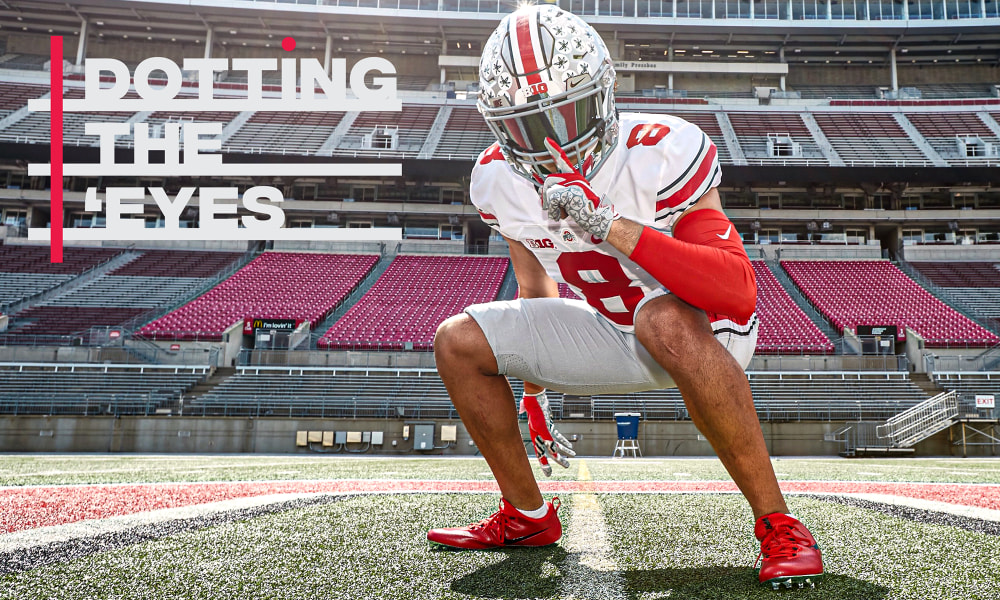 Lathan Ransom is completely locked in with his Ohio State commitment. (Lathan Ransom/Courtesy)

Stay in touch or be left out because Ohio State recruiting is a 24-hour, seven-day-per-week obsession. What’s the latest news as the Buckeyes build for the future? Get that and more Sunday through Thursday on Lettermen Row. Monday’s notebook catches up with Buckeyes commitment Lathan Ransom and updates the recruitment of running back Miyan Williams.

Almost as soon as he committed to Ohio State in July, the rumors about how solid Lathan Ransom’s verbal pledge would be started. Those rumors got louder when his teammate at Salpointe Catholic (Tuscon, Ariz.), Bijan Robinson, spurned the Buckeyes for Texas, one of the programs Ransom himself visited officially and was seriously considering.

As his senior season started, and thanks to his commitment, Ransom’s recruitment has quieted down. The 4-star safety was very clear about his intentions from here.

“All the schools that were interested in me still are,” Ransom told Lettermen Row. “But I don’t respond anymore. I’m completely committed to Ohio State. [Buckeyes defensive coordinator] Jeff Hafley and [secondary coach] Matt Barnes contact me every day.”

Hafley’s relationship with Ransom drove his recruitment and has carried over into his time as a commitment. That relationship was built on a trust that the first-year Ohio State assistant would change the Buckeyes defensive culture after a disappointing season a year ago. So far, Hafley has clearly done that.

“I believed in Coach Hafley — he’s the biggest reason I chose Ohio State,” Ransom said. “To see how much he changed the whole culture of the defense is crazy, but they’ve been balling.”

It’s been a little bit over a week since Ohio State offered Winton Woods (Cincinnati) running back Miyan Williams, and to this point things have remained pretty much status quo for the Iowa State commitment.

Williams is staying pretty tight-lipped about the Buckeyes offer and what it means for his recruitment. But it seems clear that the state of Ohio’s 25th-ranked prospect isn’t in a hurry to make any sort of changes. He has been talking to Buckeyes running backs coach Tony Alford, but the conversation has been perfunctory according to the 5-foot-9, 215-pound Williams.

For most kids from Ohio, being offered by the Buckeyes is a game-changer. And it while it still may end up being one for Williams, he’s playing it very cool at the moment.

“Not really, it doesn’t [feel different],” Williams said. “I’m just happy to say I have the offer.”

There’s still no visit planned for the Cincinnati prep standout. But even when does get sorted out, don’t anticipate it arriving with any real fanfare. Williams has been committed to Iowa State since July 4.

Ohio State hosted Episcopal (Alexandria, Va.) safety Bryce Steele over the summer for a one-day camp, and it offered the 6-foot-1, 195-pound athlete following that visit.

Since Sept. 1 rolled around, Virginia’s 13th-ranked junior has continued to grow his bonds with the Buckeyes.

“We have a strong relationship because of how much we communicate with each other,” Steele told Lettermen Row. “I talk to [linebackers] Coach [Al] Washington and [defensive line] Coach [Larry] Johnson. They tell me how excited they are about me and how I fit well into the defense.”

The Buckeyes defense is one of the reasons why Steele is sure to include Ohio State in his top schools, a list that he says will drop soon as he plans to make a spring 2020 decision. That decision will be influenced by a number of things, of course, including his next visit to Columbus to see a program he’s very high on.

“I am going to the Penn State game, and even though I’ll be on the Michigan sidelines, I’ll see the Buckeyes at that game in late November as well,” Steele said. “[Ohio State] has amazing coaches and incredible athletes, and when the two are put together it’s unstoppable.

“They’re well-coached, aggressive and disciplined. This past week at Nebraska, specifically, they were incredible. They haven’t even reached their full potential, either.”