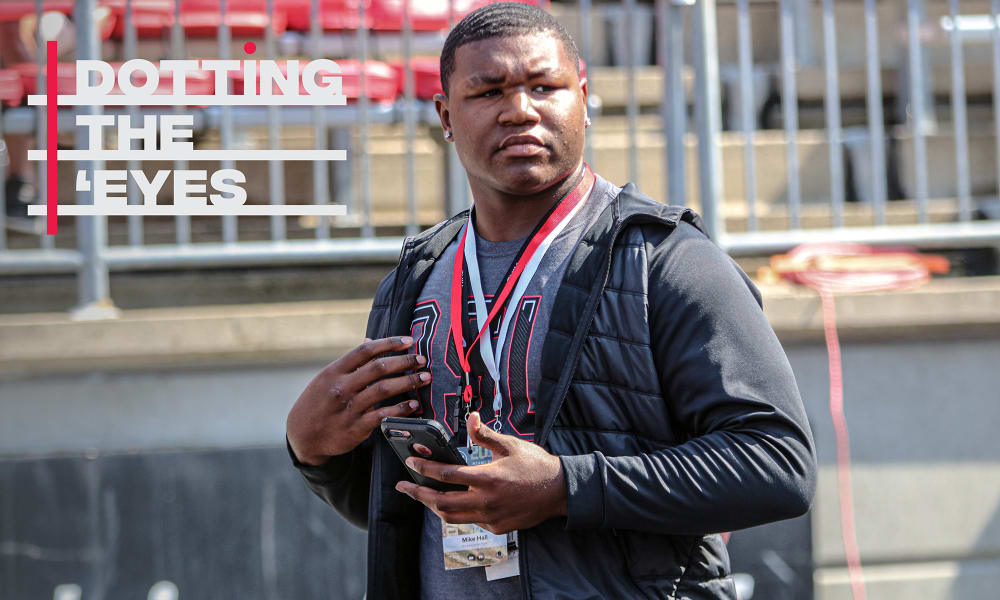 Mike Hall is a name to know in the Class of 2021 for Ohio State. (BIrm/Lettermen Row)

Stay in touch or be left out because Ohio State recruiting is a 24-hour, seven-day-per-week obsession. What’s the latest news as the Buckeyes build for the future? Get that and more Sunday through Thursday on Lettermen Row. Today’s notebook introduces a defensive tackle to know inside of Ohio and more.

Ohio State hosted Streetsboro defensive tackle Mike Hall for a visit during its home game against Miami (Ohio), and the 3-star prospect was thrilled to be in attendance.

“That feeling, walking down the tunnel at Ohio State, felt like a dream come true,” Hall told Lettermen Row. “Really, when I first entered the tunnel it was like a moment of silence like I had entered into a different world all alone and blocked all the noises out. I felt like I was going to play that day.”

That, of course, would be impermissible. What is permissible though is for the Buckeyes to begin recruiting the 6-foot-3, 275-pound defensive tackle and evaluating if the state’s No. 21-ranked player is somebody who could help the program. So far, what they’ve seen on tape is encouraging. And what Michigan State, Iowa State, Cincinnati and others saw in person over the summer was impressive enough to warrant his seven early scholarship offers.

“I’d heard from Ohio State ever since I visited for the Big Man Camp in June,” Hall, who doubles as an offensive tackle, said. “What they are saying is to keep doing what I’m doing on the field, because I fit their style of defense almost perfectly. They just need me to show more academically, plain and simple.

“And I understand that after a rough sophomore year. I really didn’t take my academics seriously, but I’m off to a good start this year and have a lot of people helping me out on and off the field to help me with my needs, which is great. As the offers came in over the summer, I caught on to it quickly that I needed to be more serious and I finally understood what I had to. I have to take care of my priorities, because if I don’t I’m going to end up in a place I don’t want to.”

For Hall, the dream is to suit up for the Buckeyes. And he knows he’s got some work to do in order to make that a reality. This weekend he’ll visit Pittsburgh as he continues to expand his recruiting profile.

The Buckeyes are searching far and wide for offensive tackles to join their program, and on Monday night they extended an offer to one of the country’s best.

That is Tristan Leigh, a 4-star prospect ranked as the country’s 24th-best junior tackle. Leigh, from Robinson Secondary in Fairfax (Va.), added an offer from Florida on Tuesday. He has been on a roll lately and now has offers from LSU, Penn State, Virginia Tech and others to go along with the Buckeyes.

“[Ryan] Day,” the 6-foot-5, 270-pound Leigh told Lettermen Row when asked which coach extended the scholarship offer. “He seems like a great guy who loves his players for real. He said they didn’t offer me just to offer, but that he really wants me to be a Buckeye.”

Leigh will not wait long to make his first visit to Ohio State, a program he grew up watching closely.

“It’s big offer for me,” he said. “Because they have a great program. I’ve been watching them for a while. I’m going to visit for the Penn State game.”

One of the country’s top linebacker prospects has narrowed his options down to 10 schools.

Everybody Has Their Own Story , But You Wouldn’t Believe Mine … #TOP10 pic.twitter.com/MB01t7HOe3

Greg Penn, a 4-star junior prospect from DeMatha Catholic (Hyattsville, Md.) is the country’s sixth-ranked inside linebacker prospect and a player who has the attention of the Buckeyes.

Penn visited Ohio State over the summer, and the 6-foot-1, 230-pound linebacker has established a solid early relationship with Al Washington. The Buckeyes are only likely to sign one or two linebackers in 2021, and Penn is a player near the top of the list as a complement to recent commitment Reid Carrico.