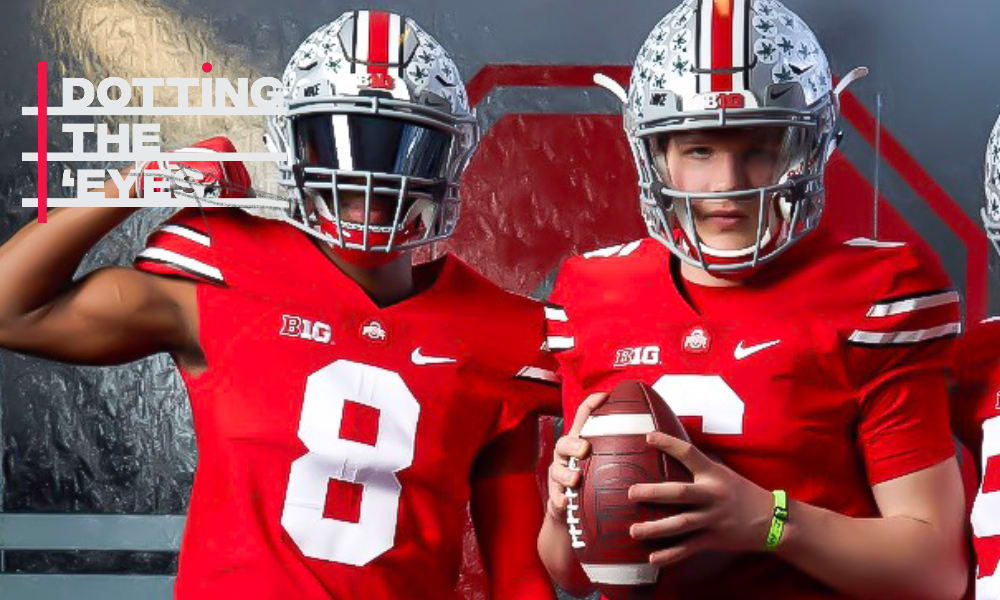 Stay in touch or be left out because Ohio State recruiting is a 24-hour, seven-day-per-week obsession. What’s the latest news as the Buckeyes build for the future? Get that and more Sunday through Thursday on Lettermen Row. Thursday’s notebooks has more insight into new commitment Marvin Harrison from the people that know him best and an update on junior defensive back Alijah Clark.

Ohio State added commitment No. 6 to its 2021 recruiting class on Thursday when Philadelphia 4-star receiver Marvin Harrison Jr. committed to the program over a slew of scholarship offers that were available to him.

Harrison opened up on his decision with Lettermen Row, but to really get a sense of what the Buckeyes are getting in this country’s eighth-ranked wideout, I asked two of the people who know him best: Ohio State commitment Kyle McCord, who plays with Harrison at St. Joseph’s Prep, and his head coach Tim Roken, who has worked with the young receiver for the last two seasons.

For McCord, the relationship with Harrison has been about much more than throwing touchdowns. A good receiver is always a quarterback’s best friend, and the Buckeyes verbal believes what makes his 6-foot-4, 185-pound partner-in-crime so good is that he has the ability to think like a quarterback himself.

”He has definitely helped my own development,” McCord told Lettermen Row. “I think we have really grown together as football players. It’s been a blessing to play in high school with him — and we’re still growing together. It’s nice to have a wide receiver who thinks like a quarterback.”

Roken, who led St. Joe’s Prep to a state title in the sophomore season for McCord and Harrison, agreed.

“They are each perfectionists in a way where if they take a rep and it’s incomplete or the timing is off, they either ask to take another rep or spend time after practice correcting the mistake,” Roken said. “They have a great relationship where if one of them isn’t having their best day, they encourage but also challenge each other to be better the next rep.”

Harrison’s demeanor is also one of complete calm in public. But on the field and in the weight room, that isn’t the case according to McCord.

”Marvin is a huge ‘lead by example’ type of guy,” McCord said. “You’ll never catch him doing the wrong thing, and he has the most experience in our wide receiver group. He’s a very hard worker on and off the field.

”He’s a lead by example guy first, but he will speak up when needed — especially among the guys in his position group.”

That’s just a natural part of the maturation process for a player capable of doing great things on the gridiron. There are steps taken nearly every day according to his coach.

“I think his comfort level grew throughout the season last year,” Roken said. “His work ethic and competitiveness showed in the weight room and made the guys in his group and around him better. He took the same approach when on the field in the spring and summer leading into this season.

“He’s consistently challenging himself to practice and play to a standard every day. His vocal leadership has grown as well, in coaching up the young guys on technique and assignment mistakes during practice or games. His overall engagement and comfort level has developed tremendously in the last year and a half.”

As mentioned in the breakdown of Harrison, Ohio State now has two receivers committed in 2020 and there are a trio of players remaining on the list who the Buckeyes are going to chase as hard as they can and hope to sign five receivers in the Class of 2021.

So, if those guys — Emeka Egbuka, Beaux Collins and Troy Stellato — are known commodities and top targets who all have a pretty strong chance of ending up in Columbus for college, then why the heck are the Buckeyes still offering 2021 receivers who aren’t named Egbuka, Collins or Stellato? On Monday night, Ohio State did that when they extended an offer to Maryland standout Kaden Prather, a 4-star athlete from Germantown’s Northwest High School.

Extremely blessed to receive an offer from The Ohio State University #GoBuckeyes🌰 pic.twitter.com/8I841oqE8D

No matter how confident a school feels in their chances with a recruit — or in this case, three recruits — there’s always a need to protect the best interest of the program by continuing to evaluate and offer other prospects who can play football at the level that Ohio State wants.

Prather is a big receiver — 6-foot-3 and 210-pounds — ranked right now as the No. 48 wideout in the country. He’s never been to Ohio State and the relationship there is just getting started. So, the Buckeyes are in no real danger of the 12th-ranked Maryland prospect attempting to commit anytime soon and subsequently throwing another wrench into their chase for the big three left on the recruiting board.

That said, Prather looks pretty good on film, so the evaluation and identification of talent is clearly going well for the Ohio State staff. He also plays defensive back

The Buckeyes welcomed Camden (N.J.) 3-star defensive back Alijah Clark to campus for their big home game against Wisconsin and made the defensive back feel right at home in Columbus.

”I really loved Ohio State,” Clark told Lettermen Row. “It was awesome how campus, all around it, was so family-oriented. There was a genuine love there for one another.

”Then there’s the game itself, and that was amazing. Where I’m from we don’t really have a professional team or big stadiums, so it was really motivating for me to see that place. It’s something that I got to take back home with me.”

The message for the 6-foot-2, 180-pound defensive back was simple: Keep working and maybe the chance to play for Ohio State will be there down the road. It’s very early in the evaluation process for most of the country’s juniors, and with Matt Barnes and Jeff Hafley already talking to Clark regularly, he’s in a good starting position with Ohio State.

“They told me to just keep going out there and doing what I’m doing,” Clark said. “On and off the field. If I do that, the offer could be coming in the near future.”