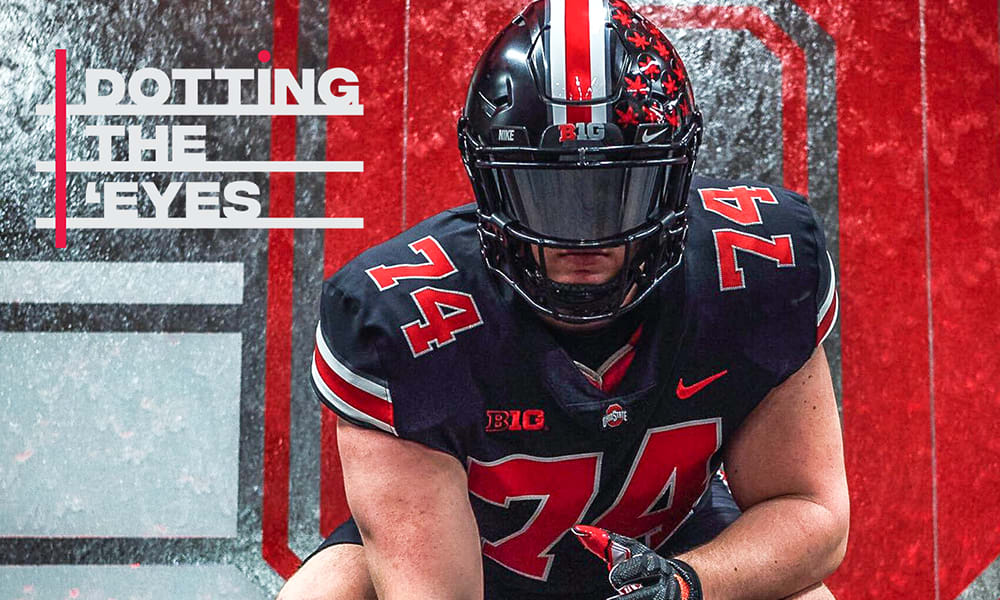 Luke Wypler is making an unofficial visit to Ohio State for his first ever college football game. (Luke Wypler/Twitter)

Stay in touch or be left out because Ohio State recruiting is a 24-hour, seven-day-per-week obsession. What’s the latest news as the Buckeyes build for the future? Get that and more Sunday through Thursday on Lettermen Row. The midweek notebook talks to Luke Wyper and C.J. Hicks about their upcoming visits to Ohio State, a visit that will be the first-ever college football game experience for each of both.

He’s been committed to Ohio State for more than a year, and he’s a top-100 prospect nationally regarded as the country’s top-overall center prospect in the Class of 2020. On the field, there’s not much Luke Wypler isn’t capable of doing, and off the field he’s certainly seen plenty as well. But this weekend, the 6-foot-4, 290-pound St. Joseph’s Regional (Montvale, N.J.) star will see something new — a college football game.

“I’m going back to Ohio State this weekend,” Wypler told Lettermen Row on Tuesday night. “It’s my first time to a game. Any college game. I may be the only national recruit that can say that.”

Wypler is making the visit with his father, who has never been to a college football game either. Wypler pointed out that it’s not as though he’s made a decision to miss games in the past, but that circumstances — namely his high school football games — haven’t afforded him the opportunity. He knows that makes him a bit unique, and he’s perfectly fine with that.

“I love being a little different,” New Jersey’s top-ranked 2020 prospect said. “It’s not like I waited, though, it’s just that my high school plays maybe one Friday night game a year and the rest are on Saturday afternoons. I just haven’t been able to visit.”

Wypler will arrive in Columbus on Friday morning. He was previously on campus over the June 14 weekend when he was in town for his official visit. That trip gave him a chance to get a bit closer to a pair of offensive linemen who also pride themselves on being a bit different: freshman Harry Miller and sophomore Nicholas Petit-Frere. He’s been close to Petit-Frere for a while now, and having those types of guys on the Ohio State roster are part of the reason he’s never looked back since making his college decision in the summer of 2018.

“Nick is one of my closest friends on the team,” Wypler said. “The day before I committed, me and him were on the phone for three hours. That’s when I decided to pull the trigger. [The people are] one of the things I immediately fell in love with at Ohio State.”

Ohio State: Luke Wypler focused on rehab, thrilled recruiting is behind him
Watch this video on YouTube.

While it’s kind of crazy that Wypler hasn’t ever been to a college football game before, it’s sort of understandable considering his location in New Jersey. There’s no real immediate draw for him or any kid growing up there to visit a place like Rutgers unless there are family ties. That’s not the case in Ohio where schools like Ohio State, Cincinnati, Miami and others are all within a short drive of Dayton. But C.J. Hicks, a top 25-player in the Class of 2022, will also see his first college game this weekend at Ohio Stadium.

Lettermen Row first introduced Hicks to readers in June, and now he’s getting his first chance to see the Buckeyes since catching their attention at a pair of one-day recruiting camps.

“I’m going to be watch and see how well the defense on both teams play,” the 6-foot-4, 190-pound Hicks told Lettermen Row. “They each have really good playmakers on offense, so it’ll be worth watching. I’m excited also just to see what it’s like at a college football game. I have never been to one ever.

“This is my first visit, so I’m excited.”

Hicks will travel to Columbus with a pair of Dayton-area stars. Kale Steneman, a 2020 prospect who plays quarterback at Alter, and Northmont (Clayton) 2021 standout receiver prospect Markus Allen will also be at the Horseshoe.

Ohio State added another name to its list of offered offensive lineman in the 2021 class earlier this week when David Davidkov announced he’d picked up a scholarship opportunity from the Buckeyes.

Blessed to receive an offer from The Ohio State University! #GoBucks pic.twitter.com/V4tqrrjnB3

The second-ranked junior prospect in Illinois, Davidkov is a 6-foot-6, 265-pound athlete who plays both sides of the ball for New Trier in Winnetka, a suburb north of Chicago. The Ohio State offer was the 18th scholarship for Davidkov, who also has LSU, Wisconsin and Penn State on his early list.

Davidkov is a talented and versatile athlete who has also wrestled and played rugby for the Trevians. This read by Mike Clark of the Chicago Sun-Times gives a bit more background on him and is worth checking out.