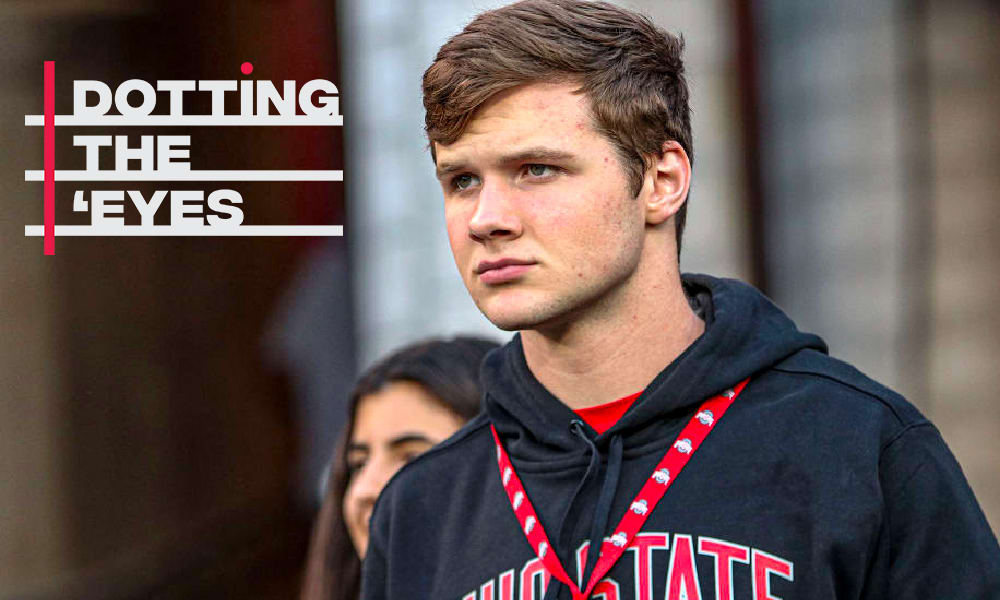 Kyle McCord received a healthy bump in the national rankings and is now a composite 5-star prospect. (Birm/Lettermen Row)

Stay in touch or be left out because Ohio State recruiting is a 24-hour, seven-day-per-week obsession. What’s the latest news as the Buckeyes build for the future? Get that and more Sunday through Thursday on Lettermen Row. Wednesday’s notebook has some major moves in the rankings for Ohio State commitments and touches bases with a pair of recruits who are hoping for an offer from the Buckeyes.

Ohio State commitment Kyle McCord is now a composite 5-star prospect and the country’s No. 4-ranked pro-style quarterback, thanks to a 37-spot bump in the 247Sports.com rankings on Wednesday morning. McCord is now the country’s No. 24-ranked prospect overall, and though he’s not really concerned with arbitrary ratings, the 6-foot-3, 205-pound quarterback is glad other people are recognizing his hard work.

“It’s pretty cool to finally be recognized as a 5-star,” McCord told Lettermen Row on Wednesday. “I’m not a big rankings guy at all, but it’s a blessing to see all my hard work start to pay off.”

The future Ohio State quarterback wasn’t the only program commit or target to see his composite ranking impacted by a big change from the folks at 247Sports. Here’s how the current crop of verbals fared following today’s ratings adjustment by way of their new composite ranking, followed by their updated 247Sports ranking. The star ranking listed is according to the composite ranking.

Donovan Jackson moved all the way up to the No. 8-ranked overall prospect according to 247Sports.com, but his composite ranking remains lower because ESPN’s rankings, still used in the composite ratings, have him down at No. 131.

A number of top Buckeyes targets also made big moves up the new rankings, which can be checked out here.

Lettermen Row has talked about Cincinnati La Salle defensive back Devonta Smith recently, and the communication between the 3-star cornerback and Kerry Coombs has continued.

“I try to text him every other day,” Smith said. “So we are talking very frequently, but I don’t want to bug him knowing how busy coaches are.”

Certainly Coombs, a Cincinnati legend, isn’t bothered by Smith. The two sides are building a good relationship, and that bond is one of the reasons why the 5-foot-11, 175-pound cornerback is optimistic that an Ohio State offer could be coming in his future.

“I feel like I’m close to getting the offer,” Smith said. “But if not, I’m just going to continue to work and lead my team to another state championship.”

Smith’s approach is one of patience, but he admits it’s a challenge waiting for “dream” offer from the Buckeyes while picking up scholarships from big-time programs like Oregon, Notre Dame, Penn State and others.

“It’s very hard being a kid from the state of the school and feel like I’m doing everything right,” Smith said. “I’m putting the work in, staying humble, keeping my grades top tier. It’s hard for sure. But I just know if it’s meant to be, it’ll happen. So, I try not to dwell on it.”

The next step for Smith and Ohio State is a March visit to campus.

Staying in Southwest Ohio and also waiting for a chance to earn a Buckeyes offer is wide receiver prospect Markus Allen from Northmont Clayton High School.

A 6-foot-2, 190-pound prospect, Allen has 13 scholarship offers — including a recent one from Michigan that turned his recruitment around a bit. Ohio State receivers coach Brian Hartline has been in contact with Allen after his 1,100-yard, 15-touchdown junior season.

“I’ve been talking to Coach Hartline,” Allen told Lettermen Row. “Ohio State likes me, and he wants me to come to a camp to see me live on the field. I didn’t camp with them last year.”

In-person evaluations are always the preferred method for the Buckeyes when it comes to in-state prospects. And if the state’s No. 37-ranked prospect wants a chance to play at Ohio State, that’s likely a step he’ll have to take. In the meantime, a spring visit is planned, and the development of the relationship with Hartline is the most important thing on the plate for Allen and the Buckeyes.

“I plan on visiting in the spring sometime,” he said. “I think Coach Hartline is a very good dude and coach.You can see he has coached some high-level wideouts at Ohio State. When he first approached me, he came off as a pretty laidback coach.

“He told me he liked my film and came off pretty cool, and ever since we have been staying in contact.”

There are no current favorites for Allen, who is looking forward to the next live recruiting period in order to begin organizing his options.