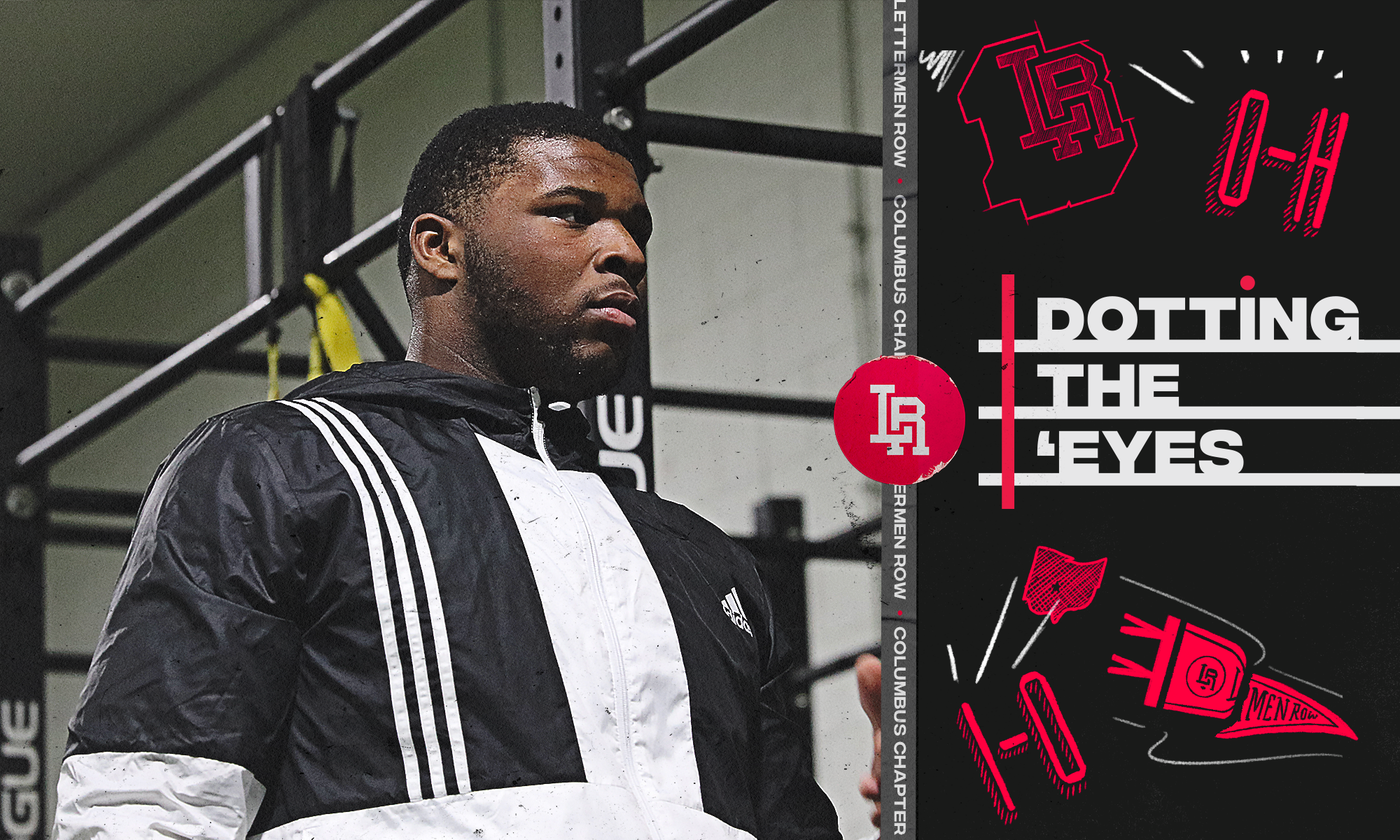 Kiyaunta Goodwin's recruitment has been all about relationships from the start. (Birm/Lettermen Row)

Stay in touch or be left out because Ohio State recruiting is a 24-hour, seven-day-per-week obsession. What’s the latest news as the Buckeyes build for the future? Get that and more Sunday through Thursday on Lettermen Row. Today we’re examining the buzz around Kiyaunta Goodwin, why Lettermen Row isn’t giving up on Henry To’oto’o and the Buckeyes yet and more.

Is time running out for Ohio State with Kiyaunta Goodwin?

There is a lot of guarded optimism that the NCAA dead period is finally coming to an end.

Since being implemented last March, Buckeyes targets all over the country have patiently waited for that to happen. Offensive lineman Kiyaunta Goodwin is among them — and is among the top priorities for Ohio State. Chris Vaughn, the legal guardian for the 6-foot-8, 310-pound tackle told Lettermen Row in late February he’d not make a commitment to any school he’d not visited.

That has been the status quo for Goodwin in the last few months. The dead-period discussion has been going on for months, too. Goodwin, like many other kids, has heard it was ending multiple times only to see the hope pulled out from under his feet. The concern that such a thing happens again is real.

And that may be leading to a decision in the near future for Goodwin. Perhaps before June when his next — and best —  chance for official visits resides. That may explain the recent rash of predictions from industry analysts for Goodwin to commit to Kentucky. The Wildcats are the program Lettermen Row believed was in the best position in February, and that hasn’t changed. It’s the one place he’s been the most and one school he has the best in-person relationships with at this point.

Only visits to other schools can change that. It’s just who Goodwin is: Relationships are the most important thing to him.

Ohio State, Alabama, Clemson and Michigan State are no doubt hoping Goodwin remains patient. The Buckeyes have been reluctant to schedule visits for prospects over the last year, not feeling confident in the dead period’s conclusion. They are scheduling them now, a sure signal that things are changing.

But are they changing too late for the Buckeyes and Kiyaunta Goodwin? These next handful of days and weeks are going to be vital for Ohio State if it wants to have a real opportunity to land the potential 5-star lineman.

It’s been about seven weeks since it seemed there was any strong chance for Ohio State to land Tennessee transfer Henry To’o To’o. The former freshman All-American linebacker’s father was quoted on 247Sports.com, going in-depth on his son’s interest in Alabama. It was a very strong opinion and the Crimson Tide became the clear-cut favorite to land the big-time transfer.

That hasn’t happened yet. To’o To’o is still waiting to pick his next stop while the SEC and the rest of college football sort out some key updates to transfer rules. Still, the expectation in the last two months has been that as soon as the SEC clears the way for immediate eligibility for in-conference transfer, he’d pick Alabama.

Maybe that’s what happens. Maybe it’s not. These last two months have no doubt given Ohio State ample opportunities to solidify its own blossoming relationship with To’o To’o, something that begun quickly after he entered the transfer portal. The Buckeyes have been in regular contact with the linebacker and his family, and the inexperienced depth chart in Columbus is no doubt appealing for a young player who wants a chance to compete in a top-level program with winning culture.

The Tennessee program lacked that last piece. It’s a clear factor in the next choice for Henry To’o To’o.

That choice, according to people in the know, is still being made. The Buckeyes are certainly not out of the running.

Last week, it was Tennessee’s Dallan Hayden who visited Ohio State. Right now, South Florida star Ryan Turner is doing the same. He arrived into Columbus on Thursday and will stay until Sunday. He’s in town with both of his parents, and it’s a key trip for the Buckeyes. Ohio State and Clemson have emerged as two of the top contenders for the 4-star cornerback, and he intends to head to South Carolina for a similar trip in the near future.

Turner, the country’s No. 33-ranked cornerback, is one of the top prospects on the 2022 board for Ohio State. He plays at Chaminade-Madonna Prep in Hollywood, Fla.

Cycling back to today’s first bullet point, the evidence that the dead period is likely to end is mounting up. The biggest piece of that so far is how Ohio State has begun scheduling official visits for this summer. The first weekend of June is already shaping up to be a big one for the Buckeyes.

All eleven of Ohio State’s 2022 commitments are discussing making that their official visit weekend. That’s why it’s so important that Xavier Nwankpa, Omari Abor and Nick James have already made similar plans. There will no doubt be many others trying to get to Columbus that weekend and throughout the month of June.

Time changes things, so I wouldn’t put anything in ink yet. But the sense that normalcy is returning — a little bit — is growing. Lettermen Row will have full updates on those big weekends as they draw closer.