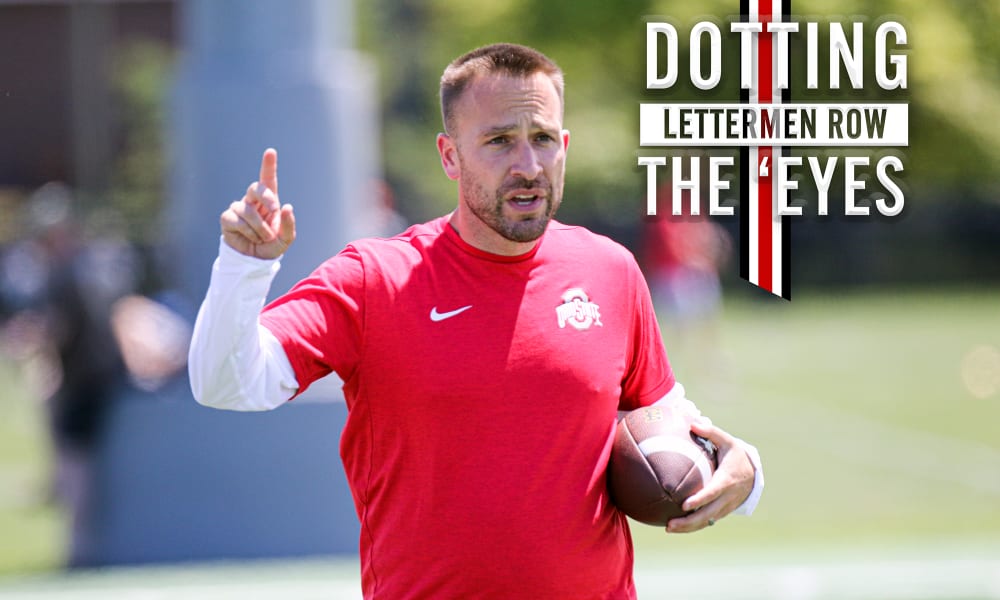 Stay in touch or be left out because Ohio State recruiting is a 24-hour, seven-day-per-week obsession. What’s the latest news as the Buckeyes build for the future? Get that and more Sunday through Thursday on Lettermen Row. Tonight’s update previews what is likely to an early defining weekend for Ryan Day’s tenure as the Buckeyes head coach.

It’s no secret by now: This weekend is a major recruiting event for Ohio State, and it’s a three-day stretch that could ultimately define Ryan Day’s first full recruiting class with the program. Heck, that might even the include the 2021 class for the Buckeyes as well.

And sometimes, on a weekend like this one, what you need is someone to take the party and turn up the volume right off the bat. There’s a very good chance that happens for the Ohio State on Friday afternoon when La Habra (Calif.) 4-star cornerback Clark Phillips III makes his college decision.

The announcement from Phillips is set for 3 p.m. Eastern. And though one of the weekend’s highlights with the closed-to-the-public barbecue bash will be over then, the expectation is that Ohio State will land the country’s fourth-ranked cornerback by that time. That is exactly the boost Ryan Day, Jeff Hafley and the rest of the Buckeyes coaching staff needs moving into the weekend.

So diving into the weekend a bit closer, let’s look at the first piece of the puzzle for the Buckeyes on the recruiting trail. Friday morning, hundreds of high school students ranging from rising sophomores through seniors will descend on Ohio Stadium for the first ever Buckeye Bash & BBQ.

This event, it appears, will replace Friday Night Lights for Ohio State this year. But it will not be open to the public or to the media that usually covers that event. So, for anybody expecting a blow-by-blow update from the event on Twitter or immediately following its conclusion on Lettermen Row, unfortunately that is not going to happen.

What is going to happen, though, is that a number of major Buckeyes targets are going to gather, play games, fraternize and get to know each other with the hopes of building relationships that will carry them to a real, solid foundation for the Class of 2021. That’s the group that this event is mostly aimed at, not the 2020 recruiting class — although some of the guys in town for that will certainly drop by as well.

Both Ohio State 2021 commitments, 5-star defensive end Jack Sawyer and 4-star quarterback Kyle McCord, will be on campus Friday. McCord will spend the entire weekend in Columbus and will not leave until Monday morning when he heads to Atlanta for the Rivals.com 5-star Challenge.

That duo will be tasked with playing the role of Pied Piper for the Buckeyes and will spend their time working on a number of big-time talents from around the country. Here are some of the names expected to be in attendance, understanding that lists change. Some folks we don’t know about will show up and some folks that we expect to be there, won’t be.

A few key names that won’t be in town for the event are Ohio prospects Najee Story and Reid Carrico, each of whom has a Buckeyes offer already. Story is out-of-town on a family vacation and Carrico is in Texas visiting the Longhorns for the first time.

Again, there will be a number of players who show up we don’t know about yet, so don’t be surprised when they pop up on social media with photos from Ohio Stadium.

Ohio State Class of 2020 will take shape this weekend

There are a lot of the country’s top 2020 prospects visiting Ohio State this weekend in an official capacity.

Here are the official visitors that have been publicized and that we’ve learned about. Again, the odds are that we’re going to be missing a name or two here, similar to how the official visit of Texas defensive back Chris Thompson slipped through the cracks last weekend.

That rather large group of talented soon-to-be seniors will be complemented by a number of Ohio State commitments and targets also in the Class of 2020 making unofficial visits to Columbus.

Based on this list, it’s clear why the weekend is so important to what the Buckeyes hope to accomplish in the 2020 recruiting cycle.

Who is on Ohio State commitment watch?

I said it earlier this week on Lettermen Live but I want to reiterate that I don’t gauge the Buckeyes success this weekend by the number of immediate commitments that are announced.

There are going to be a number of recruiting decisions that are made, in part, by the way this weekend goes. And with that in mind, I think there are a handful of recruits arriving on campus that will ultimately choose Ohio State. If I had access to the 247Sports.com crystal ball I’d be logging predictions for the Buckeyes.

Whether it’s by Monday or within a month or so, I think that the Buckeyes are close to locking up commitments from Clark Phillips, Cody Simon, Kourt Williams, Cameron Martinez, Joe Royer, Cam Large, Darrion Henry, Jaylan Knighton, Makari Paige, Ben Christman, Lorenzo Styles, Jayden Ballard and A.J. Kirk among this weekend’s visitors. I also think they will be the eventual winner of the Donovan Edwards sweepstakes, though that seems less likely to happen this summer.

That’d be a good haul from one weekend, right? Of course, I’m not making any guarantees. But as of where things are today, the Buckeyes could be on the verge of significant recruiting run across two recruiting classes.