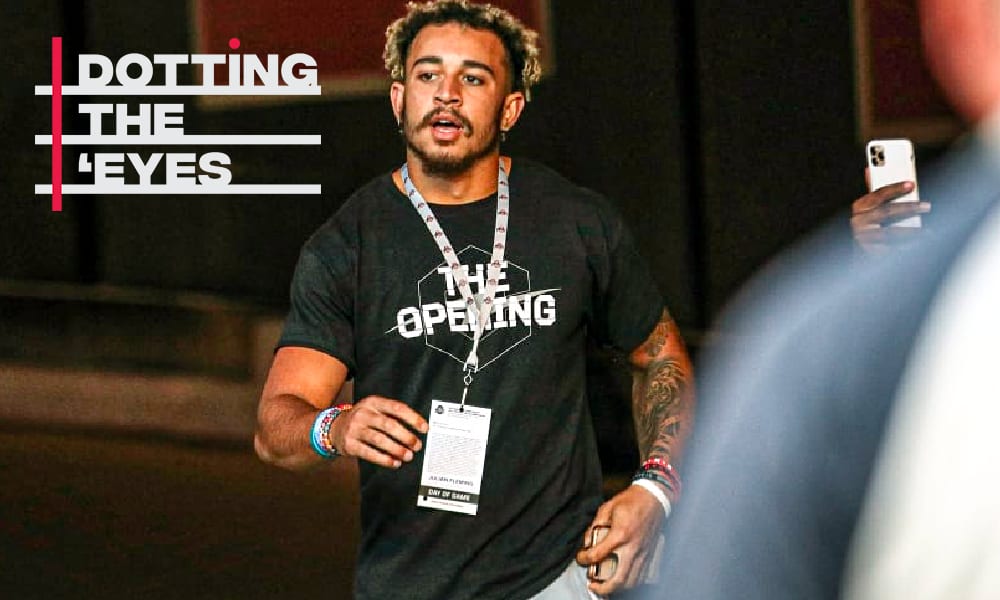 Julian Fleming is fighting against high-expectations but not running from them. (Birm/Lettermen Row)

Stay in touch or be left out because Ohio State recruiting is a 24-hour, seven-day-per-week obsession. What’s the latest news as the Buckeyes build for the future? Get that and more Sunday through Thursday on Lettermen Row. Tonight’s notebook has an update on Julian Fleming and checks in on the Buckeyes pursuit of 4-star running back Jahmyr Gibbs.

Julian Fleming focused on everything but rankings

Last week, ESPN adjusted its 2020 recruiting rankings, and in doing so the evaluators anointed a new prospect as the top-ranked player in this recruiting cycle.

It’s not altogether surprising that the 6-foot-3, 210-pound Fleming is getting that kind of love. His numbers are great, he’s got all the measurables a top prospect could have and he carries himself well, never getting too high or too low in his recruiting process.

In some way, he’s handled himself as a professional 00 and in doing so, Fleming has caught the attention of football’s biggest names. Check out this praise from Deion Sanders, who will coach the Buckeyes commit in his final high school game when he suits up for the Under Armour All-American Game in late December.

What I seen live at the @UAFootball future 50! Yes Lawd. This man is college ready day 1 Starter then 3 & done and then shaking my hand on stage at the @nfl draft. #Truth https://t.co/3IjBupjo62

Fleming is the country’s best receiver prospect beyond a shadow of a doubt, and he’s proved it at every turn. But playing for a run-heavy offense in Catawissa (Pa.), he’s just not going to be putting up huge receiving numbers week in and week out. What he is doing is getting a chance to develop in a way that most of the country’s top wideouts don’t get a chance to as a complete receiver.

For Fleming, the rankings are nice, but he’s not focused on them at all. Instead, he’s spending his time working toward another state championship — and understands that when he arrives at Ohio State in January that everything changes.

“It’s nice to see that stuff,” Fleming said. “But there’s a lot of work left before any of that can even start. It’s cool and it’s a great accomplishment, but all those stars and rankings are gone in two months.”

Troy Stellato has Ohio State on shortened list of schools

A week ago, we welcomed wide receiver Troy Stellato to Birminology on Lettermen Row and he talked about his relationship with Ohio State and how the offer from the program recently sent his recruitment into overdrive.

On Sunday night, Stellato narrowed his rapidly expanding list of options to a more manageable 12 schools. It’s not a surprise that Ohio State was on the list.

Still open to all schools but this is where my recruitment stands right now #blessed🙏🏻 @HypeSportsToons @JohnGarcia_Jr @SWiltfong247 pic.twitter.com/kQfBhtMno9

Clemson is next on the visit list for Stellato, who for now is a 3-star prospect according to the 247Sports.com composite rankings. It won’t be entirely surprising if his recruitment accelerates pretty rapidly from there, and his list could shrink to even smaller numbers in the near future.

He’s already been to Alabama and Ohio State this season.

There’s officially a new player in the recruitment of Dalton (Ga.) running back Jahmyr Gibbs: Alabama.

The Crimson Tide hosted the newly-minted 4-star running back and Georgia Tech commitment over the weekend. The visit to Tuscaloosa was capped off for Gibbs when Nick Saban’s program offered him a scholarship in their 2020 class.

Will Alabama’s bid upset the apple cart for Ohio State? Maybe, but there are things in play with the Crimson Tide that aren’t in play for the Buckeyes. First, there are already two tailbacks committed to Alabama. And while the SEC power hasn’t and won’t ever be shy about recruiting over a player already verballed, Alabama is also still very much in play for 5-star running back Zach Evans. He also spent Saturday with the Alabama staff as it knocked off Tennessee. It seems unlikely that Alabama, with Evans on the board, would push too hard for Gibbs at this point.

Regardless, the visit to Alabama is a sure sign that Gibbs is beginning to explore his list of expanding options, and it seems less and less likely that he’ll end up sticking with Georgia Tech.

Ohio State remains one of those options. And with Gibbs set to make his first visit to Columbus on Nov. 9 when the Buckeyes host Maryland, the efforts to get the fast-rising prospect out of the South are on the verge of getting interesting.

Why Ryan Watts flipped to Ohio State, how he builds bond with Buckeyes
Buckeyes will need to refill defensive line with big 2021 haul
Advertisement
Advertisement