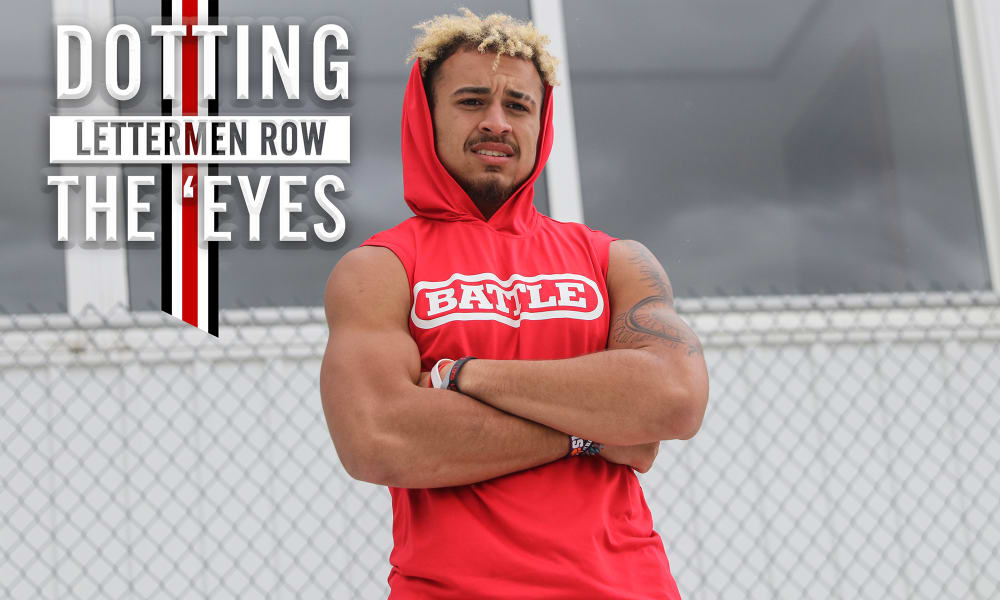 Julian Fleming showed at The Opening that he's one of the country's fastest prospects. (Birm/Lettermen Row)

Stay in touch or be left out because Ohio State recruiting is a 24-hour, seven-day-per-week obsession. What’s the latest news as the Buckeyes build for the future? Get that and more Sunday through Thursday on Lettermen Row. Today’s notebook has more on the Buckeyes at The Opening and gives final thoughts ahead of a Wednesday decision for linebacker Mitchell Melton.

The first day of competition at The Opening in Frisco, Texas was a showcase for the Buckeyes commitments on hand.

“(Tyree) is just quick as heck,” Fleming joked with Lettermen Row about his second-place finish.

Fleming’s official time on the day was a 4.44 in the 40-yard dash, helping him solidify his spot as one of the country’s most complete receivers and showing a next-level speed burst that he’s not really known for because he’s so well-rounded in the receiving game.

Gee Scott Jr. and Jaxon Smith-Njigba — a late addition to The Opening — also had a very good first day in Frisco. Each, along with Fleming and Buckeyes target Mookie Cooper, were included in a report by Greg Biggins of 247Sports.com as one of Monday’s best pass catchers. The future of the wide receiver position at Ohio State is very bright.

It wasn’t just the offensive players making a name for themselves, though. Recent Buckeyes commitment Cody Simon provided a little glimpse into what makes him so special by registering some incredibly impressive numbers in an off-the-cuff, unexpected workout session.

Ohio State commitments Paris Johnson and Jack Miller were each on hand as well, though neither participated in any events on Monday. Instead, each player was focused on enjoying the day’s activities and getting to know some of the players still being recruited by Ohio State.

The unofficial results of those efforts have been, to quote Miller, “great.” We’ll see how that plays out exactly over the course of the next few weeks but there’s real confidence amongst the Ohio State verbals in attendance that Mookie Cooper, Jaylan Knighton, Lathan Ransom and Kourt Williams are all leaning in the Buckeyes direction.

Though he’s not in Frisco, the Buckeyes are due to find out soon if the energy and effort put into the recruitment of Good Counsel (Olney, Md.) 3-star linebacker Mitchell Melton will pay off.

Melton, a 6-foot-4, 240-pound prospect who has deep family roots to the state of Ohio, will make his college decision on Wednesday and choose from a final three schools of Michigan, Notre Dame and Ohio State.

Maryland’s 19th-ranked 2020 prospect, Melton has visited all three of those top schools in an official capacity and did so during a three-week stretch of June, with both the Wolverines and the Irish reportedly feeling optimistic they’d be the choice for him at various points but sources that I’ve spoken to in Columbus about Melton for the last few months have never wavered in their belief that Ohio State was a much more serious contender to land him than it was being given credit for.

On Wednesday, the choice for Melton will come down to three key factors: development, academics and relationships. He talked about his decision and his recruitment with Lettermen Row two months ago and not much, other than the fact that his official visits have been completed, has changed.

We at Lettermen Row have thought for a while that Melton would end up in Ohio State’s class of 2020 and we still do.

It appears that Beech Grove (Ind.) 3-star offensive lineman Josh Fryar has a date set for his college decision and it could lead to some Independence Day fireworks for one school in the Big Ten.

With two days left before that announcement, Fryar’s 247Sports.com crystal ball is slanted very heavily in the Buckeyes direction (92 percent) and Ohio State was the team to most recently receive an official visit from the 6-foot-5, 300-pound line prospect.

Immediately following that official visit — which took place on June 21 — the feedback about Fryar’s interest was mixed but the tide turned quickly within days and rumors that a few key family members were each favoring different programs have dissipated and it now looks like things are in the Buckeyes favor.

We’ll see if that changes over the course of the next two days. Unless, of course, Fryar is just announcing whether or not he believes a hot dog is a sandwich.

A pair of recruits have dropped “narrowed school” lists in the last few days. The first, 4-star 2021 center Ryan Linthicum, who included Ohio State in his Top 8. He’s the country’s top-ranked rising-junior center and visited the Buckeyes in late May. He had plenty of good things to say after that trip.

“It was awesome,” he said. “I loved it. Just how passionate they are. They showed me the plan they have for me. It was a great first impression. They’re definitely in my top group.”

GODS PLAN…
Forever thankful and grateful for everything he has done for me and my family and the things he’s going to continuously do for me.
TMC🏁… pic.twitter.com/za2HwV3aQT

Banks is the country’s 14th-ranked linebacker and though he’s included Ohio State on the list, there’s been little contact between the two sides and I would not consider the Buckeyes a real threat in this recruitment.