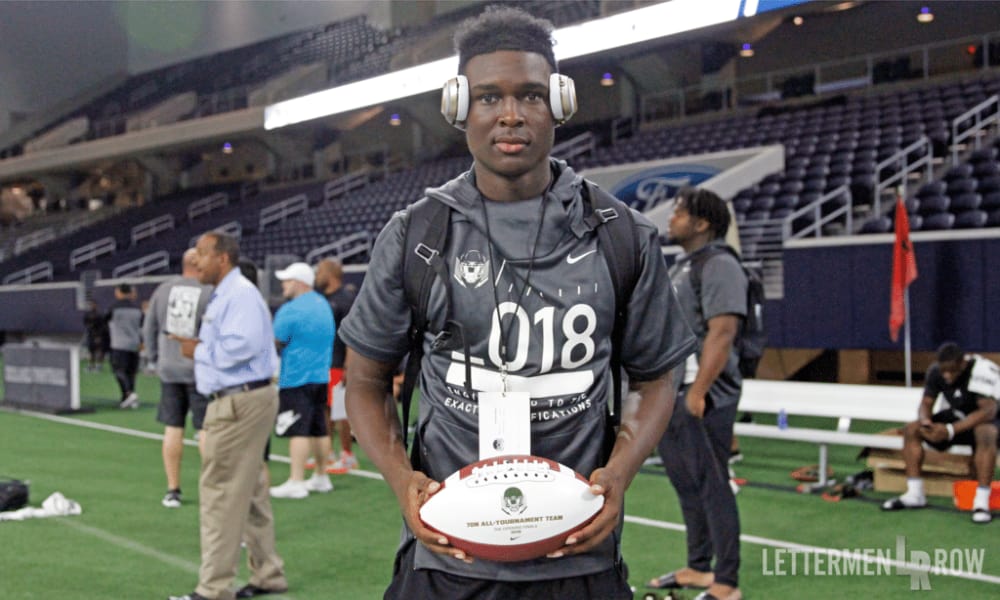 Jordan Battle was really good at The Opening in Dallas. (Birm/Lettermen Row)

Ohio State verbal Jordan Battle was one of four future Buckeyes taking part in The Opening in Dallas at the start of July, and he had a great week representing the program.

A 247Sports.com “dream team” member from the event, Battle talked with Lettermen Row about his experience in Dallas. As a recent Ohio State commit, he tried to get a little head start on recruiting other players.

“[The Opening] went well,” he said.  “I’m just here to ball out and have fun, to build some chemistry with players from all around the world. We’re going to build chemistry while we’re here and have a great camp. None of the coaches told me to ‘get anyone,’ but I’ve spent time talking to Elijah Higgins, the wide receiver.”

Battle committed to Ohio State just days before heading to Dallas. The commitment to the Buckeyes is still fresh in his mind, though he had no intention of actually pulling the trigger on a pledge during his trip.

“I wasn’t thinking about committing at all,” he said. “When I went up to Ohio State, it changed my mindset.”

For the 6-foot-1, 187-pound Battle, it was new Ohio State cornerbacks coach Taver Johnson that sealed the deal in his recruitment.

“I would like to thank Taver Johnson for the visit,” he said. “He took me around everywhere. He was like a father figure to me, he talked to us about some things, we met his family. He was really the reason why I committed there.”

There was a moment prior to that trip to Columbus when Battle, ranked as the country’s No. 12 safety, had considered a commitment to Miami. But his long-term affection for Ohio State won out in the end. He says he’s locked in with the Buckeyes and will sign in December.

“It started when they offered me,” he said. “Coach Meyer contacted my mom and my dad a lot — before he even contacted me. I could feel he wanted what was best for me, through them.

“Miami made a push, but obviously Ohio State beat them out. I’m completely shut down for now, until further notice. Right now, I’m locked in. I don’t think anything could change it with the way Ohio State is with me right now.”

Ohio State will give Battle his first college reps at cornerback, but he could make a big impact before he even arrives on campus if he’s able to help land a few other stars from St. Thomas Aquinas in Fort Lauderdale. He’s the next in a long line of Raiders heading to Columbus, and he’s begun working on the next wave already.

“Joey, Nick Bosa, they’re both great players, and Damon Arnette is a great player. He’s going to be good there this year. It’s just a great thing,” Battle said. “I talk to Derek Wingo and Marcus Rosemy, the wide receiver. I’m trying to get Rosemy to come up and see it. I told them the campus is beautiful, and if they want to major in business, that there’s a great business school there. I’ve told them about [safeties coach Alex] Grinch, and Rosemy about [Zach] Smith, since he works with receivers. Coach Smith is a cool guy.”

Battle says he’s hoping to make it to Columbus for a game this fall but has no other visits planned.

The Buckeyes 2020 recruiting class is rolling, and if things go well at the end of July, another key piece could fall into place.

That’s when Washington (D.C.) 4-star wide receiver Rakim Jarrett will visit Ohio State for the first time. Until then, Buckeyes fans will have to hold on to the news that Jarrett’s final four includes Ohio State.

That list was released on Sunday evening, and it’s pretty rare for any player with 18 months left in his recruitment to be narrowed down to just four schools. But it’s especially rare for a wide receiver to do that. That speaks to Jarrett’s place in the process, and if everything goes well during his campus visit when the recruiting dead period ends, he could quickly become commitment No. 6 for Ohio State in 2020.

Moving back to the Class of 2019 but staying at wide receiver, Austin, Texas 4-star prospect Elijah Higgins knocked out his Top-7 schools via Twitter on Sunday evening as well.

Not surprisingly, Ohio State made the cut. The Buckeyes hosted Higgins during an official visit over the June 22 weekend and have been a primary player in his recruitment since he first visited the school in April for the Ohio State spring game. And he didn’t mince words that national-championship aspirations are a big draw for him.

“[The interest is] mainly because of the relationship I have with the coaches and staff,” Higgins said. “And the fact that we’d be competing for a national championship.”

How would Higgins fit into that mission with Ohio State? The question from here is how he’s prioritized while the program is still trying to sort out how it sees his role in the offense while also trying to determine where they stand with two other top receivers in Marcus Washington and Jameson Williams. Because the numbers are important.

Ohio State will lose Terry McLaurin, Johnnie Dixon and Parris Campbell for sure, and it could also lose K.J. Hill following the 2018 season. So the Buckeyes need to weigh out exactly the number of guys they need to replace. But it does help to already have a five-star commitment from Garrett Wilson, and Higgins is hearing from him about the possibility of playing together.

Texas, Florida and Stanford are the big three to watch in this recruitment right now as competition for the Buckeyes.

Another top Texas DB has Ohio State on his list

But we won’t skip a list, no sir, not today. Here’s the Top 13 for 5-star cornerback Dwight McGlothern, who puts on the pads at the Trinity Christian School in Cedar Hill.

McGlothern has told Lettermen Row in the past that he’s not heard much from the Buckeyes, but they’re still on his list. Perhaps the 2020 standout will get more Ohio State attention when Sept. 1 rolls around and the recruiting contact rules loosen up for kids in his class. Until then, though, the Buckeyes are on his list because the program has a lot going for it.

“Ohio State is a great school,” McGlothern said. “They’ve got academics and sports going. Coach [Urban] Meyer is a great dude and knows how to win.

“I like this recruiting class so far. It is going to be very good for Ohio State.”

Who knew that the weekend would provide such a delicious assortment! To be clear, there has been some discernment here, because I am not including the Top 25 list provided by Texas 2020 running back Zachary Evans.

So, sorry but there’s just one more list for today.

Dawkins is a 6-foot-4, 235-pound weak-side defensive, and he’s visited Ohio State twice this year, including his most recent trip in early June. Though it’s hard to make out in that graphic, the other finalists are Notre Dame, Florida, Tennessee and North Carolina State. Dawkins is being recruited by Ohio State defensive line coach Larry Johnson. Why are the Buckeyes on his list?

“They’ve got great coaching there,” Dawkins told Lettermen Row. “I could have a great career there. They’re a great football school.”

The country’s 58th-ranked defensive end has offers from 21 schools. He talks to Johnson regularly and has no plan for a firm decision date.

“We talk a lot,” he said. “Pretty much every week. I’m going to decide whenever it feels right. It may sound basic, but I’m looking for the school that feels right.”

Ohio State has one defensive end committed, and though the Buckeyes are likely only going to take two with the hope that the second is 5-star Zach Harrison, the recruitment of Dawkins bears watching as the summer season turns to football season.