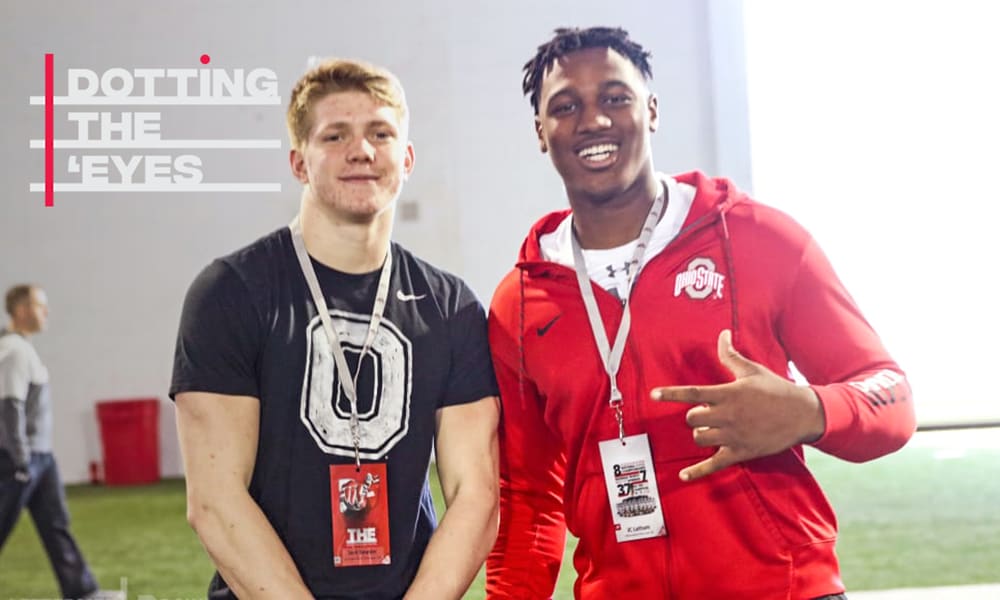 Stay in touch or be left out because Ohio State recruiting is a 24-hour, seven-day-per-week obsession. What’s the latest news as the Buckeyes build for the future? Get that and more Sunday through Thursday on Lettermen Row. Tuesday’s notebook opens up on a handful of new scholarship offers extended by Ohio State as the Buckeyes begin real 2021 evaluation.

The Buckeyes are active on the recruiting trail this week and have offered a pair of IMG Academy (Bradenton, Fla.) standouts — including offensive line prospect J.C. Latham, who visited Columbus in the spring and spent a lot of time with 5-star commitment Jack Sawyer.

A Mississippi native, Latham played football in Wisconsin before moving to IMG. And though he started his prep career as a defensive line prospect, the 6-foot-6, 275-pound athlete is being recruited by Ohio State as an offensive tackle. Unlike a large percentage of young players who are asked to consider that positional change, he’s not fighting it.

In fact, Latham made the move to offense just three weeks ago, but he has quickly become a legitimate prospect at the position.

There’s been a lot of smoke coming out of this offer, and Latham is definitely a real target to watch for the Buckeyes moving forward as a potential bookend with 2021 commitment Ben Christman. If things continue to develop between these two sides, there’s a definite possibility Latham leaves a planned November visit to Ohio State as a commit himself.

The Buckeyes also offered Ascenders 2022 running back Kaytron Allen. A Virginia native, Allen is a 5-foot-11, 195-pound back who has real interest in Ohio State and told Lettermen Row he’s trying to plan a visit to the school for some time in the near future as well. Michigan and Penn State have also offered among his early scholarship opportunities. He’s the second running back at IMG to earn a Buckeyes offer in the last three weeks, joining fellow tailback Lovasea Carroll, a 2021 prospect who recently decommitted from South Carolina.

Larry Johnson has long held a reputation as one of the country’s best defensive line coaches, and the genesis of that reputation was his time coaching in Maryland decades ago. Johnson’s legend still lives in the area, so it’s not surprising that whenever the Buckeyes offer a young prospect in that part of the country that there’s a slight sense of awe from the player when it happens — especially a defensive lineman.

A 6-foot-3, 270-pound defensive tackle prospect, Bradley called talking to Johnson and earning an offer from Ohio State quite a surprise.

“It’s definitely cool,” Bradley told Lettermen Row. “What Larry Johnson does at Ohio State is ridiculous. Look at all the guys he’s sending to the league. The offer definitely means a lot. Ohio State is one of the schools I grew up watching, so to check this one off as a scholarship is crazy.”

Bradley has been to campus at Ohio State before, and he’s hoping to return for another look at a place where he felt very comfortable.

“I’m definitely trying to get up to a game there,” he said. “I just have to contact Coach Johnson to see which one. I took a visit there last spring, and I loved it. The city of Columbus, I loved the vibe there. The Real Life Wednesdays Program was great, the facilities were beautiful and the love from Coach Johnson was great.”

Currently an unranked prospect, Bradley now has six scholarship offers. When he finds the right school, there will be no delay in ending his recruitment.

“Once I know a school is right for me, then I won’t wait at all,” Bradley said.

We’re going to round out today’s notebook by going over a handful of additional offers passed out by the Buckeyes coaching staff over the last few days.

I am blessed to say that I have received an offer from THE OHIO STATE UNIVERSITY ‼️ #GoBuckeyes @Coach_Yurcich @brianhartline pic.twitter.com/cgB0eNne9y

Jackson is a 6-foot-1, 175-pound wideout who is also a state qualifier in multiple track-and-field events. He has an early offer from Alabama as well.

He’s Michigan’s 17th-ranked player in the Class of 2021 but has an offer from Michigan already, so his ranking may not be caught up yet to his potential.

Speaking of potential, there may not be a defensive end in the junior class that has more of it than Landon Jackson, a 5-star Texas lineman offered by Ohio State on Monday.

The Texarkana native is the country’s second-ranked defensive end prospect and has a deadly first step to go along with a 6-foot-6, 240-pound frame. He’s got All-American potential coming out of Pleasant Grove.

Finally, a pair of cornerbacks in the Class of 2021 also picked up Ohio State offers this week. The first is Alabama commitment Latrell McCutchin, a 6-foot-1, 175-pound standout from Austin (Texas) LBJ High School. McCutchin is still garnering attention from big schools despite his commitment to the Crimson Tide and a torn ACL that will cost him his junior season.

McKinstry is the second-ranked cornerback in the country and a top-20 prospect nationally. The Buckeyes don’t usually fare well when recruiting the best of the best from Alabama. But with a talent like McKinstry, there’s no harm in extending the offer and seeing if Ohio State’s needs at cornerback will get them in the conversation.