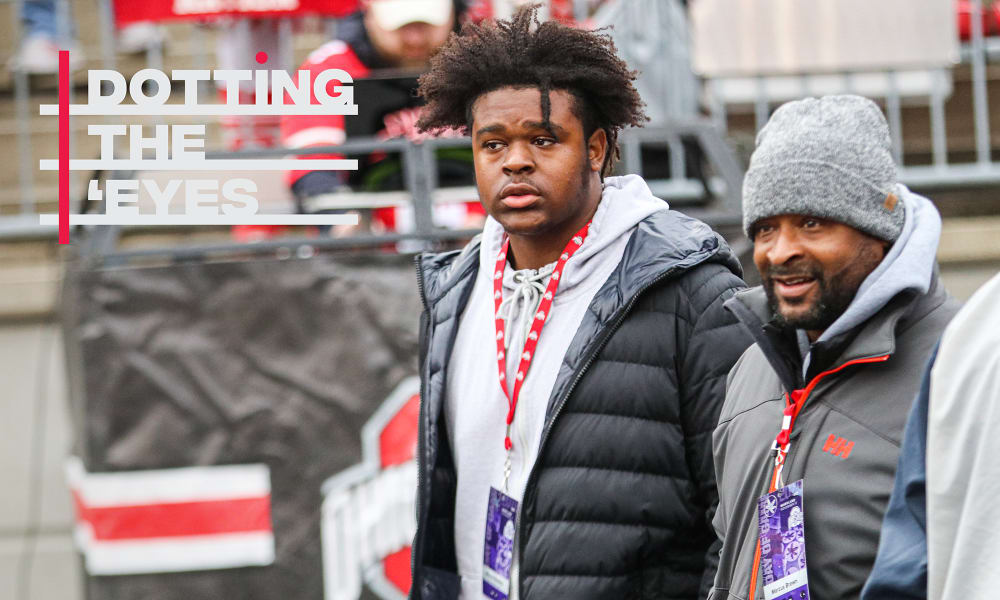 Stay in touch or be left out because Ohio State recruiting is a 24-hour, seven-day-per-week obsession. What’s the latest news as the Buckeyes build for the future? Get that and more Sunday through Thursday on Lettermen Row. Monday’s notebook gives the latest thoughts on running back priority Jahmyr Gibbs and updates the recruitment of defensive lineman Marcus Bradley.

Dalton (Ga.). running back Jahmyr Gibbs arrived at Ohio Stadium following kickoff as the Buckeyes took on Maryland this past Saturday. During the game, the 4-star prospect and Georgia Tech commitment sat next to Solon 2021 defensive end Najee Story, one of the few recruits in attendance who could challenge the 5-foot-11, 195-pound running back to a “Quiet Game” and actually have a chance to beat him.

Gibbs stayed in Columbus until Sunday afternoon before heading back to the Peach State to begin pondering the future as decision day looms for the Class of 2020 prospect. As one of the most important remaining Buckeyes targets in this cycle, Gibbs next set of steps will impact quite a few schools — but could also be impacted by a handful of players who are also being recruited to play running back by a trio of the SEC’s best programs.

The expectation is that Gibbs, the country’s ninth-ranked tailback according to 247Sports.com, will return to Columbus for an official visit. But there’s no date set, and that’s potentially telling.

First, Gibbs has an offer to Alabama. As of now, there is an official visit planned to Tuscaloosa just days before the early signing period begins. Alabama has two running backs committed and is still chasing Zach Evans, the top-ranked running back in the country and the guy who appears to be Nick Saban’s priority. If Evans ends up at LSU, where things seem to be heading in that recruitment right now, then the odds are higher that the Crimson Tide turn their full attention to Gibbs and that planned mid-December official visit.

Georgia is the program that has consistently been mentioned as the one Gibbs wants. But according to sources in the southeast, the Bulldogs are unlikely to make a move on Gibbs until they’re convinced that Don Cheney, Jr., a 4-star tailback committed to Miami, is no longer an option. Georgia has 5-star running back Kendall Milton committed, but Gibbs may just want to stay close to home and play between the hedges.

Staying home and playing for Georgia Tech, the school he’s been committed to since April, remains a very viable option for Gibbs. But clearly the Buckeyes would be considered the odds-on favorite if this recruitment shakes down to a head-to-head battle between them and the Yellow Jackets.

That said, it only becomes that kind of matchup if Alabama and Georgia continue to prioritize other backs ahead of Gibbs, giving Ohio State a chance to convince him the best chance of playing big-time college football is a little further from home than he’d like.

There’s no consensus right now as to the likeliest outcome with Gibbs. But if I were forced to handicap the recruitment from here, I’d still have the Buckeyes in the trail position behind Alabama and Georgia, but I don’t think it’d be wise to completely dismiss the chances of staying committed to Georgia Tech. The belief is that Gibbs would absolutely prefer to stay closer to home for college.

Maryland defensive lineman has Ohio State at top of list

Quince Orchard (Gaithersburg, Md.) 2021 defensive tackle Marcus Bradley visited Ohio State in the spring and returned to Columbus for a second time when it hosted his home-state Big Ten program over the weekend.

Bradley has offers from Florida, Penn State, Texas A&M, Virginia and others — including the Buckeyes. But he is currently unranked in the national recruiting rankings. That hasn’t stopped him from being seen by a number of the country’s premier coaches, including Larry Johnson, who he talked with following the game on Saturday.

“Larry Johnson said he’d like to coach me and make me great,” Bradley said. “I love everything he preached. His defensive line is polished. Their technique is wonderful.

Virginia is another of the primary contenders for Bradley right now, and he’ll be back at Ohio State again as soon as he’s able. Bradford is a teammate of another big-time Buckeyes target: 2021 defensive end Demeioun Robinson. Robinson will visit Ohio State in two weeks when it takes on Penn State.

On Sunday, Knoxville (Tenn.) Catholic defensive end Tyler Baron announced on Twitter that he may be closer to making his college decision.

I think I’ve made my decision 🤫

That tweet came about 18 hours after two of his top choices — Tennessee and Kentucky — battled to the wire in a battle of middle-of-the-road SEC programs. The Volunteers won that game and appear to have, in some ways, righted what looked to be a sinking ship, and early-season talk about a coaching staff change there in Knoxville has waned.

That would be especially important for Baron, whose father is a member of the Volunteers recruiting staff. And it could be an indicator as to what direction the 6-foot-4, 255-pounder is leaning.

Ohio State hosted Baron for an official visit in early October, and an announcement was expected toward the end of last month but never came to fruition. Though the tweet above suggests a decision has been made, Baron is still planning to wait a bit before making any public announcement.

“Probably on Signing Day,” he told Lettermen Row on Monday when asked if he had a plan to take his choice public.

If it’s not Ohio State for Tyler Baron right now, there’s at least some time left to change his mind.