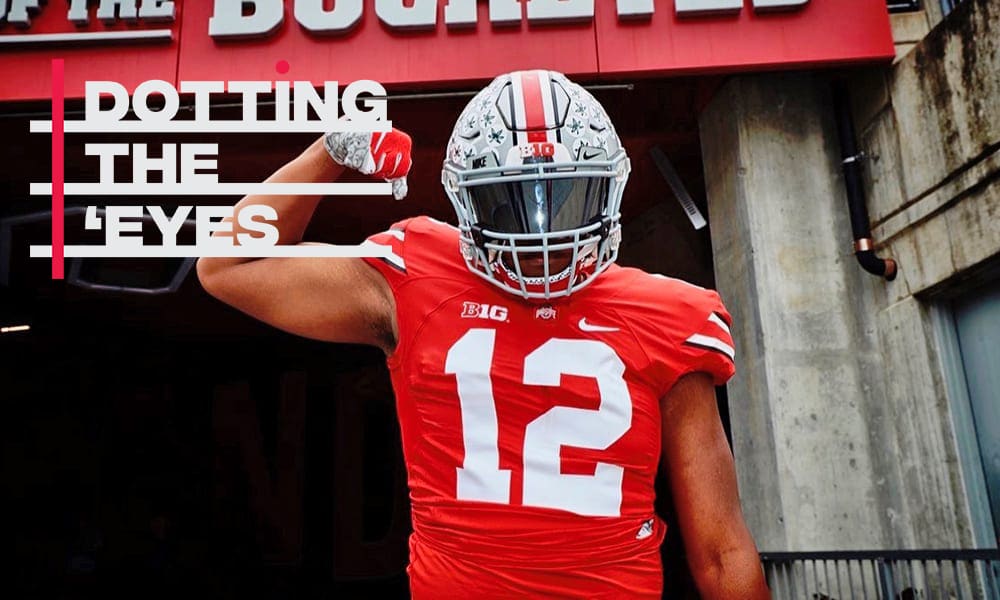 Stay in touch or be left out because Ohio State recruiting is a 24-hour, seven-day-per-week obsession. What’s the latest news as the Buckeyes build for the future? Get that and more Sunday through Thursday on Lettermen Row. Thursday’s edition has insight into the decision date for defensive lineman Jacolbe Cowan and talks with Ohio State commitment Lejond Cavazos who will return to Columbus soon.

Ohio State defensive line target Jacolbe Cowan, the country’s 15th-ranked defensive tackle prospect according to the 247Sports.com composite rankings, announced on Wednesday night that he has made a decision on his college future and is set to announce it next week.

The time has finally come! 🙏🏽

I will be announcing my college decision on Friday, October 4th.

A 6-foot-5, 275-pound lineman, Cowan has made three different visits to Ohio State — including an official visit in June. And he has been in regular contact with the Buckeyes and defensive line coach Larry Johnson for much of the last year, as well as Ryan Day recently. Cowan is a player who fits a mold Johnson covets for his linemen: Big and athletic.

Though Cowan will be deciding between a final group of 12 schools — a group he announced back in February — common thought is that the group of real finalists is much smaller. Ohio State, Tennessee and North Carolina have to be considered the top tier in that group ,and the Buckeyes have built their relationship with Cowan as long or longer than any other program recruiting him.

Ohio State wants another defensive lineman in its Class of 2020, and it’s my belief that it would actually prefer two. So, the timing of this announcement from Cowan is interesting, but doesn’t necessarily mean the Buckeyes would be done at the position if he were to commit to them.

Tennessee 4-star defensive end prospect Tyler Baron is making is slated to make an official visit to Columbus just hours after Cowan’s decision, and I believe there would be room for both players in the Buckeyes class. So, there’s no need to look for some sort of signal about which way Cowan is leaning based on Baron following through with his visit.

Hang tight, because I think the timing of this decision bodes well for Ohio State as he’s eschewed other official visits to this point and that was not the original plan for Cowan.

He’s always been one of the country’s fastest football prospects, but a few games into his senior season at the IMG Academy (Bradenton, Fla.), Buckeyes commitment Lejond Cavazos is proving to himself and others that he can a top-tier cornerback.

The move from safety to cornerback may not seem to be that large of a transition, but it is vastly different on the football field. Cavazos, who missed most of his junior season with a hip injury, has been getting some help from Ohio State defensive coordinator Jeff Hafley, who has been able to evaluate the 6-foot-1, 195-pound senior.

“[Hafley] has been helping me with stuff I need to work on,” Cavazos said. “Other than that, he’s loving what he’s seeing. He said he likes how comfortable and confident I am with this being my first season playing the position.”

Hafley and the rest of the coaching staff will get a chance to applaud Cavazos in person when he heads back to Ohio State for the game against Michigan State next week.

“I’ll be up there next weekend for the Michigan State,” he said. “It’s an unofficial visit, and I’ll be there with Julian Fleming. I’m taking my official visit for the Penn State game.”

In Wednesday’s edition of Dotting the ‘Eyes, we mentioned a pair of Texas prospects with Buckeyes interest. Included in that pair was defensive lineman Tunmise Adeleye, who told us that he and some fellow Texans have had discussions about all leaving the Lone Star State together for college. One of those players was Katy (Texas) High School cornerback Hunter Washington, who visited Columbus in June with Adeleye and plays for nearby Tompkins High School.

Washington, the country’s 18th-ranked 2021 cornerback, believes he’ll be back at Ohio State for the game against Michigan State. The 5-foot-11, 180-pound defensive back has been in contact with Day and Hafley leading up to a visit.

“I talked to [Ryan] Day and Jeff Hafley on Monday night,” Washington told Lettermen Row. “Coach Day was just checking up on me and my family, seeing how things are and seeing when I’m coming back to Ohio. I think I am coming up next weekend.

“Coach Hafley was also checking up on me saying that I been looking good on the field. He also wants to see me again. Plus, he was checking up on everyone in my family seeing if things were on track.”

Things are on track for Washington, who has almost a dozen early offers. He knows what boxes he needs a potential landing spot to check off and will be looking to find some of those things in Columbus.

“It’s academics first,” Washington said. “I want to see what they do to keep the players on track in the classroom and what kind of help they give to the players.

“After that, it’s how it is around the school, the atmosphere. Seeing if I’m comfortable. Could it feel like home? It’s not just what they do on the field, but off the field and in the training room. That’s the biggest thing. What do they do to help the players stay healthy? Then it’s about coaches and players and stuff like that.”