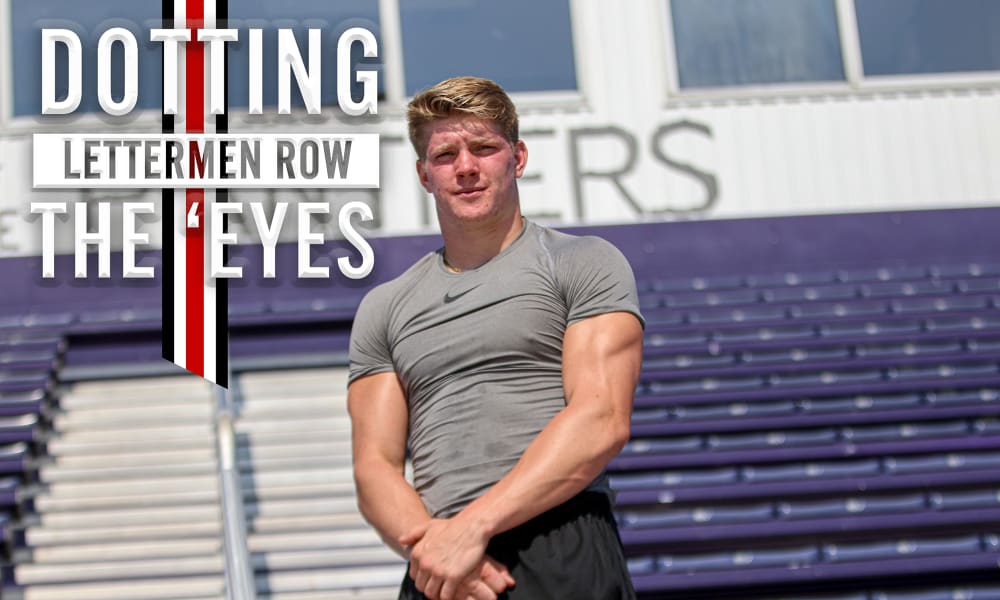 Jack Sawyer is eager to bring Ohio's best linebacker to Ohio State with him. (Birm/Lettermen Row)

Stay in touch or be left out because Ohio State recruiting is a 24-hour, seven-day-per-week obsession. What’s the latest news as the Buckeyes build for the future? Get that and more Sunday through Thursday on Lettermen Row. Today’s notebook talks with the country’s top-ranked 2021 prospect, Jack Sawyer, and checks in on a pair of Buckeyes targets from coast-to-coast.

That’s why Jack Sawyer, the young commitment from Pickerington North High School, is among the country’s most dominant football prospects, a preseason All-American and a player being counted on by his future coaches to help recruit the best-of-the-best from around the nation to join him at Ohio State.

Sawyer, 6-foot-5 and 235-pounds, has his targets. They’ve been given to him by the people behind the scenes in Columbus.

“Reid Carrico,” Sawyer told Lettermen Row on Monday. “I think he’s the best linebacker in the country, and I want to play with him.”

Sawyer believes the battle for Carrico comes down to Ohio State or Clemson. Beyond the state of Ohio’s top-ranked linebacker prospect, he has his eye on a pair of big fish: Landon Tengwall and Damon Payne.

“The lineman, I think he’s from Maryland,” Sawyer said. “Tengwall. I know Kyle McCord is working on him, too. But we’d really like to get him here for a visit. Then there’s that Payne guy from [Michigan], he’s a really good player that I’d like to have with me on the defensive line.”

Sawyer, who in the video below also mentioned Washington 5-star athlete Emeka Egbuka as a top target, has decided against doing the big national camp circuit. That is because he’d rather spend his offseason working with Larry Johnson. But it will be interesting to see if the Ohio State coaching staff pushes him to get involved in those events because of the potential recruiting benefit that comes from putting Sawyer around his peers. Sometimes recruiting face-to-face is a much more natural method than working on other players over social media and via text message.

Ohio State continues to get familiar with Xavier Carlton

The Buckeyes are working to add another defensive lineman or two in the Class of 2020, and over the past few months one player that Larry Johnson has spent time getting to know is Draper (Utah) Juan Diego Catholic defensive end Xavier Carlton.

Ohio State offered Carlton, who transferred from Southern California to Utah over the offseason, in May and followed up that verbal offer with a written one last week.

A 4-star prospect ranked as Utah’s second-best player in 2020, Carlton has not yet been to Ohio. But he’s hearing from Larry Johnson regularly and is expecting to count Ohio State as one of his official visits this fall.

“Yes sir, we’ve been talking, it’s been consistent,” Carlton, 6-foot-7 and 262 pounds, told Lettermen Row. “I am planning on visiting there in late fall.”

Carlton has offers from 30 different schools and to this point has taken his recruitment slower than most. Family issues kept him from getting on the road over the summer, and because of that he’s planning on making a January decision and signing with the school he chooses in February.

After months of talking to Tony Alford in small increments, North Carolina running back Evan Pryor is eager for Sept. 1 to arrive. That’s the day that Alford and college football coaches all over the country can begin contacting him directly.

The contact between Pryor and the Buckeyes has stayed consistent over the last few months. But things are going to change in a few weeks. That change has been precipitated by the June trip to Columbus that the 5-foot-10, 190-pound back took, his first time at Ohio State.

It will not be his last visit if he can help it.

“I think we really enjoy talking to each other,” Pryor said of Alford. “I’ll probably be up there for the game against Penn State. He’s just giving me the same message. He tells me to keep grinding and that he hopes one day I’ll choose Columbus as my home.”