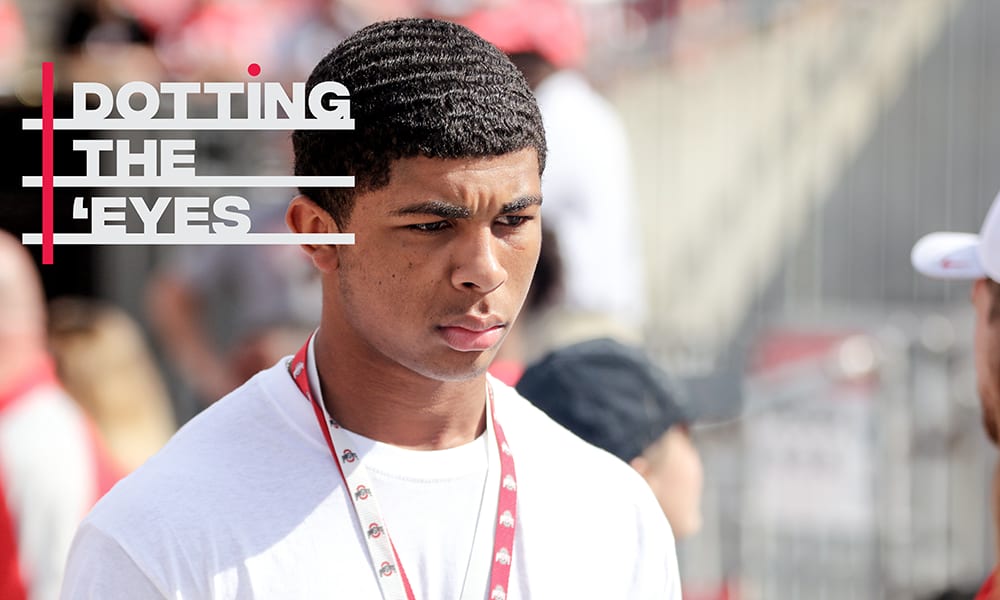 Lorenzo Styles continues to be a major target for Ohio State but his decision has complex layers to it. (Birm/Lettermen Row)

Stay in touch or be left out because Ohio State recruiting is a 24-hour, seven-day-per-week obsession. What’s the latest news as the Buckeyes build for the future? Get that and more Sunday through Thursday on Lettermen Row. Sunday’s notebook catches up on the Buckeyes commitments after a weekend of high school football action and more.

One of the more intriguing 2021 prospects as it pertains to Ohio State and its recruiting efforts is the recruitment of Pickerington (Ohio) Central 4-star Lorenzo Styles.

In the past here on Lettermen Row, we’ve written about Styles and how Ohio’s fourth-ranked junior player provides some unique challenges because — despite his Buckeyes roots — the debate about what position his best future is at rages on.

Some believe the 6-foot-1, 170-pound athlete’s best fit is at wide receiver. Others believe he’s better suited to play defensive back. For a while now, Styles was resistant to the idea of playing defense but he appears to be, at the very least, softening on that stance.

“I would be more comfortable with wide receiver,” Styles told Lettermen Row recently. “But, sometimes what you want is not God’s plan for you. I’m just going to follow the course.

“A lot of schools have been approaching for defensive back.”

The 247Sports.com crystal ball for Styles is still 80-percent in the Buckeyes favor but momentum seems to be trending in the direction of Notre Dame in recent weeks, and a lot of that momentum is presumably a result of the Irish making no bones about it: they want him at wide receiver. Styles does really like Notre Dame but there are a handful of schools on his short list he says he needs to visit before breaking things down any further.

“I’m really trying to get to LSU, Florida, Auburn, etc.,” Styles added. “Sept. 1 helped some other teams get into the mix.”

With Jayden Ballard committed already in 2021 and with top targets like Emeka Egbuka and Beaux Collins very much in the mix for 2021, Brian Hartline and his position group may not have a lot of room. If Styles decides that he’s willing to dive into a future on defense, it could help clear the path for him to follow his father’s footsteps and suit up for Ohio State.

From the department of unexpected changes: Jack Sawyer, the country’s top-ranked 2021 prospect and a 5-star defensive end, is now playing quarterback for Pickerington (Ohio) North.

Yes, you read that correctly.

As you can see, the 6-foot-5, 240-pound Sawyer was running a lot of quarterback power and plays like it — and occasionally struggled with the shotgun snap — but he also showed an ability to throw the ball on time when needed. The decision to move him to quarterback comes as a result of the Panthers offensive struggles through the first two weeks of the year.

“I just want us to win so I’ll do whatever it takes,” Sawyer told Lettermen Row following his four-touchdown night. “Our starter kind of got hurt and he’s a really good safety who converted to quarterback this season. I think my coaches are going to keep me there this year so we can get some wins, and then still put me in on defense on passing downs.”

High school coaches have a difficult balance to strike between what’s in the best interest of their player’s development and what’s best to help their program win games. Moving the country’s best prospect from his natural position to quarterback doesn’t seem like something you’d normally do but Sawyer isn’t normal.

“I only played eight defensive snaps on Friday,” he said. “It’s a good chance to show off my athleticism.”

Staying with the Class of 2021, Ohio State quarterback commitment Kyle McCord fought valiantly but he and his St. Joseph’s (Philadelphia) Prep teammates fell short against the IMG Academy on Friday night. The Hawks battled but lost to the Ascenders 31-25.

The game was held at Rutgers and with McCord, Marvin Harrison Jr., Jeremiah Trotter Jr., Elias Ricks, Lejond Cavazos and many more Division 1 prospects on the field, the contest proved to be quite a fight.

“Friday night was a tough loss,” McCord told Lettermen Row. “We just have to take it and learn from it as a lesson. We won’t see a team better than them so now we just keep moving forward as a team. We didn’t play our best game, and there’s a lot of room for improvement everywhere.

“That’s why I’m so excited. We never quit and we kept fighting, so I’m proud of my guys.”

“Coach Yurcich said I played well. I moved very well in the pocket and that I was tough for getting up after some of the hits I took,” McCord said of the message from his future position coach. “He said he thought it would be beneficial to us if I was to get out of the pocket and throw on the run more.”

Of course, McCord wasn’t the only Buckeyes commitment on the field and said he did talk to IMG cornerback Lejond Cavazos. Cavazos and his teammate, 5-star Ohio State target Elias Ricks, were tasked with guarding 2021 Buckeyes target Marvin Harrison, a player that many feel will also end up at Ohio State.

“Marvin and Elias were going at it all game,” McCord said. “I told Lejond that’s how it’s going to be at practice for the next few years.”