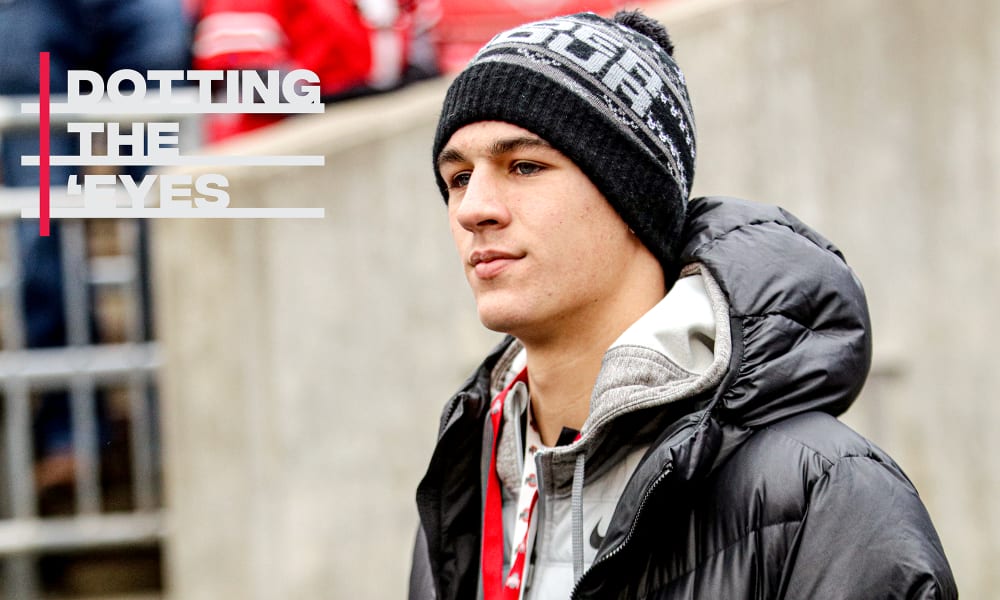 Brady Allen has been on the Ohio State radar for almost a year already and has two years of high school football left. (Birm/Lettermen Row)

Ohio State didn’t use the game against Maryland as a major recruiting weekend, but there were a number of intriguing prospects in attendance. One of them was Brady Allen, a 2022 quarterback from Gibson Southern in Fort Branch, Ind.

Allen, 6-foot-5, 200-pound sophomore, has been a pretty regular guest at Ohio State in the last year, visiting on multiple occasions as Ryan Day, Mike Yurcich and Kevin Wilson continue to evaluate him for a potential scholarship offer. On Saturday, he made his way over to Columbus and arrived early enough to spend some quality time with the Buckeyes coaches. He also left the game early enough to squeeze in a game-day visit to Cincinnati later in the afternoon as well.

“It was a really good visit,” Allen told Lettermen Row. “I talked with Coach Wilson and [Corey] Dennis before the game, but we left early because we were trying to catch a game at Cincinnati, too.

“It was great to be back. I got to experience a lot, just like I did last year. It was really cool to watch the amount of talent that was on the field for Ohio State.”

Allen, who finished his sophomore year completing 62 percent of his pass attempts for 2,545 yards with 31 touchdowns and eight interceptions, has four early offers. That list that includes Cincinnati, Virginia Tech, Purdue and Indiana, but he’s been hearing regularly from regional powers like the Buckeyes.

“Notre Dame and Iowa came in and visited me in the spring,” Allen said. “I’ve been up to Michigan State a few times, and I’m starting to hear from some other places too. I’m enjoying this process. Every day I’m trying to work hard at every aspect of my game, so I’m not getting caught up in the offers I don’t have. I’m just really excited about the offers I do have.

“[Ohio State] says they want me to keep calling them.”

If the Buckeyes are interested in Allen, they may need to make a move in his recruitment sooner rather than later. Like a lot of young quarterbacks, a decision is possible before his junior season kicks off.

“You see a lot of quarterbacks making a decision between their sophomore and junior year,” Allen said. “I’ve been talking with my parents about it, and it could be as early as this spring if I feel like it’s right.”

The Buckeyes top-ranked 2021 commitment — and one of the country’s premier junior prospects — suffered a torn MCL in his left knee on Friday night and will require surgery to repair it.

Just want to say thank you to everyone who has had me in their thoughts and wishing me well. I will have my MCL surgically repaired sometime this week. If I could go back and relive it the same way I 100% would without a doubt. I’m going to come back stronger then ever. Thank you https://t.co/s2e7yTtUKR

The injury occurred while the 6-foot-5, 240-pound Pickerington North star was lined up at quarterback, a position he’s played this season for the Panthers because that’s what his team needed him to do this season.

“I just want us to win, so I’ll do whatever it takes,” Sawyer told Lettermen Row when his position shift happened in September. “Our starter kind of got hurt, and he’s a really good safety who converted to quarterback this season. I think my coaches are going to keep me there this year so we can get some wins, and then still put me in on defense on passing downs.”

Sawyer’s upcoming surgery will avoid some of the major complications that often accompany knee injuries and that should allow for a complete recovery but he will miss his upcoming basketball season at Pickerington North.

Ohio State offered Solon defensive end Najee Story back in the spring, but his recruitment has been pretty quiet since then. That’s Story’s story, I guess, since the 6-foot-4, 24o-pound junior chooses to be under-the-radar for the most part.

The country’s 11th-ranked strongside defensive end in the 2021 class was in Columbus on Saturday and watched the Buckeyes play for the first time in Ohio Stadium.

“It was great,” Story told Lettermen Row. “It was my first time in The ‘Shoe for a game, and I loved it. We showed up a little late, but I talked to [Ohio State staff member] Ed Terwilliger and [director of player personnel Mark] Pantoni at halftime.”

Story didn’t stay for any postgame conversations with the Ohio State coaching staff, but this trip was really about experiencing a game day with the Buckeyes. He’s stayed in regular contact with Ryan Day and Larry Johnson since the start of September and liked what he saw as those two and the rest of Ohio State staff handled in-game moments.

“Their defense was outstanding, and the defensive line dominated from the start,” Story said. “Both the defensive line and the rest of the defense stepped up in the absence of Chase Young, and that was huge. Their whole defense has great depth and talent, and I knew that there would be no problem.

“But 73-14? I loved the atmosphere and how much the fans were in it. I could see the coaches talking to the players on the sideline and teaching them as well.”

Following LSU’s big win over Alabama, 5-star cornerback Elias Ricks took to Twitter and announced he was “officially” shutting down his recruitment.

I have officially shut down my recruitment , We are the best ever. #GeauxTigers🐅

Ricks, of course, has been committed to LSU since last Christmas. But he has routinely mentioned that two other schools — Ohio State and Alabama — would still receive an official visit from him before December’s signing day.

Does this proclamation mean Ricks isn’t going to take a visit to Columbus in two weeks for the Penn State game as he’s planned for the last six months? It seems like it, but it won’t be a huge surprise if he still makes the trek north for that huge Big Ten matchup. However, visit or not, the odds have always been very low that Ricks would end up anywhere other than LSU. The continued success in Baton Rouge has taken those odds from slim down to almost none.