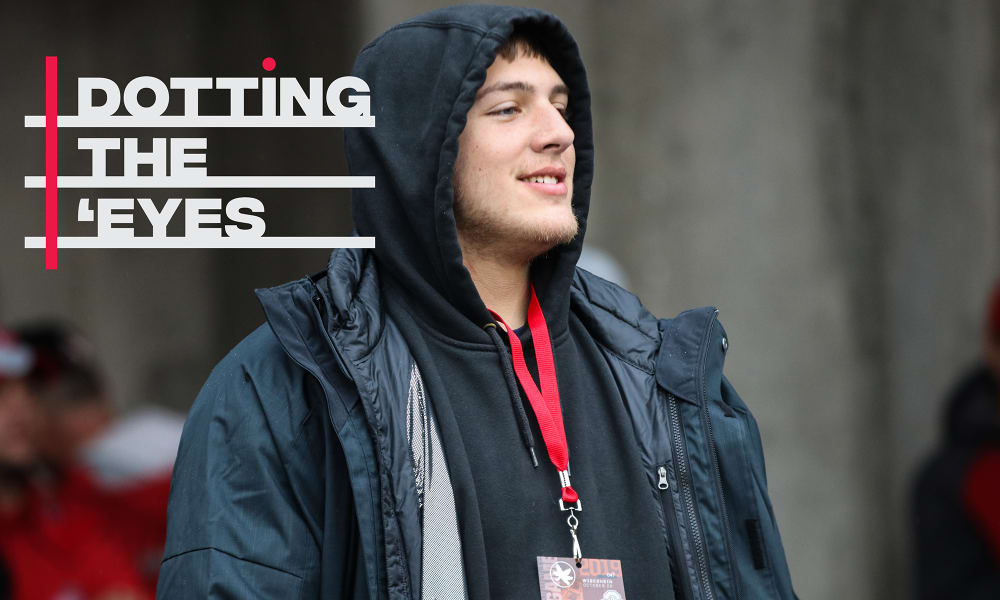 Stay in touch or be left out because Ohio State recruiting is a 24-hour, seven-day-per-week obsession. What’s the latest news as the Buckeyes build for the future? Get that and more Sunday through Thursday on Lettermen Row. Tuesday’s notebook catches up with Michigan offensive lineman Garrett Dellinger, New Jersey standout Duce Chestnut loves Buckeyes visit and awaits an offer.

One of the top prospects in the Class of 2021 made his first visit to Ohio State in five years over the weekend as the Buckeyes hosted Wisconsin.

Garrett Dellinger, Michigan’s fifth-ranked junior, headed to Columbus rather than checking out Michigan and Notre Dame — two of the presumptive favorites in his recruitment — in order to give his father a chance to do something he’s been wanting to do.

“I chose to go to the Ohio State game over the Michigan game because my dad has never been to a game there at Ohio State,” Dellinger told Lettermen Row. “He is deploying to Iraq on Dec. 1 for six months, so we wanted to make sure we fit a game in there before his work got a little crazy.”

That doesn’t mean the 6-foot-6, 280-pound offensive lineman at Clarkston High School, ranked by 247Sports.com as the country’s No. 1 offensive guard in the Class of 2021, isn’t sincerely interested in the Buckeyes. Dellinger certainly is listening to Ohio State, and even though he lives in Michigan, he’s not a player who has let fandom affect his recruiting much to this point.

“I don’t necessarily have a [favorite] team, because growing up I moved around the country due to my father’s job,” Dellinger said. “My older brother [Matt] was a linebacker at Kent State, so that was my favorite team. But otherwise I am very open-minded to any school. It’s about whichever one best fits me.

“My sister played volleyball and graduated from Western Kentucky, and my other 3 siblings attended Kent.”

As mentioned, Dellinger returned to Ohio State for the first time since 2014 when his brother and the Golden Flashes took on Ohio State, so this trip had a slightly different feel to it.

“I had a great visit, even in the rain and I have a great connection with [Ohio State offensive line] Coach [Greg] Studrawa,” he said. “I talk to Coach Day and Coach Stud multiple times a week, and I am very excited about Ohio State.

Ohio State has some major competition for Dellinger outside of the Midwest as well. The lineman, who once lived in Alabama, also considers Florida, LSU and the Crimson Tide among his favorites along with the Buckeyes, Wolverines and Fighting Irish. The decision won’t be an easy one from here.

“I am playing basketball now and I will attend the Future-50 Under Armour camp in December, and then I’ll probably make a decision in spring,” he said. “Fortunately, I have a tough decision ahead of me and I have many great schools to choose from. I will definitely choose a school that will have challenging academics and offers great opportunity to play in the NFL. Luckily my family will help me through this process.”

We talked about Camden (N.J.) defensive back Darian “Duce” Chestnut a week ago. And in that edition of Dotting the ‘Eyes, he talked about his excitement for his first trip to Ohio State.

The Buckeyes did not disappoint.

“It was amazing,” Chestnut told Lettermen Row. “You can tell the fans love Ohio state football. I got some good time sitting down and talking with the coaches and learning more about Ohio State.

“The best part was probably just sitting down and talking to [Ohio State co-defensive coordinator] Jeff Hafley, Ryan Day and [assistant secondary] Coach [Matt] Barnes. My family really liked the Real Life Wednesday things because it really showed the benefits for us outside of football life there.”

The chance to sit down and talk to the Ohio State coaches meant that Chestnut, who said a week ago that he’s always wanted to be a part of what he called “DBU” in Columbus, got a little closer to his goal of landing a Buckeyes scholarship offer. It may be coming down the line, but not just yet.

Can Buckeyes get back in mix for Bijan Robinson, Jaylan Knighton?
How often do recruits keep commitments private, silent?