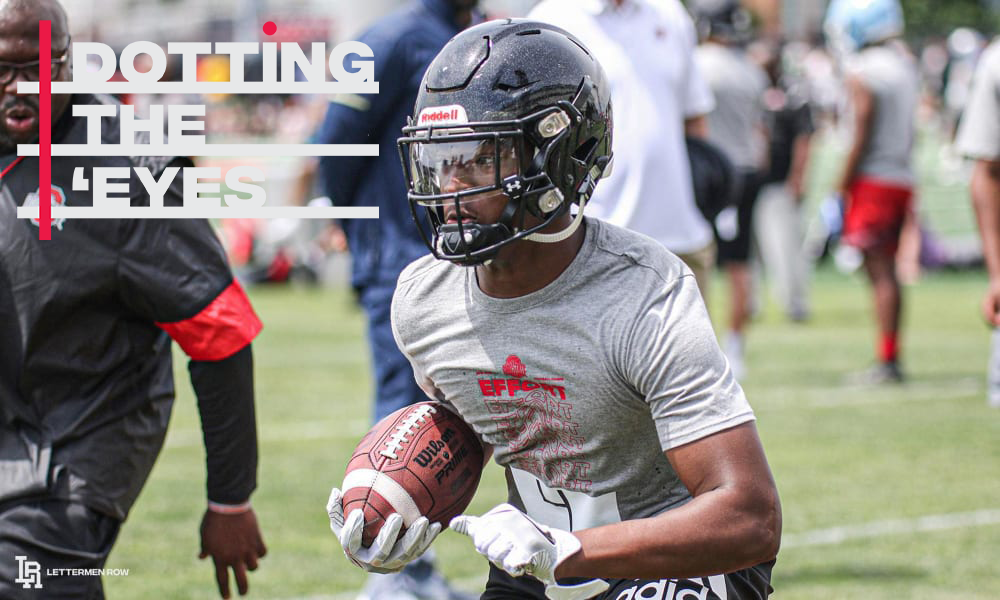 Ohio State target Evan Pryor said his recruitment will be over within the next month. (Birm/Lettermen Row)

Stay in touch or be left out because Ohio State recruiting is a 24-hour, seven-day-per-week obsession. What’s the latest news as the Buckeyes build for the future? Get that and more Sunday through Thursday on Lettermen Row. On Tuesday, we talk with a pair of top 2021 offensive line targets and update the recruitment of Evan Pryor, one of the country’s top-five-ranked running backs.

Pryor has plans to return to Ohio State in March after taking trips to Georgia and North Carolina in January. He’s also going back to Chapel Hill in early March as the home-state Tar Heels work diligently to keep him from venturing away for college. Those visits make it doubly important for the Buckeyes to get the 5-foot-11, 190-pound Pryor back on campus as soon as possible.

“We talk every day,” Pryor said of his relationship with Ohio State. “They’ve just been pushing me to get back on campus, trying to seal the deal. I won’t have a date until sometime next week because I’m running track, too. So, we’re trying to see if there’s a slot somewhere in there.”

A lot of times in recruiting it comes down to head versus heart, and the ultimate decision for Pryor is going to be a prime example of that. Staying close to home to play at North Carolina or heading off to a national power like Ohio State, Georgia or Penn State, Pryor knows there’s a challenge to each possibility. But he’s comfortable where he’s at right now, and he’s going to have a decision made in the near future, even though he doesn’t know yet where he’s heading.

His timeline is set, and it will impact his visit list in March, so count out any spring game visit to Ohio State.

“I plan on being committed before April,” Pryor said. “I’ll be back before then.”

Jager Burton continues to be top priority for Ohio State

Another one of the Buckeyes top 2021 targets is Lexington (Ky.) Frederick Douglass 4-star offensive guard Jager Burton. He’ll be back in Columbus next month and has a backdrop ready for it.

“I think when I go to Rivals Camp Series in Columbus, I’m gonna go to an Ohio State spring practice,” Burton told Lettermen Row. “I’m still talking to them every single day.”

It’s been that consistent communication with the country’s sixth-ranked guard and Kentucky’s No. 1-ranked junior prospect that has kept the Buckeyes in Burton’s top group. And that’s why Ohio State remains very much in the mix for his eventual commitment. He has a series of official visits planned and is aiming toward an August 24 decision day.

“They really do seem to think they can get me at Ohio State,” Burton said. “And they want to.”

The Buckeyes have made that obvious for the last year, and there appears to be no slowdown in their recruiting efforts. One program that was a top choice for Burton, Penn State, will not get an official visit from him following a staff change after Matt Limegrover was let go by the Nittany Lions in December. Oregon, Alabama, Kentucky and Clemson will get official visits from Burton now along with Ohio State. That visit to Columbus is likely to be over the weekend of June 12.

Spindler is aiming for the first weekend in May. If he uses all five, Ohio State is set to be his final official visit — which sets up an intriguing opportunity for Greg Studrawa and Ryan Day.

Dellinger is looking toward a late May or June visit.

“Absolutely they are [in line for an official],” the 6-foot-6, 280-pound Dellinger told Lettermen Row. “It’s in the works now. I will take them all after May 27, because that’s when my dad will be back [from overseas].”

Michigan and Notre Dame are both very much in the mix for the country’s No. 7 (Spindler) and No. 8 (Dellinger) ranked offensive tackles. But the Buckeyes aren’t backing out of the battle at this point.