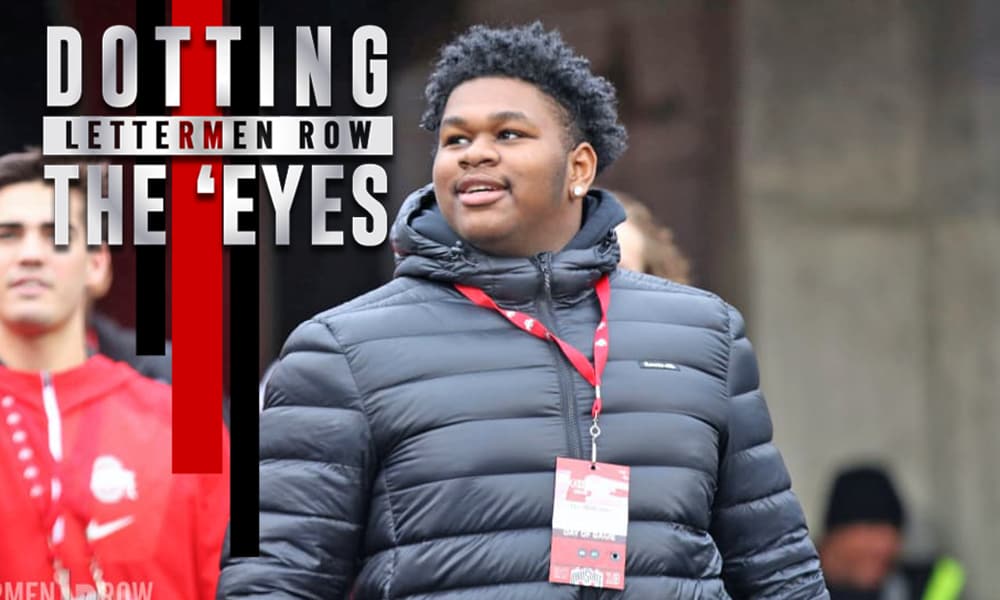 Stay in touch or be left out because Ohio State recruiting is a 24-hour, seven-day-per-week obsession. What’s the latest news as the Buckeyes build for the future? Get that and more Sunday through Thursday on Lettermen Row. Today’s discussion talks about a potential key loss in 2020 and Ohio State’s efforts to land Hawaiian offensive lineman Enokk Vimahi.

The Buckeyes had one official visitor to Ohio State’s campus today over the weekend and it was the country’s seventh-ranked guard, Enokk Vimahi. The Hawaiian lineman arrived in Columbus on Friday afternoon and was still in town Sunday morning.

Enjoying the stadium and the snow 🌰🌰🌰 pic.twitter.com/A8w4atk4sM

Vimahi’s 247Sports.com crystal ball is heavily slanted toward the USC Trojans and though there’s no doubt the Trojans have been the team to beat, people who spent the weekend around the 6-foot-4, 270-pound Vimahi believe Ohio State might’ve done enough to change the direction in his recruitment.

“He seemed like he was really enjoying it,” one source shared. “His mom had all her Ohio State questions answered and told people that they really loved USC but Ohio State just ‘blew them out of the water.’ I honestly think she’s sold on Ohio State.”

Mom being sold is only one piece of the puzzle, of course. The Buckeyes are going to have to sell the offensive linemen himself on the fact that playing time is available early in Columbus and that he can be part of a program that is solid and stable, whereas USC continues to struggle and is already losing players who signed in the 2019 class. The country’s 124th-ranked 2019 prospect was hosted by Wyatt Davis — who picked Ohio State over USC.

Ironically, it was also discovered during the weekend’s visit that Vimahi is actually related to a pair of Ohio State football players: Branden Bowen and Tommy Togiai.

A decision is expected on Feb. 6 but there’s no doubt the Buckeyes would love to land a public commitment from Vimahi sooner than that.

To cut right to it, long-time Ohio State commitment Doug Nester did make his planned official visit to Penn State this weekend.

Yes, it’s a visit that the Buckeyes really would’ve preferred he didn’t make and it’s hard to see any way that there are positives in his making the trip from the Ohio State perspective.

Penn State has been working very hard to flip Nester and he’s making his third visit to the school in the last three months. That would be concerning on its own but pairing that knowledge with the fact that he’s made two official visits to Ohio State in the last month and still didn’t shut down his recruitment sends up some pretty substantial concern balloons.

In the past, Nester has said that he will make no public declaration about a decommitment — or a reaffirmation with Ohio State — but would instead just sign his Letter of Intent on Feb. 6 with the school he’s decided on.

We’ll try and stay on top of this in the next day or two and see which way the wind is blowing. The Buckeyes have made retaining Nester their top priority in the last month-plus and losing him would be difficult to handle for Ohio State, despite the overall great job done by Ryan Day since taking over on Dec. 4.

Speaking of longtime commitments visiting other schools, Ohio State 2020 verbal — and absolute leader of the Buckeyes 2020 recruiting class — Paris Johnson spent his weekend in Knoxville visiting the University of Tennessee.

As we wrote back in December as the news of Urban Meyer’s retirement started to send shockwaves through the recruiting world, Johnson taking visits to other schools is something that is just going to happen. He’s now been to Notre Dame and Tennessee since and it’s reasonable to expect that he’ll make visits elsewhere in the future while still building his relationship with Ryan Day and his Ohio State program.

Fellow Cincinnati star Darrion Henry was one of the many major prospects visiting the Volunteers this weekend. As a reminder, Henry is one of the players Johnson mentioned when Jakob James committed to the Buckeyes last week.

There are a number of colleges around the country that had big junior weekends over the last few days, including Clemson. The Tigers hosted dozens of the bigger-name players in the country and were expected to host 5-star receivers Rakim Jarrett and Julian Fleming, though neither of them ended up making the visit.

One player that did make the visit — and ended it by committing to Clemson — was Jarrett’s teammate at St. John’s College (Washington, DC) High School, Tre Williams.

Williams, the country’s sixth-ranked defensive tackle, was offered a while ago by Ohio State but the Buckeyes have not been aggressively recruiting him in recent months. He’s a very talented young player with high upside along the defensive line but he’s also valuable as a recruiter because of his relationship with Jarrett and 5-star linebacker Mekhail Sherman.

Clemson very rarely “loses” a commitment so I’m not entirely optimistic that an eventual Buckeyes push here could result in a flip, but it will be worth watching how Williams’ decision now impacts his teammates.