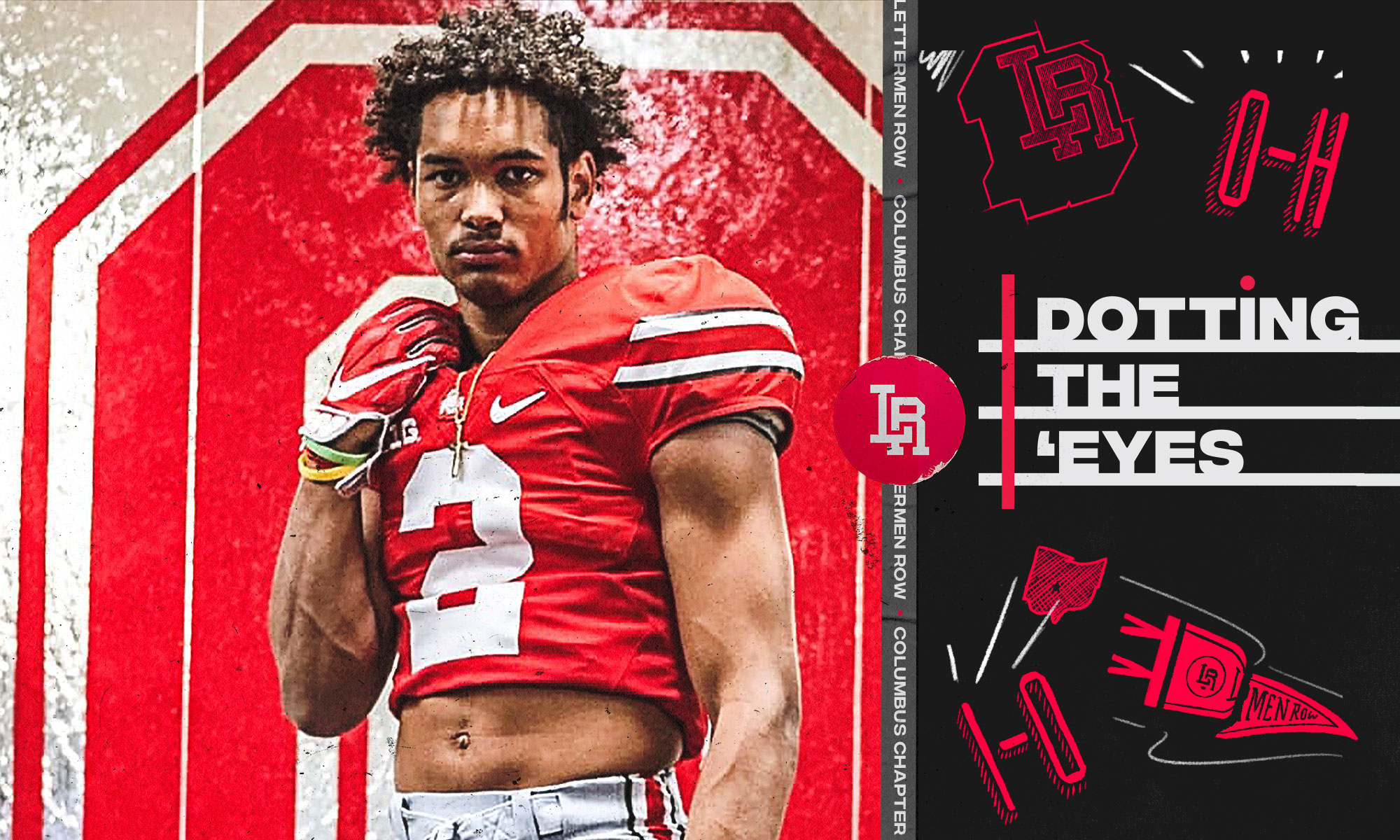 Emeka Egbuka has been to Ohio State twice and that gave the Buckeyes an early lead in his recruitment. (Emeka Egbuka/Courtesy)

Stay in touch or be left out because Ohio State recruiting is a 24-hour, seven-day-per-week obsession. What’s the latest news as the Buckeyes build for the future? Get that and more Sunday through Thursday on Lettermen Row.This afternoon’s notebook has the latest thoughts on a pair of the Buckeyes top remaining 2021 targets.

The Buckeyes have prioritized 5-star wide receiver Emeka Egbuka since the Steilacoom (Wash.) High School two-sport standout first visited campus in March of 2019. That trip firmly established Ohio State as a leader in his recruitment, and since then it’s been a slow burn between the Buckeyes and the country’s No. 1-ranked receiver. He visited Columbus for a second time last October and had both a spring visit and summer visit scheduled for this year, including an official visit in June.

Those trips didn’t happen, obviously. That has turned out to be unfortunate for Ohio State because the widespread belief has been that if Egbuka made those trips, he’d likely be committed to the program by now. But instead, it seems the real intriguing part of his recruitment is still ahead of us.

Oklahoma, which seemed kind of like a last-minute, surprise addition to Egbuka’s final-four school’s list, has been making a really strong push for the 6-foot-1, 190-pound athlete. That push has been led on a peer-to-peer level by 5-star quarterback Caleb Williams. According to one source in Columbus, Williams has done a “really good job, a really good job” in his efforts to chip away at the lead Brian Hartline and Ohio State have established.

Egbuka has never visited Oklahoma, but in recent weeks there’s been a groundswell of optimism emanating from Norman that he would do that “very soon.” A tweet by Williams on Wednesday night perhaps shed a bit more light on exactly what that means.

Since college football recruiting remains in an extended dead period of unknown length, the speculation has been that Egbuka may be forced to make his desired campus visits on his own — meaning without the chance to meet with coaches. Now the Sooners Summit concept seems to indicate that Williams and other Oklahoma commits and targets intend to be there at the same time, effectively using the campus and town of Norman as a meeting ground.

That’s an interesting idea, something similar to what Denzel Burke suggested that Buckeyes commits had been tossing around. If it does happen and Egbuka or J.T. Tuimoloau make that trip, then things could very interesting in these recruitments. Of course, that’s if these sort of visits are actually permissible — and that remains in doubt. The NCAA has very recently announced an interpretation related to unofficial visits that suggests the idea may not be allowed.

“The question was whether or not it would [be] permissible for a prospective student-athlete to visit campus on their own,” the release said. “And then make a video call [FaceTime, Skype, Zoom, etc.] to a coach who would essentially give them a virtual campus tour. The NCAA determined that this would not be permissible at this time during the dead period.

“Coaches and staff are not able to set up or facilitate a prospect’s trip to campus during a recruiting dead period.”

So, is Oklahoma able to do this under the guise that the coaches aren’t responsible for arranging the trip? Is there a loophole by suggesting that current Sooners players with a pre-existing relationship with one of those players giving the tours changes the interpretation of the rule? I guess we’ll see.

There’s another wrinkle in play here that could also add a layer of intrigue. The state of Washington announced earlier this week that it would be moving football to the spring, putting Egbuka and other players in the state in a position where they’d have to choose between skipping their senior seasons to enroll early or abandoning their plans to get to college in January. This tweet by Egbuka on Wednesday night could be a hint as to which direction he’s leaning, and if he decides not to enroll early his recruitment could stretch into February or later.

Egbuka has been adamant that he’ll make no decisions until he’s able to get back to the schools he’s interested in again, and that includes Ohio State. The problem here is figuring when he would be able to do that if the NCAA doesn’t allow on-campus recruiting again for 2021 prospects. That’s why, despite a long-time lead in his recruitment, there is a sense that things are getting a little less comfortable for the Buckeyes than they’ve been before. He’s been to Ohio State twice, so if he and his family are paying out of pocket for a trip to a college campus just to see it, it probably makes more sense for that to be in Oklahoma. It’s just going to be a little unsettling for the folks in Columbus, especially if both parents make the trip to Norman as is being speculated.

Bottom line? Stay tuned, because the fight for Emeka Egbuka isn’t going to be for the feint of heart.

There’s still a need for more help on the offensive line in Ohio State’s 2021 class. Now the Buckeyes have taken one more step toward achieving that goal on Thursday as they were included in the final five schools for 5-star offensive tackle Tristan Leigh as expected.

The Virginia native has visited Ohio State just once. But like Egbuka, Leigh has been taking his time in his recruitment and trying to be patient as the NCAA dead periods continue. Like Washington, Virginia has cancelled fall football for high school athletes, so there’s plenty of time and opportunity for Leigh to get back to college campuses if things get reopened. There’s been a big push by the Buckeyes in the last two-plus months to get themselves into the front of Leigh’s mind.

LSU has been considered the favorite for a while now, but Ohio State and Oklahoma have been surging. There’s no doubt that many other programs, including those that don’t make his final five, will continue to push for the 6-foot-5, 270-pound lineman.

Sure, there’s a lot of time left in the 2021 cycle and an entire 2022 recruiting cycle after that. But the Buckeyes are looking into the future and offered an offensive line prospect in the Class of 2023 with some serious upside.

His name is T.J. Shanahan, he’s from Timber Creek (Orlando) High School and he’s now the third prospect in that class to be offered by Ohio State.

Shanahan is 6-foot-5 and 300-pounds, and he is ranked as the No. 1 offensive line prospect according to long-time recruiting analyst Tom Lemming. The young lineman called the scholarship offer from the Buckeyes a game-changer for him.

“I was very surprised,” he told Lettermen Row. “It really means a lot for a big program like this to offer me this early in my recruiting process.”

Tony Alford was the coach to offer Shanahan. Ohio State went to the wire for running back Jacques Patrick in the Class of 2015, so Alford’s presence as a recruiter is well-known in that area. The Buckeyes, of course, are a known commodity to every young football player.

“I don’t know a whole lot about Ohio State, but Ohio State is just a name in itself,” Shanahan said. “To me, it means a lot that a program like that would would take a chance on me, and I’m more than blessed for the opportunity to receive an offer from such a great program.”